A Win For All 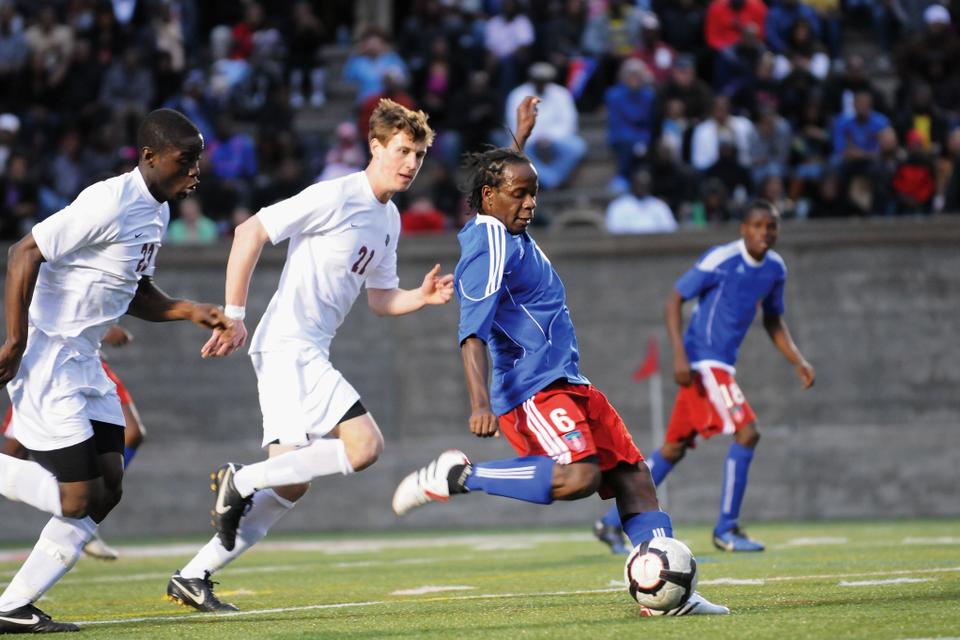 At a Harvard Stadium full of spirit and emotion, the Harvard men’s soccer team welcomed the Haiti national team and fell in a penalty shootout, 4-1. By Meredith H. Keffer
By Scott A. Sherman, Crimson Staff Writer

Almost immediately, one got the feeling this wasn’t a normal exhibition soccer game.

From the Haitian music, vendors, and food at the pregame tailgate, to the drums, horns, dancing, and “olé” chants in the stands once the match began, it was clear from the start that this game meant something more.

Over 11,500 people attended the Harvard men’s soccer team’s exhibition match against the Haitian national team last night. Almost all of them were Haitian-Americans who vocally supported their native country from the start, proudly waving Haitian flags and giving Les Grenadiers a standing ovation when the squad came out for the first time.

It was only fitting that such a contest would come down to the most dramatic of finishes, with the 2007 Caribbean Cup winners pulling away to win 4-1 on penalty kicks after a scoreless 90 minutes in which Harvard outplayed the 99th-ranked team in the world for much of the match.

“The official title of the event is ‘Haiti lève,’ which means ‘Haiti stand up,’” Crimson coach Carl Junot said. “The idea for us was to draw national pride, get the Haitian community within the Boston area to come out and support their country, and that’s exactly what happened. So it was absolutely a special environment today.”

After both the Haitian and American national anthems were sung, the game began, and Les Grenadiers outplayed Harvard in the early going.

Haiti had its first good chance to score eight minutes into the match with a corner kick, but an ensuing header sailed wide left. Les Grenadiers had another opportunity soon after when Crimson junior goalie Austin Harms came out to block a header attempt and left the net exposed, but the Harvard defense was able to clear.

The Crimson’s first great look came nearly 28 minutes in when Ben Tsuda had a breakaway, but the junior missed wide left.

Moments later, freshman Kyle Henderson had a wide-open look with no defenders between him and the net. Haitian goalie Peterson Occenat dove and redirected Henderson’s attempt to Harvard junior Jamie Rees, who fired on goal again, but Occenat made another leaping save as the crowd roared in delight.

The fast pace continued a minute later, when Haiti’s Jean Voltaire drilled a shot from 30 yards out, but Harms made a leaping save to keep the game scoreless.

At 33:45, Harvard freshman forward Connor McCarthy made a beautiful move around his defender and got a great look at the goal, but Occenat made a diving save on a ground ball shot. Five minutes later, the rookie took a cross-pass and fired on net, but Occenat made another diving stop.

“I’m in position to make those plays,” McCarthy said. “The team put me in great spots, but I wasn’t coming away with goals today. A lot of the zeros on our part is definitely on my shoulders.”

After a header attempt by Crimson sophomore Richard Smith in extra time sailed wide, the game went into the half scoreless, with Harvard outshooting Haiti 10-4 in the period.

“I thought the backs did a great job,” McCarthy said. “They held a very good team to very few opportunities, and the opportunities they held them to, our goalkeepers did well [to clear out]...The defense was excellent today.”

The Crimson was in total control in the more-physical second period, despite not playing any of its seniors or its 2010 leading scorer, sophomore Brian Rogers. But the team could not finish late, despite a myriad of opportunities.

Sophomore Zach Wolfenzon had a chance on a cross-attempt in the 86th minute but couldn’t put it past Occenat, and nobody was on the far side to put it away.

As the crowd got louder, Haiti’s Ricardo Charles attempted to win it with a lefty shot from 35 yards out in the 89th minute, but the ball sailed over the head of Harvard junior goalkeeper Brett Conrad, who had replaced Harms for the second half.

The Crimson then had three good looks during extra time, but couldn’t put the match away.

First, McCarthy got open on a breakaway, but Occenat sprinted out 30 yards to break up his attempt. Then, Harvard freshman Kevin Harrington had a great look and sent a shot right on net, but Occenat lept to his left and deflected it over the goal. Finally, McCarthy broke through once more and had a chance from the side of the goalie box, but Occenat made the block.

“The purpose of our spring soccer is to develop our team,” Junot said. “I think we could’ve been a little bit better on the offensive side of the ball to put the game away.”

The buzzer sounded with no score, so the contest went to penalty kicks to determine the winner.

The first shooter, Haiti’s Junio Clairssainvil, got Conrad diving the wrong way and scored as the crowd erupted, but the Crimson’s Scott Prozeller provided the equalizer.

After Les Grenadiers scored twice more and Occenat denied attempts by Tsuda and Wolfenzon, Haiti’s Jean Baptise lined up as the stadium grew louder in anticipation. Baptise beat Conrad, and the crowd celebrated in jubilation while the Haitian players mobbed Baptise on the field.

Despite not coming away with the win, Harvard players said they were glad to have the opportunity to play in front of the Haitian community that is still recovering from the devastating earthquake of January 2010.

“It was great,” McCarthy said. “[Haiti’s] got real soccer fans. They really appreciate their sport and their country, but I didn’t hear anything negative from them; it was all positive. It was a good experience.”