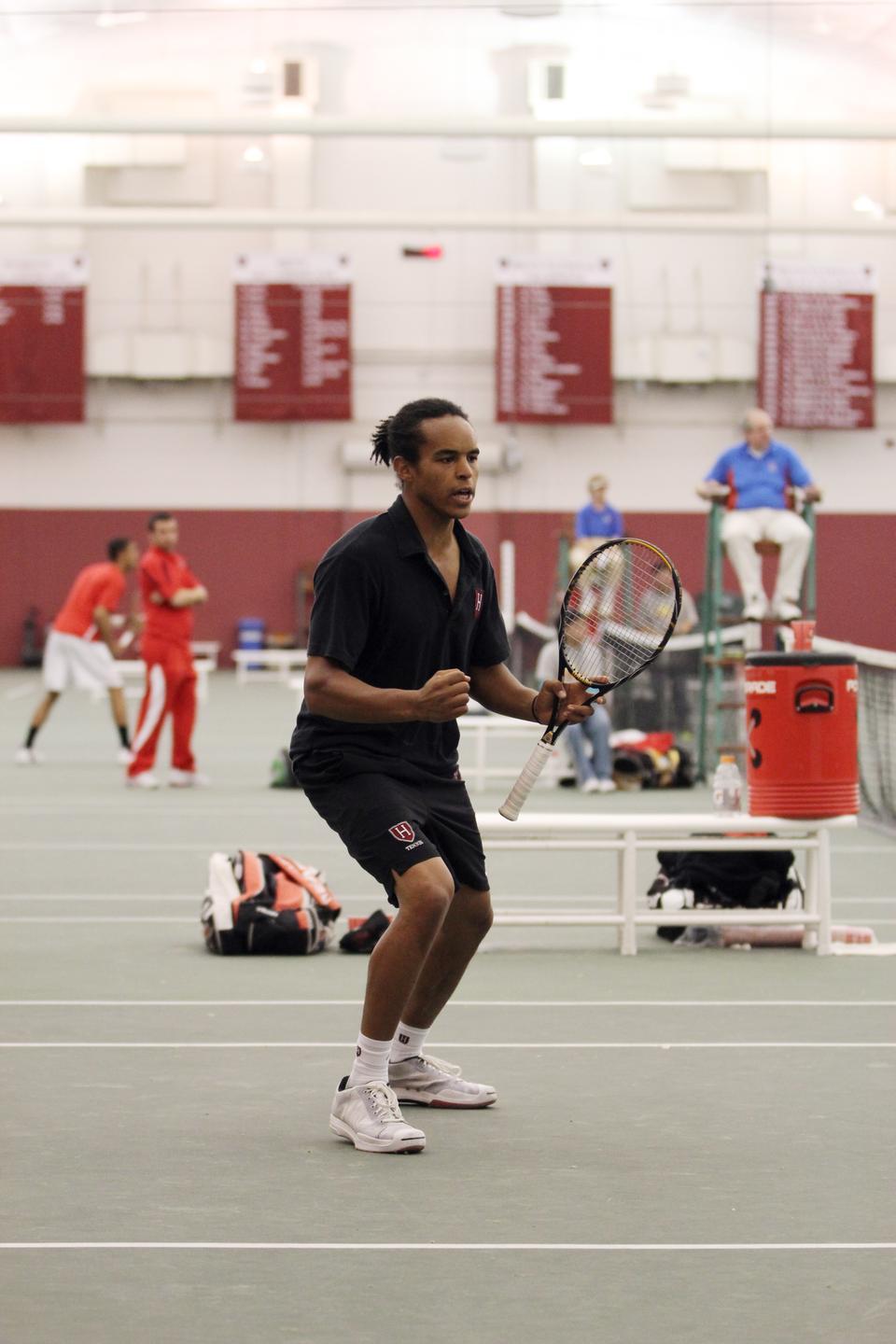 Though he and Casey MacMaster lost twice at the top doubles position, captain Aba Omedele-Lucien—shown here in previous play—took down the No. 2 singles player of both Penn and Princeton this weekend. Harvard pulled away for a 5-2 win against the Quakers Saturday but lost yesterday to Princeton. By Angeline L. Baniqued
By Steven T. A. Roach, Crimson Staff Writer

The Harvard men’s tennis team has proven this season its ability to rely on its doubles play, winning nine of the last 10 doubles points in dual matches.

But the team’s success in singles play is what gave the squad its edge this weekend.

The Crimson traveled to Penn (12-5, 1-4 Ivy) and Princeton (12-6, 5-0) for two conference duals, facing Penn on Saturday and Princeton yesterday. Harvard (13-9, 2-2) first defeated the Quakers, 5-2, by sweeping five of the six singles matches, but then fell to Princeton, 4-3, despite picking up three singles victories.

In one of Harvard’s longest matchups of the year—lasted over five hours—the Tigers narrowly prevailed over the Crimson, 4-3, for the squad’s ninth loss of the season.

“It was a big disappointment, but we fought, and I’m proud of the way the guys fought,” Harvard coach Dave Fish ’72 said. “We had a couple of matches that just didn’t quite go our way today...you couldn’t ask for any more fight.”

The Crimson displayed this fight in the doubles matches, but it lost two of the three to forfeit the doubles point. Captain Aba Omodele-Lucien and freshman Casey MacMaster and junior Ali Felton and sophomore Andy Nguyen both lost their matches, 9-8 and 8-4, respectively.

Harvard had already lost the doubles point, but junior Jon Pearlman and sophomore Josh Tchan earned the squad’s sole doubles win of the weekend with a 9-8 victory.

Moving into the singles matches, Harvard needed four to earn the victory over Princeton, but the team only managed to win three.

Nguyen was the first Crimson player to win, cruising through his match in straight sets, 6-4, 6-4.

Omodele-Lucien pulled through in three tough sets against the Tigers’ Matt Spindler.

The two traded the opening sets, but Omodele-Lucien rolled though the final set, 6-2.

MacMaster had a much tougher battle on his hands, going to three tiebreakers to decide the match. MacMaster lost the first set but came back in the second and third sets to win, 6-7, 7-6, 7-6.

Harvard’s doubles play has usually gotten the squad off to a good start, but the Crimson’s singles play earned the unranked squad a victory against the Quakers. All three pairs dropped tight matches to their opponents to forfeit the first point of the afternoon to Penn.

MacMaster and Omodele-Lucien lost to Eugen Brazdil and Hicham Laalej, 8-4, and Pearlman and Tchan followed with a 9-7 loss to Zach Katz and Ivan Turudic.

Felton and Nguyen pushed their opponents into the tiebreak, but eventually Nikola Kocovic and Mark Milbrandt came out victorious, 13-11, in the breaker for a 9-8 win.

“It was pretty interesting, because after we lost the doubles point, the Penn team was celebrating as if they had already won the match,” Nguyen said. “Coach [Fish] talked to us and said ‘They already think they’ve won,’ and told us that if we fight and do what we need to do, we could win the match.”

Despite the three losses in the doubles matches, Harvard rebounded to win five of six singles matches, three of them in straight sets.

Tchan dropped just four games in total en route to a 6-0, 6-4 victory. Omodele-Lucien battled in two close sets to earn another point for his squad, 6-4, 6-4.

Pearlman and Nguyen also pulled out key victories for the Crimson but needed three sets to do so.

Pearlman’s opponent, Laalej, steamrolled the Harvard No. 1 in the first set, 6-2, but then Pearlman battled back in the second to take it 7-5 and even the match at one set apiece.

Similarly, Nguyen dropped the opening set to Jason Lin, 6-4, but he then turned the match around in the second and third sets. Nguyen earned the victory 4-6, 6-4, 6-4.

“[After the first set], I figured out that trying to drive the ball through the court wasn’t going to work, because he was getting all of the balls back,” Nguyen said. “I started to hit more angles, and it gave me more room to dictate with my forehand ... I knew I could come back. It was close, and I fought.”