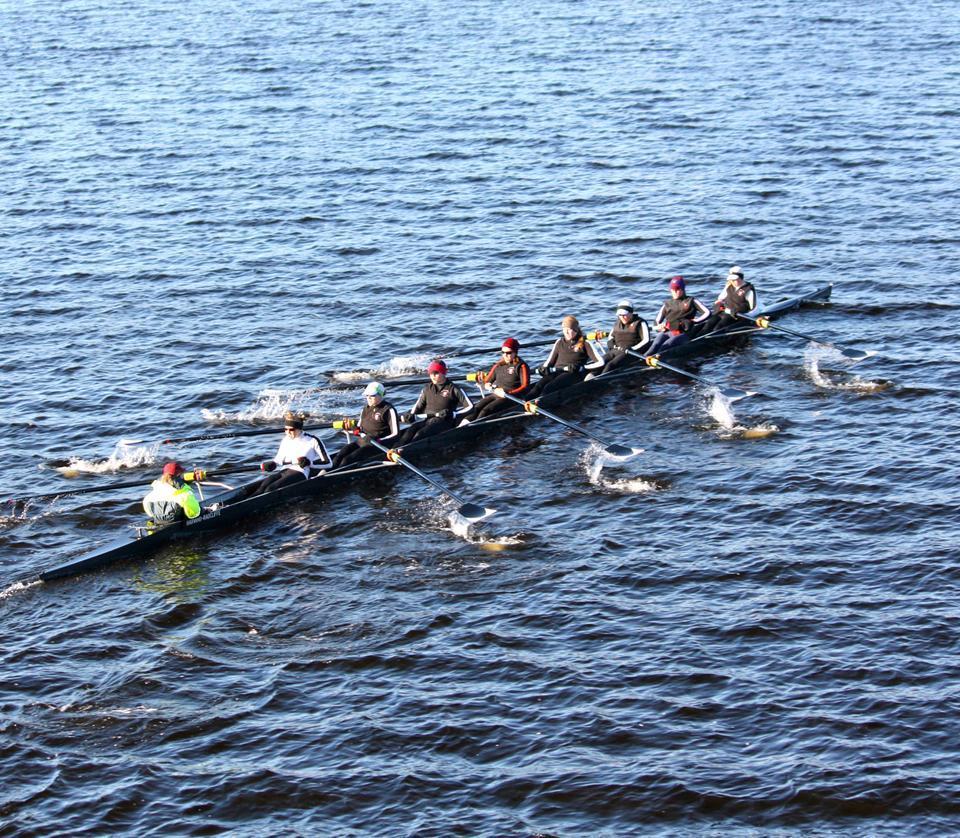 Shown here in earlier competition, the Radcliffe crews came away with mixed results after this weekend’s races, as the lightweights defeated Georgetown to keep the Class of 2004 Cup for a third consecutive season, while the heavyweights were defeated by both Princeton and Cornell. By Danielle L Lussi
By Oluwatoni A. Campbell, Crimson Staff Writer

Although both Black and White teams were greeted with perfect weather and ideal rowing conditions—the heavyweights on the Charles and the lightweights on the Potomac River—the crews achieved mixed results.

The Radcliffe lightweights defeated Georgetown to keep the Class of 2004 Cup for the third consecutive season, while the heavyweights suffered losses at the hands of both Princeton and Cornell.

Next weekend, the Black and White lightweights will race on home water against Stanford, while the heavyweights will line up against Syracuse, Ohio State, Dartmouth, Minnesota and Louisville in the Charles River Invitational and the O’Leary Cup.

“Most of these teams that we will be facing are ranked higher than us,” sophomore heavyweight Marisa D’Orsogna said. “They are going to be hard teams to beat, but I think that we have a good chance of fitting right in with them or even standing out.”

NO. 18 RADCLIFFE HEAVYWEIGHTS VS. NO. 1 PRINCETON/NO. 13 CORNELL

The performance of the heavyweight crew proved to be rather disappointing last Saturday, as the varsity eight, varsity four and third varsity eight crews each placed third in their races, while the second varsity eight placed second.

In the third varsity eight, both the Tigers and Big Red took quick jumps off the line and maintained quick stroke rates to finish in 7:24.9 and 7:29.4, respectively, with Princeton taking the top spot.

The Black and White finished six seconds behind Cornell with a time of 7:35.8.

During the second race of the day, the Radcliffe varsity four took an early lead off the line, but surges by both the Tigers and Big Red in the second half of the race would ultimately leave the Black and White far behind.

At this point, the race became tightly contested between Cornell and Princeton, with the Big Red finishing first with a time of 7:50.3, and Princeton in a close second at 7:51.4. Radcliffe finished in 8:10.3.

But by midday, the Black and White had shaken off its early morning blues.

In the second varsity eight, Radcliffe finished a second ahead of Cornell in 7:04.5 but behind a fast-moving Princeton, which placed first with 6:55.4.

Princeton took an early commanding lead over both Cornell and the Black and White and never looked back, as the Tigers finished in 6:36.8 to win their third event of the day.

Radcliffe and the Big Red jostled for second place with Radcliffe holding the edge by the halfway mark of the race, but ultimately fell to a late surge by Cornell, its time of 6:48.1 just behind the Big Red’s 6:46.1.

“It was disappointing falling short of Cornell in the [varsity eight],” said Black and White heavyweight captain Olivia Coffey. “It was a really hard fought race, but in the end Cornell just squeezed us out. However, there are really easy technical things that we can fix that can give us a two-second edge in future meets. But it was disappointing losing to Cornell, but they did deserve it.”

NO. 4 RADCLIFFE LIGHTWEIGHTS VS. NO. 5 GEORGETOWN

In the first real test of the dual meet season for the Black and White lightweights, the fourth-ranked squad faced off against No. 5 Georgetown in the Potomac River last Saturday.

Following their final strokes in the water, the Radcliffe lightweights walked away with not only their first trophy of the spring season—as they took home the Class of 2004 cup for the fifth time in the trophy’s seven-year history—but also with their first victory against a top-five opponent this year.

The Black and White took an early lead over the Hoyas and led by a boat length as the two crews reached the 1,000-meter mark.

However, in the closing lengths of the course, Georgetown surged forward to close the gap with Radcliffe, but in the end, the Black and White lightweights proved to be too experienced and strong for the Hoyas.

Radcliffe’s varsity eight finished first with a time of 6:51.0, while Georgetown finished in 6:52.4.