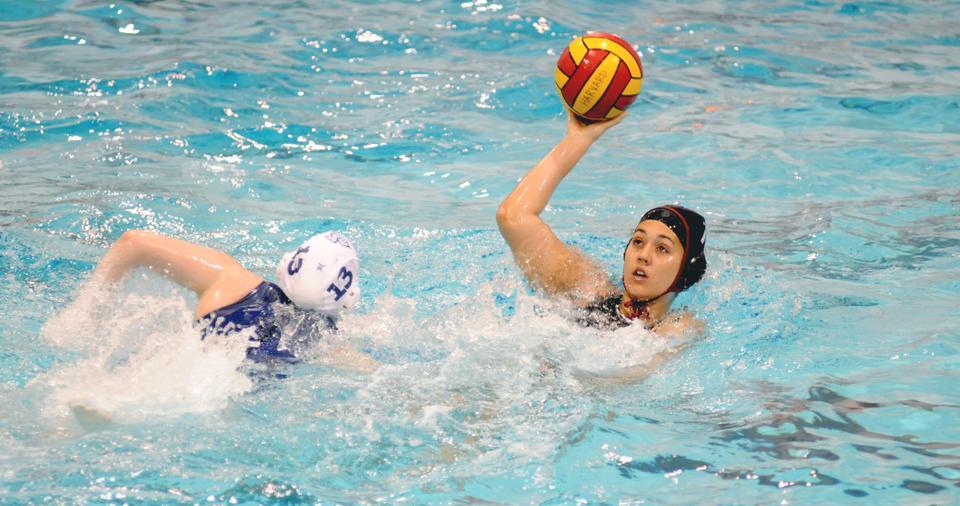 Sophomore Elise Molnar, shown above in previous play, led the team in scoring and assists with two in each category in Saturday’s 11-5 loss against Princeton. Molnar then contributed three assists in the Crimson’s win over Bucknell. Harvard couldn’t contain Michigan, dropping the encounter, 13-10. By Nida Naushad
By Patrick Galvin, Crimson Staff Writer

In yesterday’s early morning game against No. 6 Michigan, Harvard women’s water polo was finally able to apply those lessons it learned playing big-name teams on its California road trip earlier this season.

Although the Crimson was unable to pull out a win over the Wolverines (25-4), it was at least able to offer a solid 13-10 competition just as it did against No. 2 Cal and No. 9 San Jose State over spring break.

The Crimson went 1-2 in its opening series of Collegiate Water Polo Association conference games this weekend against No. 18 Princeton, Bucknell and Michigan at the Bison’s Kinney Natatorium. Harvard claimed its sole victory over the competition’s host, Bucknell.

“It was a good weekend for us,” sophomore attacker Aisha Price said. “We improved in a short period of time, and we’re getting more confidence within ourselves as we go.”

The Crimson had to come prepared to face the Wolverines, one of its toughest opponents on Harvard’s schedule.

“Bucknell did a good job of making us think on defense,” Price said. “We had to know where to pass the ball, where to drop the ball, where to help each other out. After getting so many ejections in that game, in the Michigan game, we used those lessons and were on our toes and able to play smart defense.”

“We played really well and only lost by three, which is a huge credit to our team,” she added.

The Crimson defense worked primarily to stop Wolverine counterattacks, as size and speed were both on Michigan’s side, according to Zdrojewski.

“Offensively, we were hoping to build off our defense,” the junior said. “We wanted to get a lot of movement going, get them out of their comfort zone, and I think we were successful in doing that.”

The women may have successfully shut down Wolverines’ defense, but their efforts against the Michigan offense were not enough and landed Harvard on the wrong side of its second three-point game of the weekend.

A game marked by numerous ejections and a few near-kickouts for Harvard players, Saturday afternoon’s matchup against Bucknell (10-12) allowed for a total of seven Crimson players to contribute goals to the final 16-13 tally.

“There were a lot of people who had two ejections, so we had to dig deep into our bench for players,” said Price, who led Harvard with five goals against the Bison. “That allowed people to a get a lot of minutes and others to get a lot of scoring opportunities.”

The frequent drives and constant movement that help characterize Bucknell’s offense enabled the Bison to draw a high number of ejections as well as keep the score close throughout much of the game.

But once the Crimson was able to adjust, Harvard pulled ahead in the fourth to take the win.

“They’re a pretty tricky team,” Price said. “They were able to get inside water on us and they drove a lot. We’ll just need to keep working on our drive defense.”

In addition to the difficulties associated wtih Bucknell’s mobile offense, the Crimson needed to overcome the challenges posed by the Bison’s depth.

“They have a larger team than we do,” Zdrojewski said. “They were able to replace their six whenever. They always had a group that was fresh.”

Harvard’s first points of the weekend did not come until after Princeton (16-9) finished its significant 6-0 run in the opening minutes of Saturday morning’s game.

The Crimson was able to recover in the second half, holding the Tigers point-for-point throughout the remainder of the game.

“Once we were able to get a point on the scoreboard, in the second half, we really got the momentum going, “ Zdrojewski said. “We went on a four-goal run. We were able to figure out everything that was going on in this half and were really able to put the ball away.”

But the early six-goal deficit proved to be too much for Harvard to overcome, as that familiar gap stayed on the scoreboard until the end of the game.

Although Princeton is a ranked team, Harvard believes a win over the Tigers is definitely feasible should the two teams meet again at the Eastern Championships. Additionally, this weekend indicated to the Crimson that it has potential to overthrow these ranked teams in future competitions.

“After the Michigan game, we came out smiling and laughing, because it really showed us we can play with the best teams on the East Coast,” Zdrojewski said. “It’ll push us through practices and prepare us for our games next weekend and for the Eastern Championships, and hopefully, we’ll be able to beat [those teams] at that point.”

—Staff writer Patrick Galvin can be reached at pgalvin@college.harvard.edu.