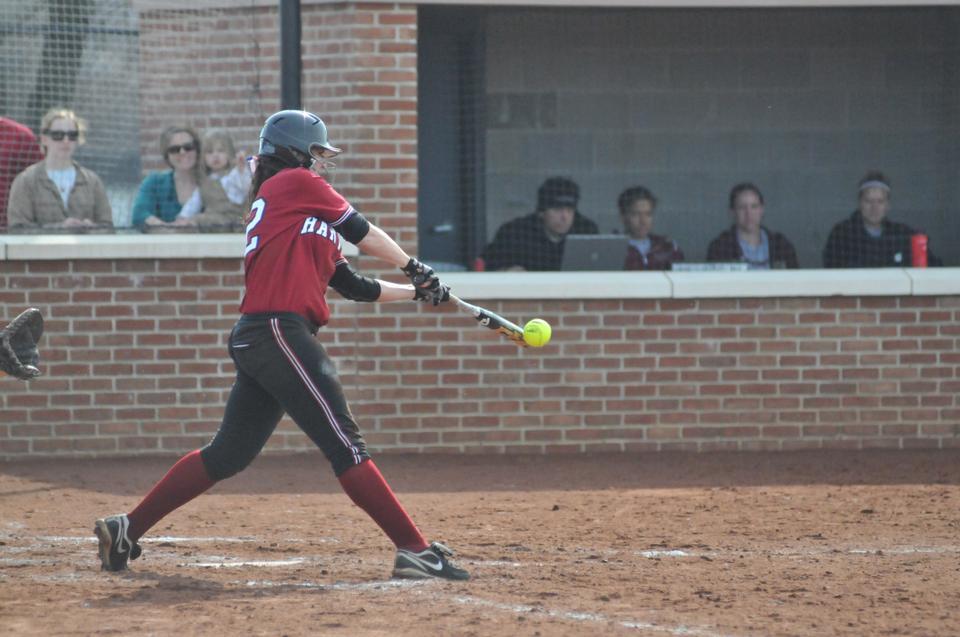 Freshman infielder Kasey Lange, shown here in earlier play, smacked seven hits and totaled eight RBI in four games this weekend at Brown. The rookie helped Harvard to a clean sweep of the North Division rival Bears, which totaled just four runs over the four-game set to the Crimson’s 35. By EMILY A. PEREIRA
By B. Marjorie Gullick, Crimson Staff Writer

“Everything came together this weekend,” sophomore Stephanie Regan said. “Our pitchers were awesome; our offense was awesome ... it’s Harvard softball the way we want to play it.”

In the final game of the weekend, it took four innings for Harvard to get going—but once the bats began connecting, they never stopped.

Regan got the ball rolling, slamming a hit to left field for a single, and she was followed by freshman Kasey Lange, who sent her to third base off of a double.

Once Regan was in scoring position, junior Whitney Shaw sealed the deal with an RBI bunt, bringing Regan in and gaining first base. Immediately after, Lange and Shaw were brought home off of a homer from another freshman, Allison Scott.

“It took us a while to put the hits together and get runners into position, but once we did, we didn’t slow down,” Harvard coach Jenny Allard said. “[The players] put everything they could into the game ... and really came to play.”

The Bears struck back in the bottom of the fourth, with Kat Strobel logging a single home run to put her team on the board. The homer would be the only tally of the game for Brown, which ended the weekend with a meager four runs, compared to the Crimson’s total of 35.

Harvard went on to score seven more runs in the game, with Scott recording her second home run of the game and Shaw also drilling a solo home run in the top of the sixth and a two-run homer in the top of the seventh. Freshman Laura Ricciardone recorded the win.

In the most competitive game of the series, the Crimson came off of a strong Saturday showing to face both the exhaustion of a doubleheader and the determination of the resilient Bears.

“Game three was hard,” Allard said. “We were fatigued after playing so hard yesterday ... but we finally came together.”

Co-captain Ellen Macadam started Harvard off in the top of the third inning, capitalizing on a bunt to take first base. She then stole second and was driven to third off a sacrifice bunt by Regan.

But Lange ultimately brought Macadam home off of a fly-out to center field. Regan, Macadam, and Lange collaborated again in the top of the fifth to garner two more runs for the Crimson, which had allowed a Brown home run in the previous inning.

After Macadam singled to reach first base, with teammate freshman Shelbi Olson in scoring position at third, Regan again offered a sacrifice RBI bunt that drove Olson home and Macadam to second. Lange then followed with a single up the middle to bring in Macadam.

The powerful trio struck yet again in the top of the sixth to earn three more runs, bringing the score to 6-1, along with contributions from sophomore Ashley Heritage and junior Mari Zumbro.

The final run for Harvard came off of a solo home run from Scott, and junior pitcher Rachel Brown was able to clinch the win.

It took no time for the Crimson to reach the scoreboard in Saturday’s second game, with Regan giving Harvard a 1-0 cushion in the first inning after she came home on an RBI from Lange.

Macadam rose to the occasion in the third inning, knocking the ball to center for a triple and taking home after a ball slipped past the catcher.

Lange again brought Regan in off of a slap hit, earning another RBI. Shaw brought the lead to 4-0 after she took first on a fielder’s choice, was driven to third off of a double from Scott, and came home after an illegal pitch by a Brown hurler.

The Crimson earned five more runs in the game, while Ricciardone took care of business at the mound, allowing only four hits in the shutout—the first time Harvard has blanked its opponent in consecutive games since the 2009 season.

“The shutouts were huge,” Regan said. “It set the tone for the whole weekend that we were just going to dominate.”

In the opening game of the weekend, the Crimson left no doubt that it came to win. Although it took a few innings for Harvard’s offense to get fired up, it took control in the third inning, recording seven runs in the frame, and never backed down afterwards.

Solid hitting, accompanied by an outstanding pitching performance from Rachel Brown, gave the Crimson its first win of the series.

Brown allowed only one hit in the game, while earning 11 strikeouts, bringing her to her 15th win and fifth shutout of the season. Lange, Shaw, Scott, Heritage, and Zumbro all contributed to an unstoppable lineup.

“One of our biggest goals of the series was to get all three aspects of our game firing at the same time—pitching delivered shutouts, defense backed up the pitching, and our offense stepped up,” Shaw said. “This weekend really redefined what our swagger is.”