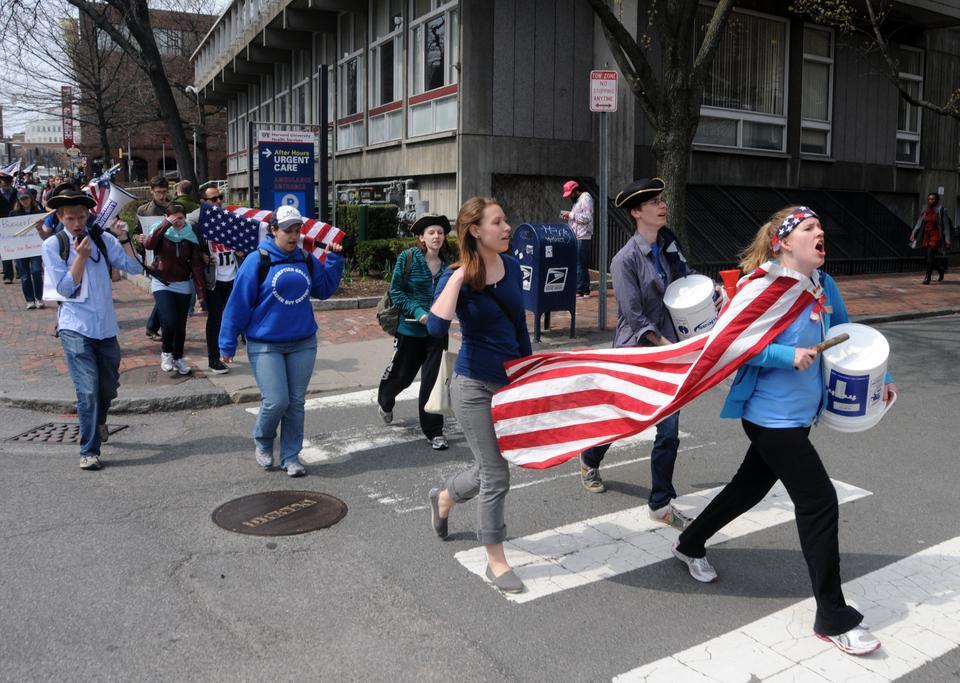 Dozens of protesters participating in the March for Common Sense pass through Harvard Square yesterday as they retrace Paul Revere’s ride from Boston to Lexington in reverse.
By Matthew T. Lowe, Contributing Writer

Led by several Harvard undergraduates, the March for Common Sense passed through Harvard Square yesterday, as part of a 13-mile route that retraced in reverse Paul Revere’s historic ride from Boston to Lexington.

Those participating in the march called for the readjustment of the tax bracket to close corporate loopholes and budget cuts that spare certain government programs.

“We really wanted to bring progressive voices together to essentially restore common sense in Washington,” said Simon M. Thompson ‘14, the logistics coordinator for the march.

Roughly 40 people walked the full distance of the march, dressed in tricorn hats, blowing on vuvuzelas, and chanting “Fight back.”

“I’m so proud of all of you for marching these 13 miles and fighting for what’s right for America,” said Cambridge City Councillor Leland Cheung.

Samuel B. Novey ’11, a co-organizer of the event, spoke to an ideological divide between Democrats and Republicans and their respective views on how to approach trillions of dollars in federal budget deficits.

“We think that the top 10 percent have done very well and they’re not paying their share,” Novey said. “If you’re going to make cuts, don’t just make them on the backs of working-class Americans.”

After about 20 minutes, the march continued through Harvard Square and on to Boston.

The march culminated in a rally on the Paul Revere Mall and then proceeded on to Mass. Sen. John F. Kerry’s office.

The marchers asked Kerry to introduce the Fairness in Taxation Act, which would reduce the deficit by raising federal income tax rates on millionaires and billionaires, in the Senate.

Although Kerry’s staffers said that he would not introduce the bill, Novey concluded that the day’s efforts had still been successful.

“We showed our politicians that we’re not just going to accept talk anymore.” Novey said. “I think our message came across loud and clear.

Of the people passing through the park who had stopped to hear what the marchers had to say, several responded positively.

“They touched on a lot of things that I’m concerned about,” said David A. Whelan, a Cambridge resident and clinical instructor in psychology at Harvard Medical School. “I was glad that my two kids got to hear it.”