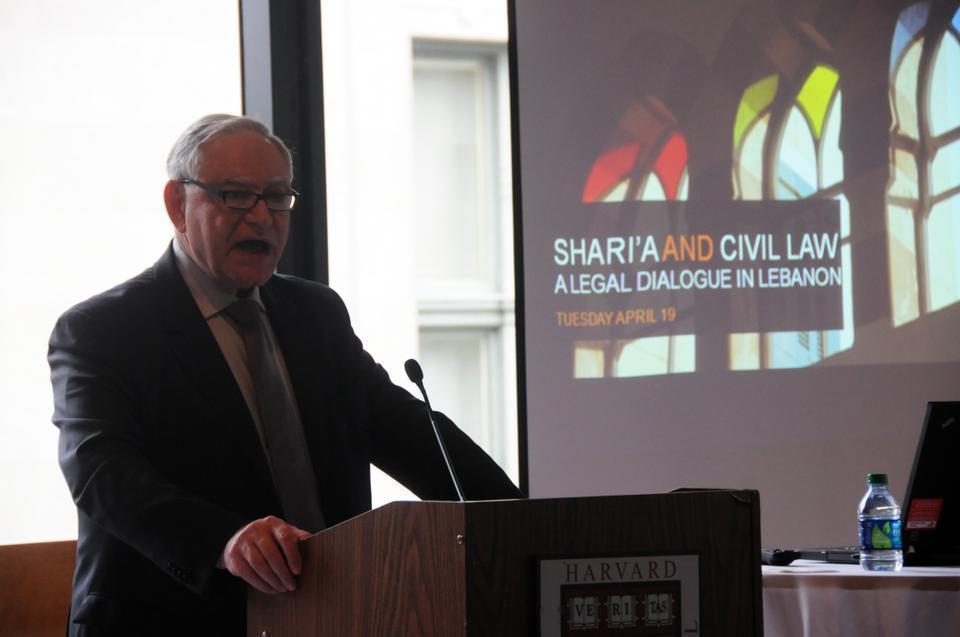 Dr. Ibrahim Najjar, the former Justice Minister of Lebanon and Professor of Law at St. Joseph University in Beirut, speaks about Shariah and civil law in Lebanon to students at Harvard Law School yesterday.
By Namrata Anand, Contributing Writer

Former Justice Minister of Lebanon Ibrahim Najjar said that the heavy influence of religious ideals in his country makes it difficult to craft secular laws that simultaneously satisfy both Muslims and Christians, in a lecture at Harvard Law School yesterday.

In his remarks, Najjar discussed the challenges and nuances of balancing Islamic Shariah law, Christian tenets, and civil law.

For example, Najjar cited his attempts to improve inheritance rights of illegitimate children during his time as justice minister.

Although he said he was eventually able to convince Islamic communities that the initiative was in the spirit of Shariah law, he continued to face opposition from Christian communities, which resulted in the failure of the legislation.

More than any other idea, however, Najjar stressed the necessity of cooperation and understanding between people of different religions.

In an interview, Najjar said he would support a secular government in Lebanon.

Although Najjar’s lecture focused on the situation in Lebanon and other Middle Eastern countries, he maintained that this discussion is a universally relevant one.

“This lecture was not specifically on Lebanon,” Najjar said. “In fact, the problems I have raised exist all over the world, in the very conflicted world we have today.”

George J. Somi, a graduate student at Harvard’s Center for Middle Eastern Studies (CMES), said he felt Najjar’s efforts to foster a growing secular community are “innovative and encouraging ... for people who want to seek an alternative direction to expressing themselves and living the lives they want to live.”

“To have somebody who is willing to see beyond this confrontation is definitely something that is needed in the region,” he said.

Najjar’s lecture was the sixth in the  Abd al-Razzaq al-Sanhuri Lecture Series on Legal Interpretation in the Muslim World, hosted by the Law School’s Islamic Legal Studies Program.