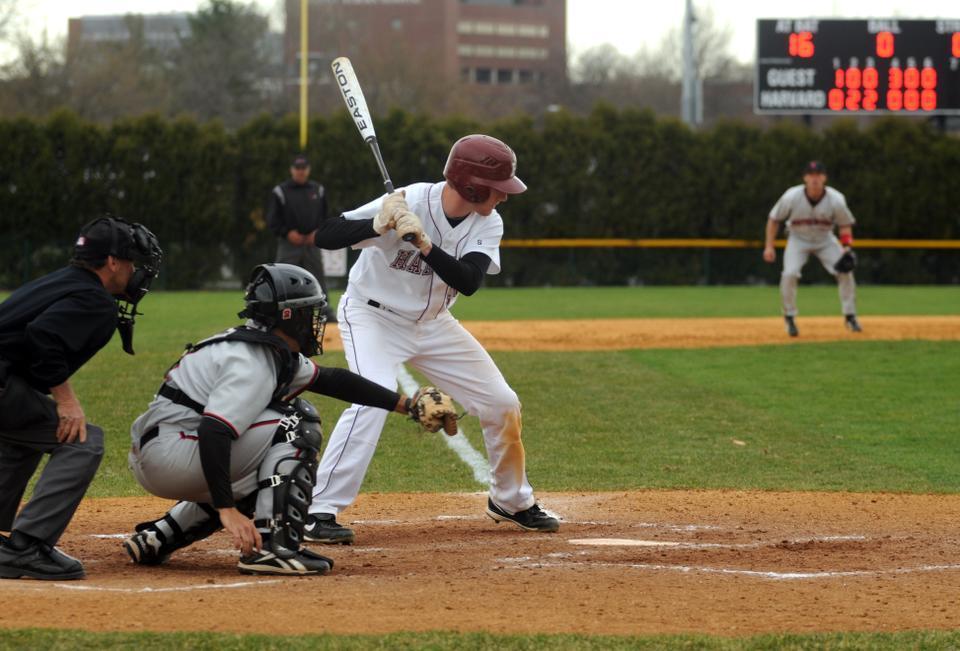 Freshman shortstop Jake McGuiggan, shown here in earlier action, whose play was one of the Crimson’s few bright spots yesterday, had two of the team’s three hits in the first matchup against Bryant. By Emily C. Wong
By Alexander Koenig, Contributing Writer

Weather forced Harvard and Bryant to reschedule their double-header earlier in the season, and on a rainy Tuesday afternoon it threatened to do so again. But despite the light drizzle and low temperatures, the Crimson (6-29, 3-9 Ivy) and Bulldogs (19-16, 9-7 Northeast) took to the field for a doubleheader, with Bryant taking both the early and late games, 3-2 and 12-2, respectively.

“It was a makeup date of a game, and we wanted to get some playing time,” Crimson coach Joe Walsh said. “Looking back now, if we could have had a chance to not play in this rain and scheduled it some other time, we definitely would have liked to do that. But you know, you play every chance you can get. It’s just the nature of New England baseball.”

Two monster innings by the Bulldogs and a host of throwing errors doomed the Crimson in the light-shortened second game of the afternoon doubleheader.  Bryant put five on the board in the top of the second and added seven more in the fourth to put the game out of reach. Harvard tried to respond to both scoring sprees, getting both of its runs in the bottom half of the same innings, but was unable to overcome the large deficit.

“We thought it would be a good chance for guys who couldn’t pitch this weekend to get their arms working in preparation for the Beanpot,” Walsh said. “Unfortunately, we couldn’t stick with them.”

The experience gained by the four pitchers who took to the mound for the Crimson was negated by four Bulldog runs off passed balls and wild pitches, including three in the second inning off starting pitcher sophomore Danny Moskovits.

Bryant put up 12 runs on just eight hits, thanks to four Crimson errors. Harvard was also aided by a Bulldog wild pitch as senior shortstop Sean O’Hara scored an unearned run in the fifth after having advanced on a fielder’s choice.

The Crimson scored its only other run of the game on a solo homer to center field by senior catcher Cole Arledge. It was his first on the season.

The game was called due to darkness after the conclusion of the sixth inning.

It took extra innings, but Bryant narrowly defeated Harvard on an RBI single by David Soltis in the top of the eighth. Strong relief pitching was the story for both teams, as Crimson sophomore pitcher Matt Doyle pitched five innings of one-hit baseball and Bulldog senior closer Mark Andrews pitched two and two-thirds innings of no-hit ball to finish the game.

“Matt Doyle did an outstanding job,” Walsh said. “That was the best effort that he’s ever had in a Crimson uniform. Five innings, one hit. He gave us a chance.”

That chance was taken away from them by Andrews, who struck out five of the eight men he faced. Andrews forced Harvard to leave five runners on base in the last three innings, when a run would have won the game.

“[Andrews] was filthy,” Walsh said. “He already has 10 saves this year. That great slider, four-seam fastball combination he has is dangerous.”

Despite Andrews’ prowess on the mound, the Crimson was certainly within striking distance of extending its win streak to three if not for a fielding error in the top of the eighth that set the stage for Soltis’ game-winning hit.

A hard line drive was misjudged by senior centerfielder Dillon O’Neill, sailing over his head and putting the winning runner–junior Connor Carignan–on second with Soltis coming up to bat.

“Dillon is one of our best defensive players,” Walsh said. “It’s a shame that ball got over him.”

The bad weather and Andrews’ continued excellence on the mound prevented Harvard from mounting a comeback in the final frame, as freshman pinch runner Jeff Hajdin reached second on a steal only to have the game end on a groundout to short.

“We had chances in that game and just didn’t execute,” Bailey said. “It’s too bad, but it happens.”

Andrews showed signs of tiring late, and it was unclear whether or not the Bryant senior would have returned to pitch in the ninth inning had it been necessary.

“I don’t know how long he would have been able to go,” Walsh said. “And who knows what would have happened if we didn’t fall behind in the eighth.”