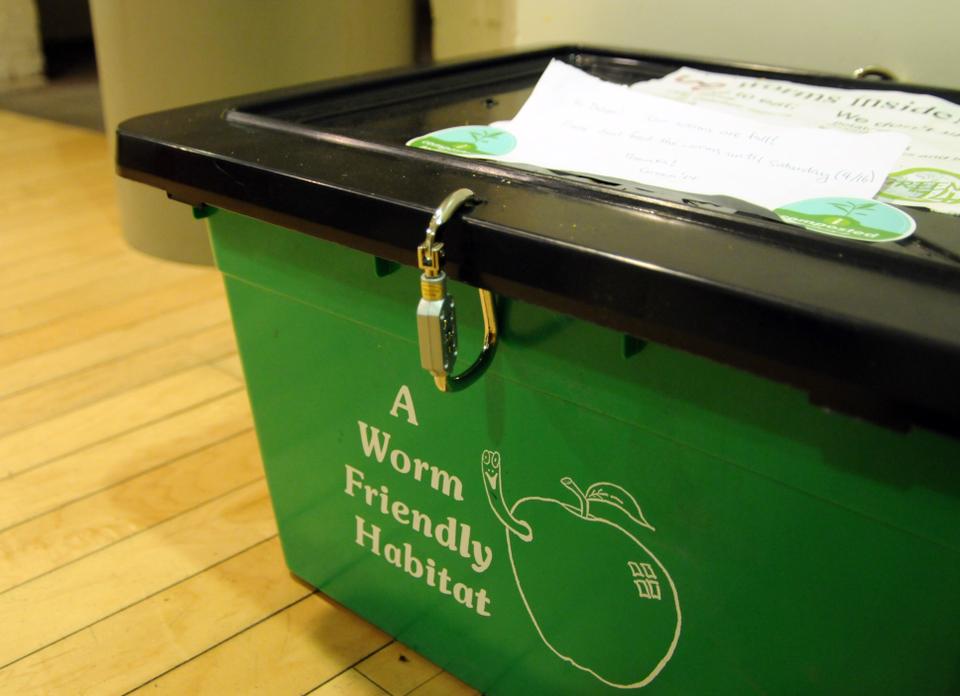 Thayer Hall houses this box of worms as a part of Bookworms Feed Real Worms, a project funded by the Student Sustainability Grant through the Office of Sustainability. This project aims to creatively reduce waste by involving Thayer residents in composting via vermiculture. Once the food is composted it will be used to enrich the soil in Harvard Garden.
By Melanie A. Guzman, Caroline M. McKay, and Benjamin M. Scuderi, Crimson Staff Writers

Librarians at the Harvard Law School Library now check out bicycles and helmets to Law School students. While cooking in Thayer Hall’s basement kitchen, College freshman can feed their leftover ingredients to a green box full of worms. If Harvard Medical School students need file folders or desk lamps, they can check out the Medical School’s “freecycling” room, a pseudo-Room-of-Requirement where one man’s trash becomes another’s treasure.

Since 2008, when the University’s sustainability efforts began in earnest, Harvard’s campus has changed in big and small ways to reduce carbon emissions, save energy, and decrease waste. In the midst of today’s Earth Day celebrations across the University, Harvard’s many schools are rolling out new programs and initiatives to continue to encourage a culture of sustainability.

The Law School will celebrate Earth Day today on the Harkness Patio with free food from local, sustainable vendors such as b.good and Veggie Planet.

On Monday, the School of Public Health’s sustainability team “EcoOpportunity” will organize a Bike Repair Clinic. The free clinic will teach attendees how to repair a flat tire, adjust a seat post, and provide a basic overview of bike parts.

“We’re trying to encourage and make it easier for people to take their bike to work,” School of Public Health Program Coordinator David J. Havelick said.

“EcoOpportunity” has also continued their annual “Take The Stairs” campaign, in which teams of five compete to climb the height of a mountain in flights of stairs.

On the same side of the Charles River, the Medical School hosted a “Lessons in Sustainability and Research” lecture featuring Director of Boston University’s Center for Energy & Environmental Studies Nathan Phillips.

As part of the sustainability initiative, the University announced yesterday that it will sponsor five bike share stations in Allston and Longwood as part of Hubway, Boston’s new regional Bike Share Program.

According to a press release, Harvard will also sponsor four bike share stations in the City of Cambridge when the program expands.

In another effort to reduce the environmental impact of the University, the Law School has installed lighting updates in Langdell Library and has added successful heat recovery units in Hauser Hall, according to the Law School’s Office for Sustainability Coordinator Kathryn A. Cosgrove.

“Designing green buildings is in [line with] the mission of the school,” said Daniel O. Beaudoin, a Leadership in Energy and Environmental Design accredited official and the manager of operations, energy, and utilities at the School of Public Health, which garnered this year’s Green Carpet award for the Green Building Project.

The graduate schools have been working to reduce greenhouse gas emissions since 2008, when University President Drew G. Faust announced an initiative to reduce emissions by 30 percent from 2006 baseline levels. According to the Office for Sustainability, Harvard as a whole has reduced greenhouse gas emissions by 7 percent from 2006 levels, but many of Harvard’s graduate schools are well ahead of projected progress.

The Faculty of Arts and Sciences has reduced greenhouse gas emissions by about 5 percent as of 2010.

According to Claire K. Berezowitz, the Longwood sustainability manager at the Office for Sustainability, the Medical School faces unique challenges in reducing emissions due to “the fact that we have so many energy and waste-intensive labs at HMS, as compared to other schools that are more exclusively classrooms and office space.”