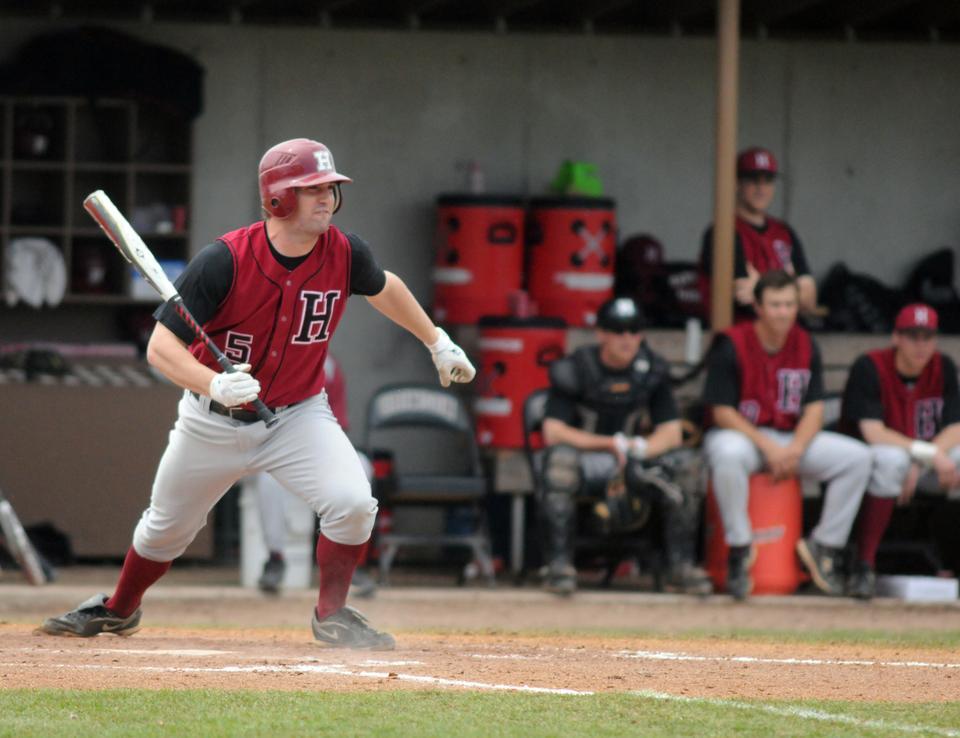 Senior shortstop Sean O’Hara went 3-for-3 at the plate with two RBI and a pair of walks yesterday against Yale, helping his squad earn its ninth win of the season in a 10-3 thumping of the Bulldogs. The Crimson will head to Fenway Park tomorrow to face Boston College in the Beanpot title game. By Emily C. Wong
By Catherine E. Coppinger, Crimson Staff Writer

After scoring just one run in two games against Yale on Friday, the Crimson’s offensive struggles continued in the third game of the series, as the Bulldogs (22-15, 10-6 Ivy) overpowered Harvard (9-31, 5-11) on the way to a commanding 8-1 victory yesterday afternoon. But Harvard came back to win the nightcap at O’Donnell Field for the second time this weekend, stunning Yale, 10-3, to earn its second win in four games against its rival.

“We started to bring some things together in that last game,” said senior pitcher Ben Sestanovich, who earned the win on the mound for Harvard. “We played some great defense and scored some runs. We pitched pretty decently and came out on top.”

In the top of the first, it looked like Yale might continue its dominant start to the day, as the Bulldogs earned the first run of the game.

But Harvard scored two in the bottom of the first, giving the Crimson a 2-1 lead it would not relinquish, with junior second baseman Jeff Reynolds and senior shortstop Sean O’Hara each notching an RBI.

“It was good to bounce back after a pretty pathetic first game,” Sestanovich said. “And it’s a lot better to go home on a victory than a loss.”

Senior centerfielder Dillon O’Neill led the team in scoring with three runs in yesterday’s nightcap, as hitting proved to be a key element to Harvard’s victory. Five Harvard players earned at least one RBI in the game, with Reynolds sending home three on two hits. Freshman third baseman Jake McGuiggan and O’Hara each contributed two RBI.

A highlight of the day came from McGuiggan, as the rookie slammed the ball beyond the right-field fence for a two-RBI home run in the fifth inning. The homer—McGuiggan’s first in his college career—opened up the game for the Crimson, pushing Harvard to a commanding 6-1 lead.

“McGuiggan’s home run really helped today,” Walsh said. “And it was good to see O’Hara, who’s been struggling at the plate, hit some line drives at the end there.”

In the sixth, Yale changed pitchers four times, as Bulldog pitchers sent co-captain Tyler Albright and sophomore first baseman Danny Moskovits home on a walk and a hit batsman, respectively, to put Harvard up, 8-1. A Yale fielding error allowed two more Harvard runs to score before the end of the inning, as the Crimson claimed a nine-run lead—its largest of the game.

“In the second game, we came out and, lo and behold, we swung the bats a little bit,” Walsh said. “But there was one inning there where we scored four runs without a hit. Even though we got 10 runs, [we couldn’t] really feel like the bats came alive.”

Yale scored two in the eighth, as senior infielder Trey Rallis hit one out of the park to bring the Bulldogs within seven. Luckily for the Crimson, no more Yale runs would score, as a short ninth inning ended on a double play.

Sestanovich—who recently underwent surgery for an elbow injury—had a strong night for Harvard, starting the game and striking out four batters in 5.1 innings.

“For me, the weekend was [all] Ben Sestanovich,” Walsh said. “You have to root for somebody like that. He went out there and had a really good outing.”

Harvard scored runs in double digits for the first time in seven games during yesterday’s nightcap.

“We’re hoping it’s contagious,” Walsh said. “We got a few hits and hope to carry that momentum into the week.”

In Sunday’s first game, Yale—which sits atop the Rolfe division in Ivy League standings—notched its second win against a Harvard team that has struggled for consistency so far this season.

Junior left-handed pitcher Brent Suter pitched the first four innings for the Crimson and struck out five batters, though he allowed seven runs scored in the first five innings.

“Suter’s been hot and cold for us all year,” Walsh said. “He didn’t have as good a fastball or breaking ball today [as he usually has] in the pen.”

Harvard went down by one in the second inning, but a Yale scoring surge in the fourth and fifth left the Crimson in an 8-1 hole.

“We have to learn to battle a little bit when we’re down early in the games,” Walsh said.

Harvard picked up its only run in the fourth, as Albright brought in junior designated hitter Marcus Way to bring Harvard within two of the Bulldogs, 3-1. Harvard earned just four hits in the loss.

With Harvard-Yale bragging rights on the line, this series has increased meaning for the Crimson.

"Everyone is familiar with the [Harvard-Yale] football rivalry,” McGuiggan said. “The baseball rivalry is just as big.”

“It was great that we were able to pull off the split,” Sestanovich added. “It would have been nice to win all four, but we’ll take it.”