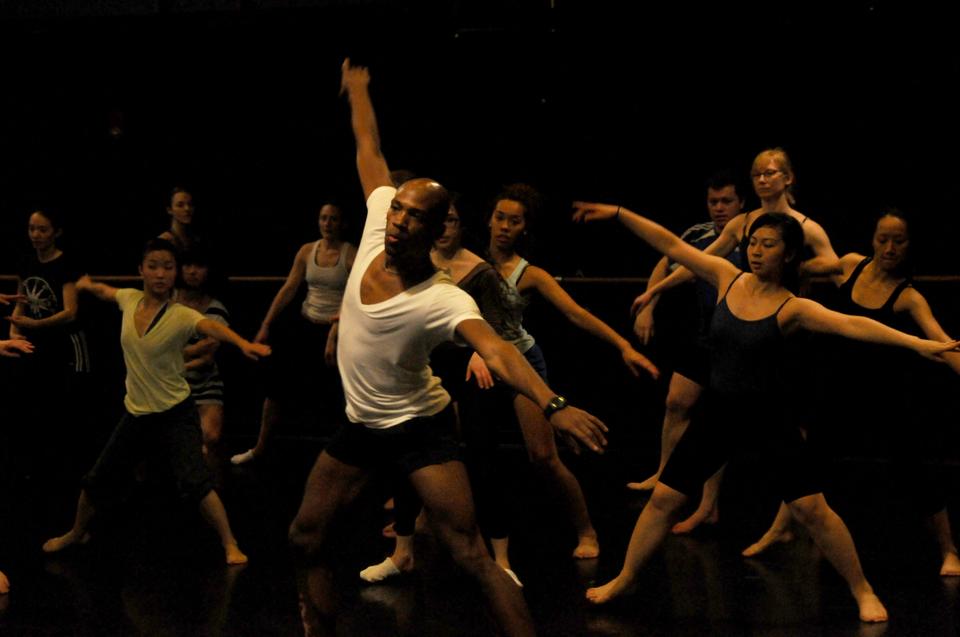 After leading a master class at the Harvard Dance Center this past Friday on the Alvin Ailey/Horton technique, dancer Antonio M. Douthit stretched out on the studio floor and gave workshop attendees a brief account of his first foray into dance.

“We should have been arrested,” laughed Douthit, a St. Louis native, as he recalled how he and two friends heard the sound of percussion through the window of a local dance studio, entered, and asked to participate in the class. The instructor allowed their group to dance that afternoon, and invited them to return the following day. Douthit came back repeatedly to dance and launched a brilliant career that brought him in 2004 to his current position as a company dancer of the Alvin Ailey American Dance Theater.

Douhtit’s visit to Harvard’s campus was coordinated by Stephanie L. Riven, a visiting practitioner at the Graduate School of Education and founder of the Center of Creative Arts (COCA), the St. Louis-based organization where Douthit completed his early dance training. There, he was enrolled in the pre-professional dance program, where he received mentorship and resources that allowed him to pursue jobs with several prominent companies including Dance Theatre of Harlem and Les Grands Ballets Canadiens de Montréal.

While his career has taken him all over the United States, Douthit remains very committed to outreach in his hometown. “Antonio comes to St. Louis each year to give back to the community, to teach young students who’ve had experiences similar to his,” said Riven. “He is a great mentor and very much admired in St. Louis for what he’s been able to achieve.”

When he has finished dancing professionally, Douthit plans to open a small community center in St. Louis that will provide quality dance education to young people growing up in a sometimes unpredictable urban environment.

On April 22, Douthit led assembled dancers from the Harvard community in a series of demanding combinations originating in the Horton technique. The Horton approach incorporates elements of many cultures’ native and folk traditions, and has strongly influenced the Ailey Company’s distinctive choreographic style.

Despite the challenging nature of the Horton-based exercises, Douthit stressed that his primary goal for students in the workshop was to have fun. “A lot of times when you do master classes, people have been training for a long time,” Douthit said. “You want to give out valuable information, but you want to let [students] have fun with what they’re doing, and not have them feel that it’s just another technique or strengthening class.”

A few of the dancers in the Friday class had also participated in previous Ailey intensives offered at Harvard, such as Dramatic Arts 123: “The Ailey Legacy,” and returned to revisit their experiences. “I think what the Horton and Ailey technique offers is ... a dance form that calls upon your physical reserves—calls upon muscularity, focus, [and] technique,” said Christine Bennett, assistant dance director at the OFA, who organized and also danced in the workshop. “[The Horton technique] is extremely codified and there’s a history there. If you’ve ever seen Alvin Ailey you know that the result is an exquisitely fine-tuned physical instrument ... This kind of technique is an inspiration for dancers.”

Douthit’s routines preserved the challenges inherent to his art form—the participants explored ways of moving that required them to isolate upper body from lower body, bend their torsoes from side to side, and work their laterals and core muscles.

Though the routines were undoubtedly rigorous, they were tackled by dancers of all levels who faced the more challenging exercises with a sense of humor buoyed by the supportive and lighthearted atmosphere. According to Bennett, this open, non-competitive environment is a great benefit of the Harvard dance program, and one that the staff hopes to continue fostering in the coming year. “Something to think about and something I hope to do is to add a few more classes on culturally based dance forms with no barrier to entry,” said Bennett. Even so, Douthit was impressed by the talent that he saw during the workshop. “Harvard rocks,” said Douthit. “No, seriously ... you would think because it’s such an academic school there would not be such a strong dance program, but I was taken aback by how strong some of the dancers were.”