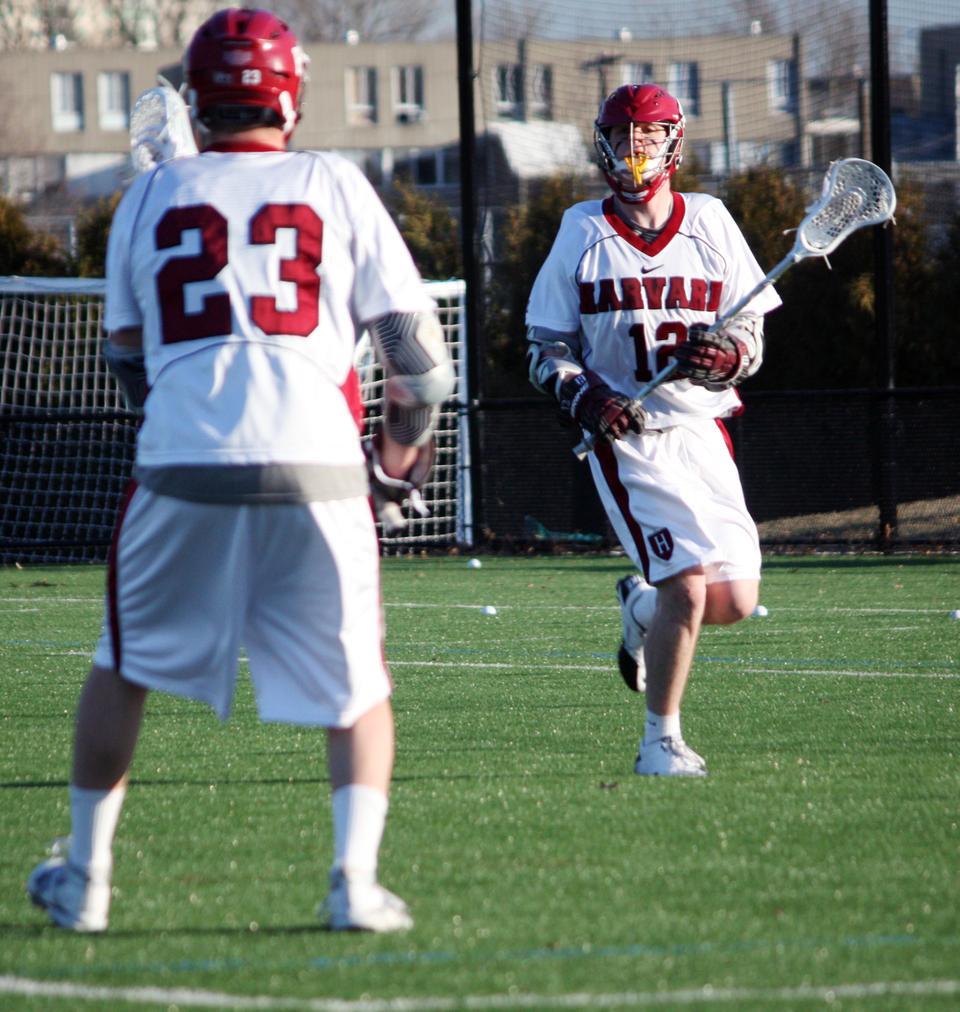 The team’s second-leading scorer, co-captain Dean Gibbons—shown here in earlier action—poured in three goals along with three assists to lead the Crimson over Princeton, 9-8, on the road Saturday afternoon. The crucial come-from-behind victory kept Harvard in contention for a berth in the Ivy League Tournament, to be held at Cornell May 6-8. By Danielle L Lussi
By Scott A. Sherman, Crimson Staff Writer

It was a story the Harvard men’s lacrosse team had witnessed before.

But the Tigers responded under a minute later, when Alex Capretta scored for a third time of his own to cut the Harvard lead to two. At 6:31, Luke Armour beat Crimson sophomore goaltender Harry Krieger, and all of a sudden, Harvard was only up by one.

For three straight Ivy League contests coming into Saturday, the Crimson had lost a late lead and fallen by one goal, finding a more heart-wrenching manner in which to do so each time.

Those losses meant that Saturday was a game the squad had to win if it wanted to maintain any chance of making the Ivy League Tournament in two weeks—and earning the continuation of its season that comes with it.

It was then that Harvard decided the show which had defined its conference season up to this point would not have a fourth episode.

This time, the defense stepped up, and Krieger made a big save on a shot by Princeton midfielder Tyler Moni with 59 seconds remaining to give Harvard a much-needed victory.

“It was an incredible win for us,” senior attackman Matt Hull said. “Both teams came out, gave it their all. It kind of had the feel of a playoff game; it had that electricity before it because both teams knew what was at stake.”

It was the Tigers who jumped out to a quick lead. At 9:06, senior Chris McBride tallied the contest’s first score, and Capretta beat Krieger twice in a 90-second span to put Princeton up, 3-0.

But Harvard came roaring back with six unanswered goals. Gibbons put the Crimson on the board at 3:56 by firing one past Tigers goalie Tyler Fiorito, and Hull cut the Princeton lead to one a minute later.

“As a senior, the meaning of the game was even more paramount to me,” Hull said. “I said, ‘I’m going to leave it on the line,’ and my [fellow] senior Dean Gibbons had sort of the same mindset. We got really pumped for this game, and we were really focused.”

Harvard then shut out the Tigers in the second quarter while recording four tallies of its own. Gibbons tied the game at 13:26, and junior Jeff Cohen added his team-leading 26th score to put the Crimson ahead, 4-3, with 6:43 to go in the period.

Hull added his second goal a minute later, then finished the hat trick by beating Fiorito off a pass from Gibbons with just 1.4 seconds remaining in the half.

“There was a soft spot in the center of their defense,” Hull said. “Some of their defenders were very good on-ball but tended to get lost off-ball ... It was partially the game plan [to attack those areas]. I saw those openings and gaps and took advantage of them.”

Coming out of the half down 6-3, the Tigers got on the board when McBride beat Krieger at 11:03. But Harvard would respond quickly again, as sophomore Jack Doyle scored at 10:22, and junior co-captain Kevin Vaughan added a goal at 7:49. Both tallies came off passes by Gibbons, giving the senior a team-high 25 assists.

The Tigers came back with scores by Armour and Mike Grossman before the period came to an end, cutting the Harvard lead to 8-6 heading into the fourth. But the Crimson would hold off the Tigers in the final period, and emerge with wins over its conference rival in back-to-back years for the first time since 1987-88.

“It feels great,” Gibbons said. “Before the win last year, we hadn’t beaten Princeton for over 20 years. Now we’re trying to start a streak of our own.”

Fiorito finished with 16 saves to Krieger’s 15. The teams took an equal amount of shots in each of the first two quarters, but Princeton went on the attack in the second half and out-shot Harvard 27-12.

“Harry played great yesterday,” Gibbons said. “One of his best games of the season. Considering the talent they have, its quite an accomplishment for him to have the game he did.”

The victory gives Harvard the ability to control its own destiny to reach the Ivy League Tournament. With a win over Yale next weekend, the Crimson will earn the third seed, and the ability to avoid No. 3 Cornell in the first round of the four-team event in Ithaca, N.Y.

The Crimson was in the same situation last year—facing a win-and-in situation against the Bulldogs in the season finale—but missed the tournament after falling by one goal. As with Saturday’s contest, Harvard is determined not to let history repeat itself.

“It’s a lot about our mindset,” Hull said. “If we go out there as play as hard as we can, play our brand of lacrosse—fast-paced, up-beat—if we can do that, we’re confident we can pull it out and get into the Ivy League Tournament.”