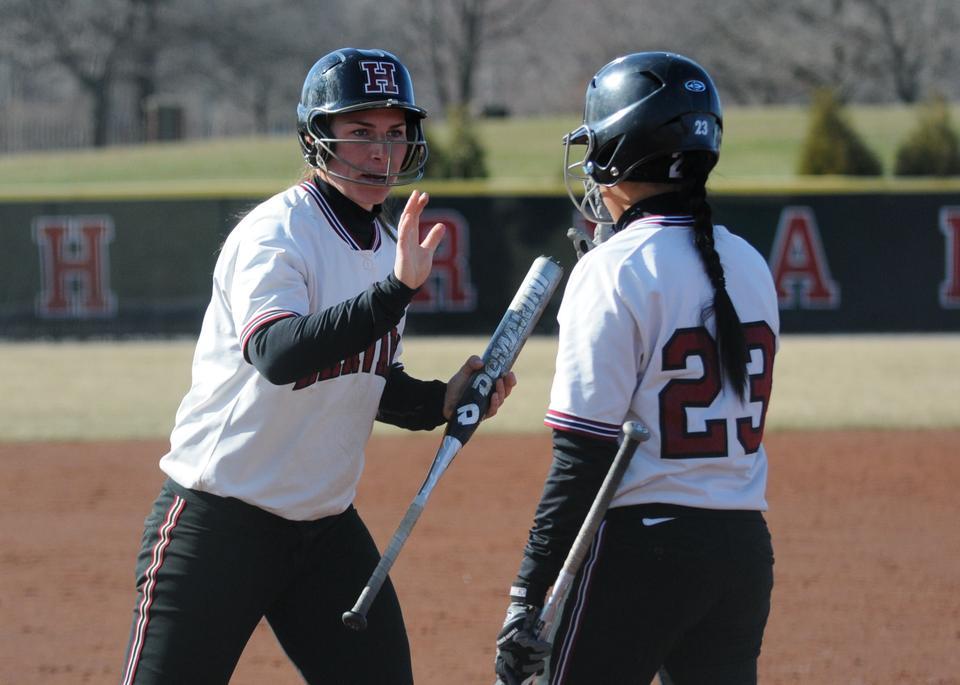 Junior first baseman Whitney Shaw, shown above in earlier action, hit a grand slam in the second game of yesterday’s doubleheader against Yale. With the bases loaded and no outs, Shaw faced the task of driving at least one runner home. Instead, the junior hit the ball out of the park, bringing in four scores and giving Harvard a lead it would not relinquish. By Meredith H. Keffer
By Dominic Martinez, Contributing Writer

Allard’s birthday wasn’t the only celebration going on at the field yesterday. Harvard’s two lone seniors and co-captains, infielder Ellen Macadam and outfielder Emily Henderson, were honored as part of the team’s annual Senior Day festivities. Allard was impressed with how the veteran duo performed against Yale.

“Both of our seniors played great today,” Allard said. “They showed great leadership out there. Ellen and [Emily] played great defensively and made some things happen on offense.”

In the second game of yesterday’s doubleheader, the Crimson got on the board early and never looked back.

Macadam got the ball rolling for Harvard with a base hit to center field to lead off the game. Sophomore Stephanie Regan reached on a Bulldog error, and freshman Kasey Lange was hit by a pitch to load the bases with no outs for the Crimson’s cleanup hitter, junior first baseman Whitney Shaw.

Shaw crushed a pitch from Yale’s Kristen Leung, sending it over the left-field wall for a grand slam.

“The bases were loaded, and I knew that it was important to attack them early on and keep the rally going,” Shaw said. “Everyone had done a great job of getting on base. I was trying to get a base hit—it happened to go out.”

Shaw and the high-powered Harvard offense gave the squad a lead, and the team’s pitching didn’t allow Yale to mount a comeback. Freshman Laura Ricciardone was on the mound for the Crimson, and pitched a solid five innings, giving up just one earned run.

After Ricciardone shut out the Bulldogs in the top of the second, Harvard went back to work offensively. Macadam hit her second single of the game to left field and stole a base to put herself in scoring position.

Regan brought the senior home with an RBI single to right field, pushing the Crimson lead to 5-0.

After Leung walked Lange and an error allowed freshman Allison Scott to reach first, the bases were once again loaded for Harvard. And when sophomore Ashley Heritage hit a two-RBI double to centerfield, Yale coach Barbara Reinalda decided that the day was over for her freshman hurler, bringing in sophomore Jackie Manzer to try to contain the streaking Crimson offense.

But the runs didn’t stop coming for Harvard. Manzer walked junior Mari Zumbro to load the bases for junior Jane Alexander. She hit an infield grounder, and the Bulldogs converted on a play at the plate, but Alexander reached on the fielder’s choice to keep the bases loaded with two outs.

Yale wasn’t out of the frame just yet—Harvard scored two more runs on a Macadam double before the third out.

Yale’s sole score of the twinbill came in the top of the fourth inning, when Christy Nelson homered to left-center field. Despite the one blemish of the day, members of the Harvard squad were happy with how they handled their Ivy opponent.

“Yale is good competition,” Shaw said. “In all three aspects of the game, we dominated. We outhit them, we outpitched them, and we played solid defense.”

The first contest of the doubleheader began as a pitcher’s duel between the Crimson’s Rachel Brown and the Bulldogs’ Chelsey Dunham. Unlike the second game in which Harvard had immediate offensive production, Dunham was able to stifle the Crimson for four full innings.

“[Dunham] did a good job of coming out and hitting her spots,” Allard said. “It took us a little while to get going offensively, but our defense kept us in it.”

On Easter Sunday, the Harvard offense finally rose up in the bottom of the fifth inning.

Heritage singled to right field and stole second, putting her in scoring position. She came home on a squeeze play, and shaky defense from Yale allowed Alexander to reach on the sacrifice bunt.

After Heritage’s run, the Crimson quickly opened up the game, scoring three runs in the fifth inning and five in the sixth.

“We made it happen—the squeeze was really clutch on Ashley and Jane’s part,” Shaw said. “It’s a part of our game, making little things happen out of nothing.”