Radcliffe Heavyweights Down Yale for First Time Since 2003 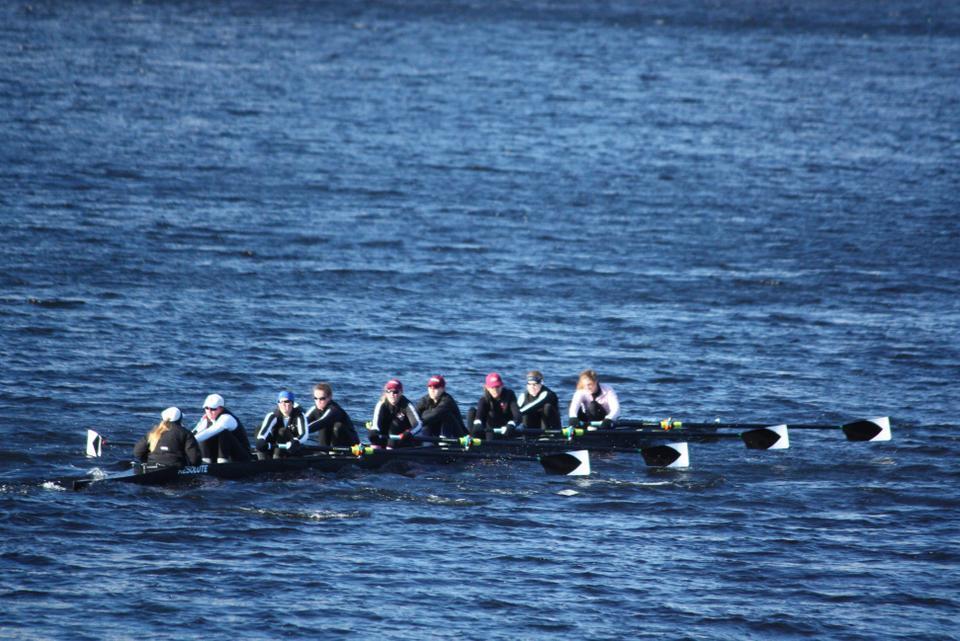 Shown here in earlier action, the Radcliffe heavyweight varsity eight finished three seconds ahead of defending NCAA varsity champion Yale Saturday morning on the Charles River, giving the Black and White its first defeat of the Bulldogs in eight years. Yale took first in each of the other three events. By Danielle L Lussi
By Oluwatoni A. Campbell, Crimson Staff Writer

Faced with choppy waters and gusty winds on a rainy morning, the Radcliffe lightweight and heavyweight crews took to the water to take on opponents both familiar and unfamiliar on the Charles River Saturday.

The lightweights squared off against Ivy foe Princeton and Bucknell in the Class of 1999 Cup, while the heavyweights rowed head to head against its historic rival Yale for the Case Cup.

NO. 4 RADCLIFFE LIGHTWEIGHTS VS. NO. 1 PRINCETON

Coming off a painful loss to Stanford last weekend, the Black and White lightweights were looking to regain momentum with victories over Princeton and Bucknell.

But Radcliffe’s expectations did not live up to its reality.

By the end of the competition on Saturday, the top-ranked Tigers (7-0) had bested the No. 4 Black and White, while the No. 6 Bison placed third in every race.

The first race of the day gave the Black and White an encouraging start to the day’s competition, as the Radcliffe second varsity eight powered past the Princeton 2V.

With the sound of the horn, the Black and White 2V came out strong and led Princeton by a comfortable margin at the halfway mark.

And in the second half of the race, the Black and White refused to relinquish its lead.

But the Black and White varsity crew would not be able to match the success of its 2V counterpart.

In the varsity race, the Tiger crew got off the line very quickly and led throughout the race.

Although Radcliffe was able to match the speed of Princeton, and by the last 500-meter mark, even looked poised to make a final surge towards victory, the final surge never materialized, and the Tigers were able to hold off the Black and White to finish with a time of 6:42.6.

The loss gave the Radcliffe lightweights their second defeat of the season.

NO. 16 RADCLIFFE HEAVYWEIGHTS VS. NO. 8 YALE

After eight long years on the losing end of the racecourse, the Black and White (7-4) heavyweights defeated No. 8 and defending NCAA varsity champion Yale (6-3), to take the Case Cup and bragging rights between the two rival schools.

“Winning the Case Cup in the varsity eight and being competitive in all our boats this weekend was a really huge turning point for our team this season,” senior heavyweight rower Tara Larson said.

In the 1V race, the Bulldogs exploded off the line first and maintained a slight lead for the first 1000 meters of the race. But during the third 500 meters, the Black and White was able to move in on Yale and even things up.

Heading into the final 500 meters, both crews set off on powerful sprints towards the finish line, but Radcliffe’s furious pace was too much for the Bulldogs, and the Black and White surged ahead to grab a three-second victory over Yale.

Despite the success of the Radcliffe 1V, other Black and White crews struggled against the Bulldogs.

The Yale second varsity eight edged out Radcliffe by six tenths of a second, while the Black and White 3V, 4V and Varsity Four were all bested by stronger Bulldog crews.

Nevertheless, these losses were unable to diminish the victory of the Radcliffe 1V over Yale, as the Black and White celebrated their first Case Cup victory since 2003.

Radcliffe hopes to build off of this success in the remaining races of the season.

“The biggest influence that this weekend will have on the rest of our season is just the huge confidence booster this win against Yale has given us,” sophomore heavyweight rower Celia Kohl said. “Obviously we’ve had some ups and downs this season, but as a whole, we’ve always known that we had a fast boat but it’s taken some steps to get there.”

“Our team is really fired up because now we know for certain that the podium at the sprints championship is totally within our reach,” Larson said.