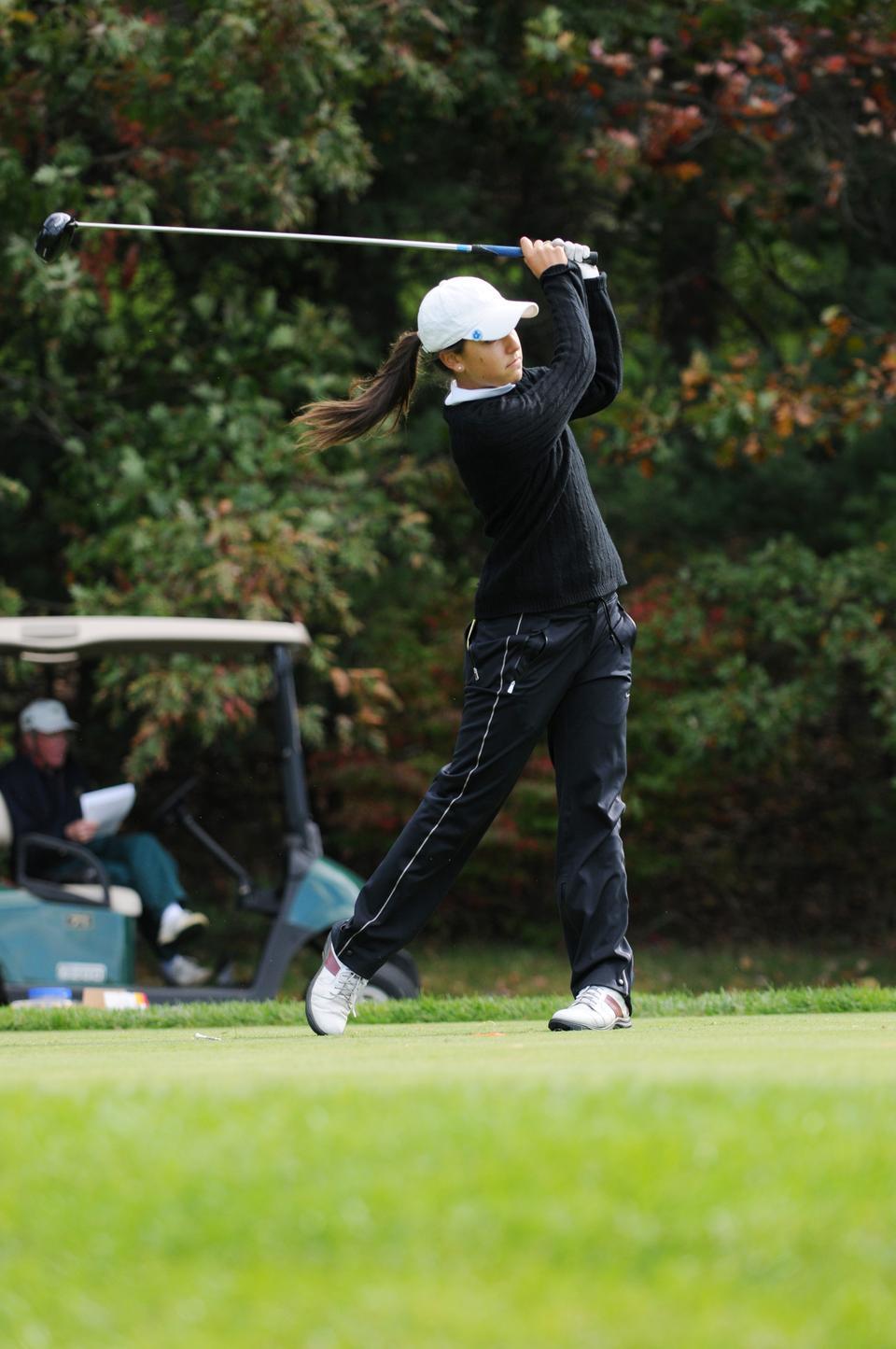 Captain Mia Kabasakalis, shown above in earlier play, was the Crimson’s top performer at this weekend’s Ivy League Championships. The senior finished +8 over three rounds to end up in second place in the individual standings. Yale beat out Harvard for the top spot in the competition by four strokes. By Meredith H. Keffer
By Robert S Samuels, Crimson Staff Writer

After struggling in its first spring tournament, the Harvard women’s golf team found its stride in the Spring Brown Bear Invitational two weeks ago, finishing second in a field of 12 teams.

In this weekend’s Ivy League Championships, the Crimson proved that performance wasn’t a fluke.

Harvard finished second overall, shooting a +53 at the three-day tournament at the Atlantic City Country Club in Northfield, N.J. Captain Mia Kabasakalis led the way for the Crimson, finishing second individually in a field of 35.

Yale took first place, finishing four strokes ahead of Harvard on the par-72 course with +49.

“You’re always disappointed when you come up a little bit short of what your goal is,” Harvard coach Kevin Rhoads said. “[Coming in], I thought four teams could’ve won this week…It was going to come down to who prepared the best, and then who just executed the best for three days.”

“And we almost did that,” Rhoads continued. “Almost.”

The first half of the first round couldn’t have gone much better for the Crimson. After nine holes, captain Mia Kabasakalis and junior Christine Cho were +1, and the team’s four top scorers were just a combined +7.

“In the first nine holes, we were in a really, really good place,” Rhoads said.

But then Harvard began to slip. Rookie Bonnie Hu had consecutive double bogies on the 13th and the 14th, Chu had four running bogies, and Reuter was +5 on the final six holes. The Crimson still finished with a respectable +25, just three strokes behind the Bulldogs for the best score of the day.

But Harvard’s weak finish on day one had lasting consequences.

“The difference in the tournament was not what happened [Sunday] or what happened [Saturday] but really [what happened] the second half of the first round,” Rhoads said. “We let a very good round turn into a good round, and in the end, it’s only a couple shots that separates the top couple teams.”

A part of Harvard’s problem on Friday afternoon was the rough weather conditions. The course was both cold and windy, leading to quite high scores. In fact, the seven teams averaged 20 strokes less on Sunday than they did on Friday.

“It was really cold and really windy,” Kabasakalis said. “Pin placements were tough, and the wind was really drying up the greens. They were really slick.”

The weather let up slightly the next day, though scores remained high. The Crimson dropped four strokes from its performance on Friday, but Penn had a stronger showing to move into second place. Yale retained the lead.

While Kabasakalis had the low score again for the Harvard on the second day, finishing +4, Hu, usually Harvard’s most reliable player, continued to struggle on the scorecard. Prior to the tournament, Hu averaged just 3.24 strokes over-par each round. On Friday and Saturday, the freshman finished +8 and +7, respectively.

“The first round, she’d hit putts that would go right over the edge, and I’d say, ‘Just keep on hitting putts like that, and they will fall,’” Rhoads said. “And they didn’t fall at all in the first round. [In] the second, she started doing the same thing.”

But for Hu and the rest of the Crimson, everything clicked on Sunday.

Aided in part by the easier weather, Harvard dropped a full 14 strokes from its Saturday total. Kabasakalis and Hu tied for the low score on the team, as both players finished +1.

Hu had one of the best rounds of the year going, as she was -3 after 14 holes. But a triple bogey on the par-3 15th put the freshman back at even par, and she finished the day +1.

“Bonnie killed it today,” Kabasakalis said. “She struggled a little bit the first two days, but she came back in a big way today.”

Over the three days, Hu finished tied for 12th.

Kabasakalis’ +1 on Sunday gave her sole possession of second place individually. Though she averaged 6.53 strokes above-par during the season’s earlier matches, the senior finished +8 over the three rounds of the Ivy League Championship.

The rest of the team had strong finishes as well. Cho shot a 74 and finished in 10th place overall with a three-day total of +14. Junior Jane Lee finished with a 75 on Sunday, and freshman Fritzi Reuter came in with a team-high 78.

But the strong effort on Sunday wasn’t quite enough. The Bulldogs shot just +5 on the tournament’s final day, giving the team a four-stroke victory over the Crimson.

For Harvard, coming so close to victory made the second-place finish sting that much more.

“Yale played really well when they needed to today,” Rhoads said. “We got beat, which is better than beating yourselves, but it’s hard to come up only a couple shots short at the end of a long season.”