EYES ON THE PRIZE

After falling behind by three scores in the second half, the Crimson responded with nine unanswered goals to set up a clash with Dartmouth for a share of the Ivy title next week 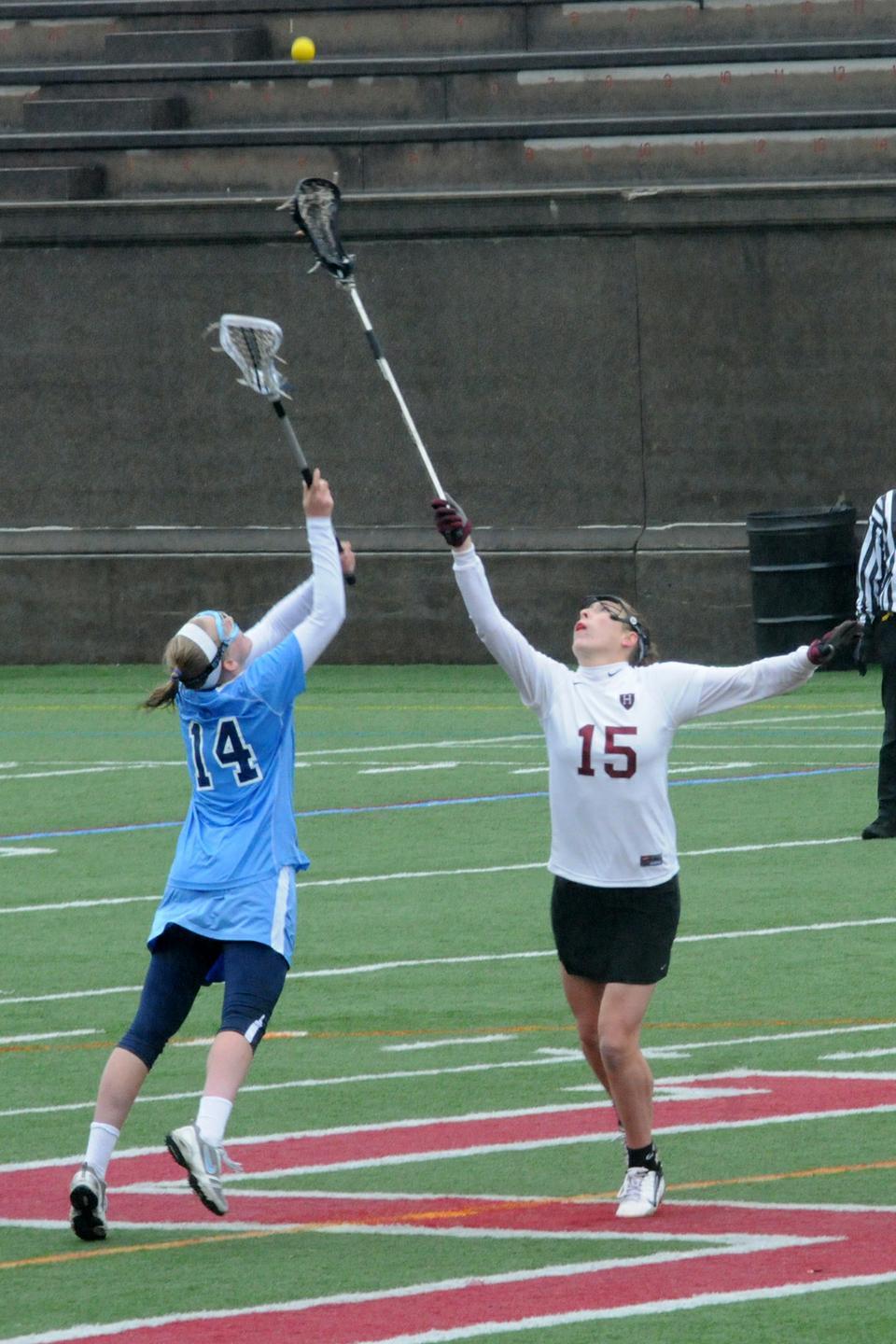 But just when it seemed as if Columbia (4-9, 1-5 Ivy) was poised to spoil the Crimson’s (9-4, 5-1 Ivy) chance of earning a share of the Ivy League title, sophomore Danielle Tetreault’s free position goal sparked an impressive 9-0 run for the home team, which would go on to win, 15-9.

“It’s just a game of momentum,” said junior tri-captain Melanie Baskind, who notched the go-ahead score for the Crimson off a free-position shot with 13:44 to play. “It’s just feeding off of each other’s energy.”

In the early going, it was the Lions who had the energy.

Columbia freshman Paige Cuscovitch scored the first two goals of the game, giving the visitors an early 2-0 lead. The Crimson and Lions traded the next four goals, putting Columbia ahead, 4-2, with 19:40 remaining in the first half.

Harvard and the Lions went on to play 15 minutes without scoring, with the Crimson missing plenty of opportunities—partly due to some big saves by Columbia junior goalie Karlee Blanke, who had 10 stops on the day.

The Lions finally scored with 4:01 left in the first half, giving Columbia its largest lead of the game.

But Harvard went on a short run to end the half. With 1:48 remaining, Harvard junior Jess Halpern faked out her defender and scored to cut the Crimson’s deficit to two.

With the clock winding down in the first half, the Crimson missed a desperation shot, but Baskind was able to bat the loose ball into the net with three seconds remaining, cutting the Lion’s lead to one going into halftime.

“We were running our motion, and we weren’t clearing space for each other,” Crimson coach Lisa Miller said. “When we play against a packed-in defense, or a shell defense ... sometimes we just don’t give each other enough room, and our timing’s a little bit off, so we struggle to score against that.”

“I think we’re best when we move off ball, and we don’t get complacent,” Baskind added. “I think we just got to sharpen up and focus a little bit better next time.”

Harvard continued to struggle scoring the ball in the start of the second half.

Just 43 seconds into the frame, Johnson put the visitors back up by two, and the Crimson struggled at getting shots off of its free-position attempts.

But Baskind scored with 25:39 remaining to cut the deficit back to one. The Lions then went on to score the next two goals, giving Columbia an 8-5 lead with 23:29 left in the game.

But Harvard drew upon past experiences and did not panic.

“I think one of the beauties of playing a tough schedule is that you get used to playing in every different type of situation,” Baskind said. “I think we’ve been there before.”

The scoring surge continued for the Crimson.

Less than a minute later, Baskind scored off a free-position shot to give Harvard its first lead of the game, and VanderMeulen scored the next two to put the Crimson up by three.

“We started to win the draw controls,” Miller said. “Draw controls in this game are everything.”

Three more goals by Halpern, Tetreault and VanderMeulen put Harvard up, 14-8, with 5:13 remaining, and helped seal the come-from-behind victory for the Crimson.

“We started to run some set pieces,” Miller said. “Then we can go back to our motion after we run that ... We’ll find a way to score one way or another.”

VanderMeulen led Harvard with five goals on the day, four of which came during the Crimson’s 9-0 run in the second half.

“She’s a goal scorer,” Miller said. “Goal scorers need to score or they get tight ... I think as soon as the first one fell, you could see her kind of loosen up a little bit.”

Halpern, Baskind and Tetreault each finished the day with three goals, while sophomore Nina Kucharczyk scored one.

Junior goalie Kerry Clark had five saves on the afternoon.

With Saturday’s win, Harvard can now clinch a share of the Ivy League title with a win at Dartmouth on Friday night.

“I think anyone who was watching it would say it was ugly, and it was,” Baskind said. “What’s important is that it’s another Ivy League win for us.”