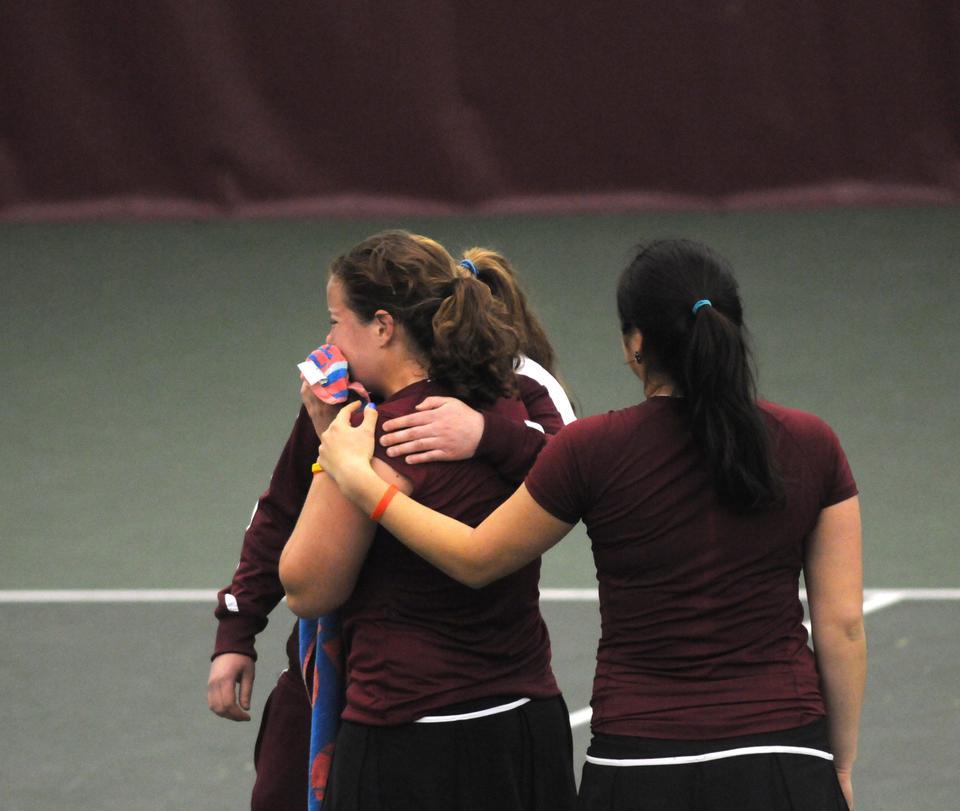 It all came down to freshman Hannah Morrill’s matchup with the Big Green’s Georgiana Smyser to determine the winner of the matchup and also potentially clinch a share of the Ivy League title. Morrill won the first set before Smyser challenged the rookie and took the second one, 6-3. Morrill was up early in the third set but ultimately dropped the matchup, 6-3. By Martin C. Ye
By Stephanie E. Herwatt, Crimson Staff Writer

Going into the last weekend of Ivy play, two things needed to happen for the No. 55 Harvard women’s tennis team to earn a five-way share of the Ivy League title: a win over No. 56 Dartmouth, and No. 50 Brown to defeat No. 34 Yale.

“It was a very exciting match that came down to the very last match in singles,” Harvard coach Traci Green said. “My hat goes out to Dartmouth for the way they competed and the way they played.”

The Crimson started off strong, claiming the doubles point with victories on the No. 1 and No. 2 courts.

The top pair of sophomores Hideko Tachibana and Kristin Norton finished first, toppling their opponents, 8-2, to give Harvard the edge in doubles play.

The No. 2 duo of junior co-captain Holly Cao and freshman Hannah Morrill followed, defeating Big Green seniors Ryan Reichel and Sabrina Stewart, 8-5, to secure the doubles point for the Crimson.

“The doubles point is the first point of the match, so it’s crucial that we get off to a good start,” Cao said. “But in the end, it’s only one point of the seven, so you still have to perform well in singles.”

But the Big Green took back the momentum to tie up the match, 2-2, as both Blosser and junior Samantha Gridley fell in straight sets to Reichel and sophomore Christina Danosi on the No. 4 and No. 6 courts, respectively.

Tachibana regained Harvard’s edge with a victory at the No. 2 spot against Dartmouth sophomore Sarah Leonard, posting a scores of 6-3, 6-2.

But with two matches still to play, it was anybody’s game.

On the No. 3 court, the Big Green stayed alive as freshman Melissa Matsuoka defeated Norton in a close match, 6-4, 6-4.

Morrill took the lead, winning the first set, 6-3, but Dartmouth senior Georgiana Smyser fought back to claim the second set, 6-3.

Both teams’ chance at the Ivy title would come down to the third and final set.

Morrill grabbed an early lead, up 2-1, but Smsyer regained momentum to take the final set, 6-3, to clinch the victory and a share of the title for her squad.

“As a freshman, Hannah has improved so much this season,” Cao said. “Even though she lost, she did a really great job and kept her composure, and we are proud of her.”

With the Bulldogs downing the Bears, 4-3, Yale and the Big Green tied for the top spot in the league. The Bulldog win also signified that the Crimson had no chance of sharing the title.

“Every single team in the Ivy League has been playing well,” Green said. “It speaks volumes about the league how there are so many ranked teams now, and any team can win on any given day. Overall, we have made a lot of progress internally this season…We are going to take every single win and every single loss and learn from it.”

“In singles, there were a lot of close matches that could have gone either way,” Cao said. “But when it came to the big points, Dartmouth did slightly better than us, and that’s what made the difference today. Overall though, as a team, we’ve done a better job of supporting each other and have made a lot of big strides throughout the season. We’ve done a good job and have a lot to be proud of.”

—Staff writer Stephanie E. Herwatt can be reached at sherwatt@college.harvard.edu.