Students line up for free gear in exchange for participation 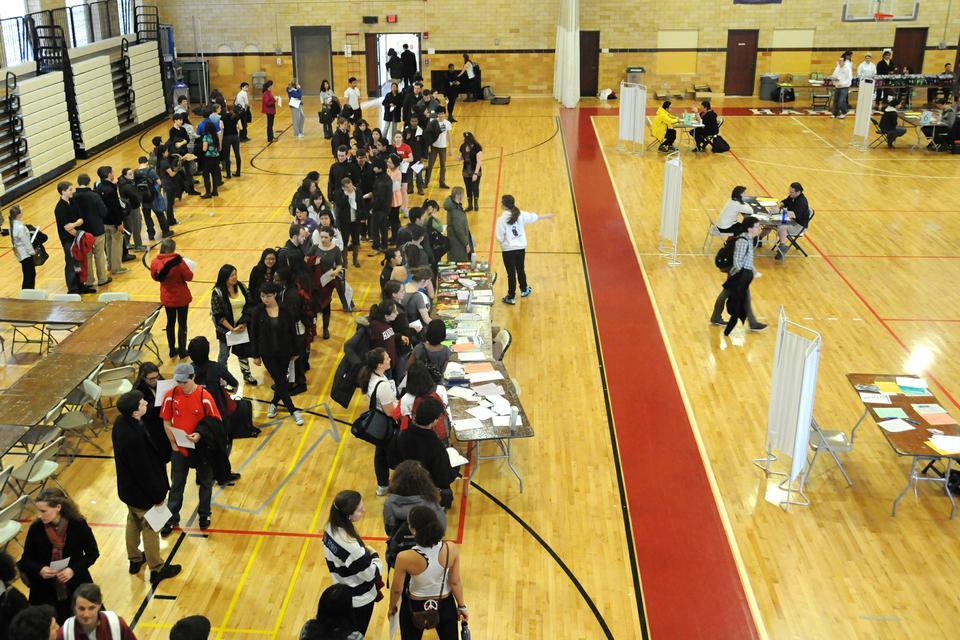 Hundreds of students wait in line to participate in the National Alcohol Screening Day hosted at the Malkin Athletic Center and to receive their free DAPA CamelBak water bottle
By Taryn I. Kurcz, Contributing Writer

Drug & Alcohol Peer Advisors water bottles have taken the campus by storm thanks to the National Alcohol Screening Day that took place on Friday.

The event, organized by DAPA, aimed to raise awareness about alcohol consumption on campus.

In order to receive a water bottle, students filled out a questionnaire about their alcohol use and then met with a consultant about their responses.

The conversations were conducted in private, and the results of the survey were anonymous.

After speaking with the consultants about safe alcohol consumption for a few minutes, participants received a DAPA CamelBak water bottle.

“The water bottles are obviously a huge draw,” said Ryan Travia, director of alcohol & other drug services for Harvard University Health Services. “But in my mind it’s about whatever works just to get students in the door.”

Getting students in the door is exactly what happened.

Travia estimated that between 1,500 and 1,600 people filed through the fourth floor of the Malkin Athletic Center.

Student turnout was so high that DAPA ran out of water bottles a full hour before the end of the event.

“We had high expectations coming in [this year], and I think we exceeded those expectations,” said Chair of DAPA’s Events Committee Daniel E. Minamide ’12.

Although the national screening day is about advocating responsible drinking, many of the students who attend the event are either non-drinkers or low-risk drinkers, Travia said.

Sometimes these students are simply lured in by the free water bottles, but students can use the opportunity to get advice about a friend or family member who has problems with alcohol, Travia said.

The consultants give tips and strategies of how to handle situations, and they make students aware of resources available.

This increase in alcohol awareness, Travia said, helps explain the increases in the number of students admitted to UHS for alcohol consumption this year.

Harvard’s amnesty policy also seems to correlate with the rise in UHS visits. The amnesty policy allows students to take intoxicated friends to UHS without facing disciplinary repercussions from the College.

“I think, if anything, [the increased UHS visits] is not a negative,” Minamide said. “That’s people being more aware around campus of what they can do and of what they should be looking for when people are out drinking.”