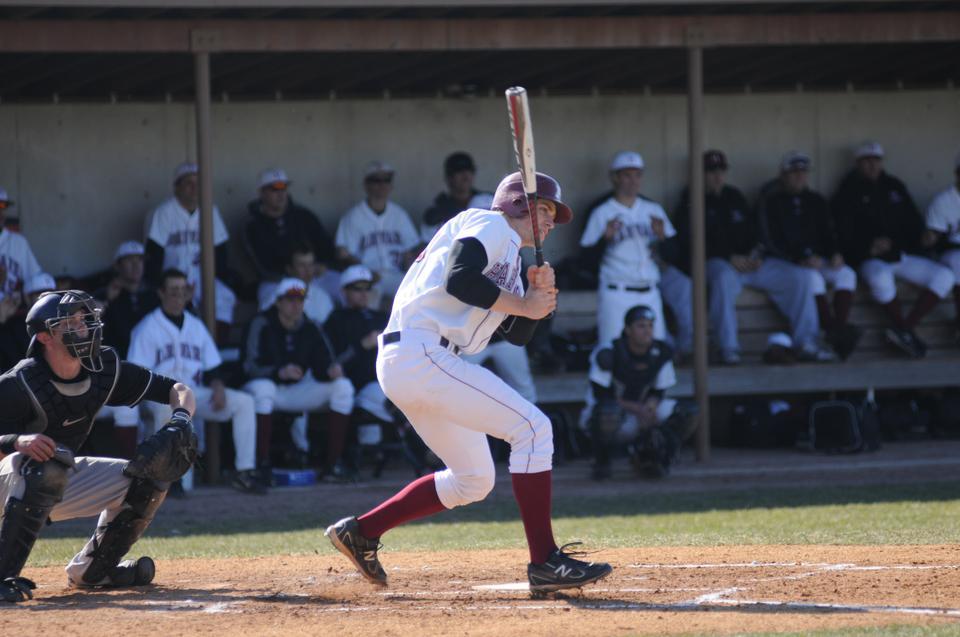 Junior Marcus Way, shown above in previous play, had an RBI double in the first game of yesterday’s doubleheader against Columbia. The Crimson has lost its past six games and is without a win in its conference.
By Max N. Brondfield, Crimson Staff Writer

NEW YORK, N.Y.—The Crimson baseball team hoped that the beginning of Ivy League play would present a fresh start. Unfortunately for Harvard, a weekend trip to New York did little to end its struggles.

The Crimson (3-19, 0-4 Ivy) dropped all four of its road contests against Penn and Columbia, losing a doubleheader to the Quakers in Philadelphia on Saturday before falling short in a pair of games against the Lions yesterday.

Harvard made it a habit this weekend of turning things around late, but the visitors’ rallies never proved to be enough. The Crimson opened the weekend with a lopsided 8-1 defeat against Penn before storming back in the nightcap. The squad could not hold its lead and fell in 12 innings, 8-7. Harvard couldn’t muster the same level of offense against Columbia, posting 11-2 and 8-0 defeats over the day.

“We get guys on base a lot, we’ve just got to score them,” captain Tyler Albright said. “Hitting is contagious for us, so we’ve just got to get our leadoff guys on, and I think the rest of the guys will come through.”

Unfortunately for the Crimson, it never could find a rhythm against Olson or reliever Harrison Slutsky, failing to reach base at all from the fourth through seventh innings. The Lions, on the other hand, plated four additional runs in the seventh, pushing the lead to 8-0 en route to a two-game sweep.

A sluggish start hurt the Crimson on Sunday morning, as junior Brent Suter yielded five runs in the bottom of the first before senior Dan Berardo came on to relieve. Lions pitcher Dan Bracey had an easier time, relying on solid defense behind him. Sophomore Danny Moskovits earned Harvard’s first hit of the day with two outs in the third, lacing a double to left-center field that rolled all the way to the wall. Senior Dillon O’Neill then worked a full count before looping a line drive the opposite way in right center. But center field Nick Cox—who was four-for-four at the plate in the nightcap—made a nice break on the ball from center field and came up with a diving catch to save a run.

“Defense was solid today,” Albright said. “Columbia made some really nice plays in the field, and so did we.”

With the Columbia defense committing just one error all day, the Lions’ offense kept the pressure on.

Designated hitter Dario Pizzano belted a three-run home run in bottom of the fifth for an 8-0 lead, and the home team would push it to 10-0 before Harvard struck. The visitors notched a pair of runs in the top of the sixth on RBI doubles from juniors Jeff Reynolds and Marcus Way, but the Crimson could not close the gap. Columbia closed out the seven-inning contest, 11-2, for its first Ivy win.

The nightcap between the Quakers (12-10, 4-0) and the Crimson highlighted the importance of key defensive stops, as three Harvard errors resulted in eight unearned runs for Penn. The Crimson erased any bitter taste left from the morning loss with a three-run outburst in the top of the first, capped by a two-RBI single from O’Hara. But Penn took advantage of the shortstop’s throwing error in the bottom half for six unearned runs against senior starter Max Perlman.

Perlman would not allow another run until the sixth inning, as Harvard fought back yet again. The Crimson plated a run in the third and two in the fourth—including a steal of home by O’Neill—before Way belted a solo homerun in the fifth to give the visitors a 7-6 lead.

But Penn would scratch out another unearned run in the bottom of the sixth, this time resulting from a Perlman throwing error. The senior ace finished the day with four strikeouts in seven innings and a no-decision.

Despite six errors from the Quakers, Harvard could not muster any more runs of its own, as the bats on both sides went quiet until the 12th. Senior Ben Sestanovich came on in relief after four scoreless innings from junior Will Keuper and fell victim to another throwing error. After allowing a leadoff single, Sestanovich attempted to field a sacrifice bunt only to hit the runner in the back with his throw, allowing Dan Williams to advance to third. The Crimson intentionally loaded the bases to face Spencer Branigan, but the designated hitter lofted a fly ball deep enough to score Williams, sending Harvard to an 0-2 start in Ivy play.

The first Ancient Eight game of the season featured much less drama. Senior Eric Eadington and Penn hurler Paul Cusick were locked in a pitching duel through two innings, before Harvard broke through in the top of the third. Albright reached base on a fielding error, and a sacrifice bunt and O’Neill single moved the captain to third. Franklin’s groundout proved enough to plate Albright and stake the Crimson to a 1-0 lead.

But Penn would fire right back, as Rick Brebner belted a homerun to right to tie the game. From there, luck seemed to swing toward the Quakers. A pair of infield singles and errors set Penn up for three more runs in the frame—a lead Harvard could not make up. The Quakers would add three runs in the fifth and one in the sixth, plenty of offense behind Cusick’s complete-game, 12-strikeout performance.

“It was a difficult weekend, but it’s the Ivy League—we’ve got 16 more games and anything could happen,” Albright said.