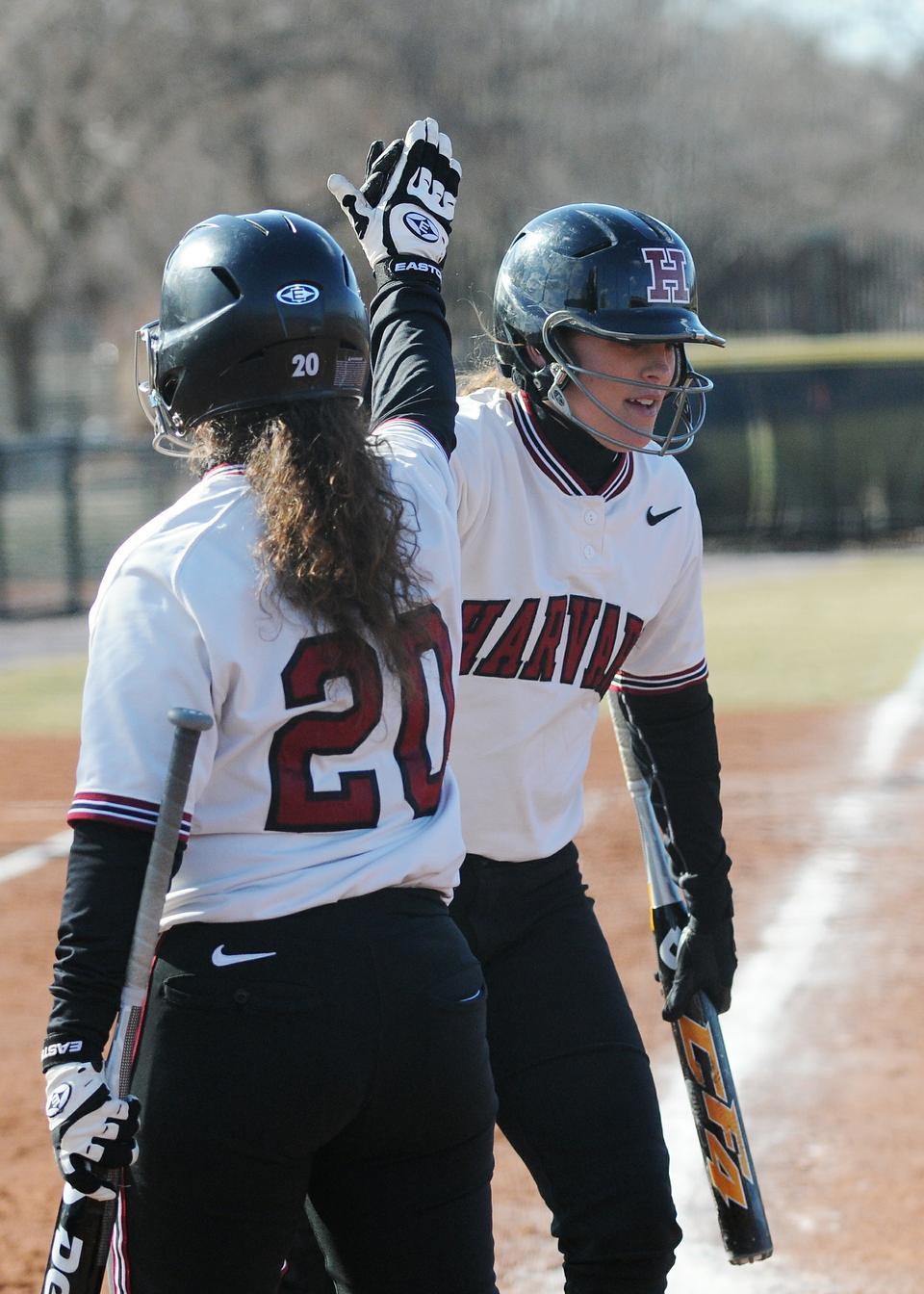 The Harvard softball team may be five weeks deep into its schedule, but the real season has just begun.

The Crimson (18-10, 4-0 Ivy) opened conference play on the road this weekend and didn’t waste any time asserting itself as the favorite to defend its Ivy League North title.

The Crimson recorded 2-1 and 10-0 victories over the Quakers on Saturday before turning in matching 4-2 wins over the Lions yesterday.

“It was a great weekend to open the Ivies,” junior Whitney Shaw said. “We just did a great job of sticking with the other teams and working inning to inning and making sure we came up with the results.”

In its weekend finale, Macadam made sure Harvard got off on the right foot, putting the second pitch of the game over the left-field fence en route to a 4-2 Crimson win.

“Ellen’s a veteran, and she came out really poised and came out really focused,” Harvard coach Jenny Allard said. “She battled every at-bat—I thought she was one of our toughest outs all weekend.”

Macadam’s solo shot gave the Crimson an early 1-0 lead, an advantage that the squad doubled in the fourth. Lange led off the inning with a double and came around to score on freshman Alison Scott’s double to left center.

Lange then made the lead 4-0 in the top of the fifth, driving in Macadam and co-captain Emily Henderson with a single to right.

Ricciardone held Columbia scoreless until the seventh but couldn’t quite hold on for her second shutout of the weekend.

Alison Lam scored the Lions’ first run on a fielding error, and Jennifer Bergeron drove in a second run with a single. But that was as close as Columbia got, as Ricciardone got Karen Tulig to hit into a fielder’s choice to end the game.

In yesterday’s opener, Lange’s third-inning grand slam provided all the offense the Crimson and pitcher Brown would need in a 4-2 win at CU Softball Stadium.

“Kasey was on fire at Columbia,” Shaw said. “She did absolutely great. She just focused in and really picked us up offensively.”

The Lions jumped out to a 1-0 lead in the bottom of the first on Anne Marie Skylis’s RBI single, but Brown kept Columbia quiet until the seventh, when Christie Taylor led off with a home run down the left-field line.

Brown sat down the next three Lions in order to finish off her second consecutive 11-strikeout complete game.

“Columbia came out and was pretty aggressive,” Allard said. “But [Brown and Ricciardone] did a pretty good job of keeping them off the bases and keeping the opponent’s offensive production down, and letting us win with our bats.”

For the third time in four games, Harvard reached double digits on the scoreboard, while strong pitching from Ricciardone gave the Crimson an easy 10-0 win in a five-inning game at Warren Field.

Though both offenses were relatively quiet through the first three innings, with Harvard taking a 1-0 lead in the third off a sacrifice fly from Regan, the Crimson broke the game open in the fourth.

Junior Mari Zumbro opened the inning with a dinger to left off of reliever Taylor Tieman, and junior Jane Alexander and co-captain Emily Henderson followed with back-to-back singles. With one out, Macadam and Regan launched matching RBI doubles to left to bring the score to 5-0.

Lange singled through the left side to bring Regan home, and Harvard took advantage of a pair of Quaker errors to put two more runs on the board before the inning was over.

Macadam iced the game with a two-run bomb to center field in the fifth, putting the run rule into effect at the end of the inning.

“The pitchers did great ... they really buckled down and focused on their game to allow the defense and offense to focus on their game,” Shaw said. “Laura pitched outstanding—in her first Ivy game, she just completely shut them down.”

The Ivy opener between the Crimson and Quakers on Saturday afternoon turned out to be a showcase of aces, with Brown coming out on top over Penn rookie Mikenzie Voves in a 2-1 victory.

The Quakers nearly got on the board in the first inning, but Henderson ranged over the center-field fence to pull back a would-be home run off the bat of Alisha Prystowsky.

Henderson then provided the catalyst for Harvard’s first run, drawing a walk to lead off the third inning. She moved to second on a sacrifice from Heritage and came around to score on Macadam’s RBI single.

The Crimson doubled its advantage in the sixth when Shaw launched a homer to center.

Penn got one back in the bottom of the inning, with Samantha Erosa reaching base on a walk and coming around on an error and a wild pitch. But Brown struck out the side in the seventh to hold on to her one-hitter.