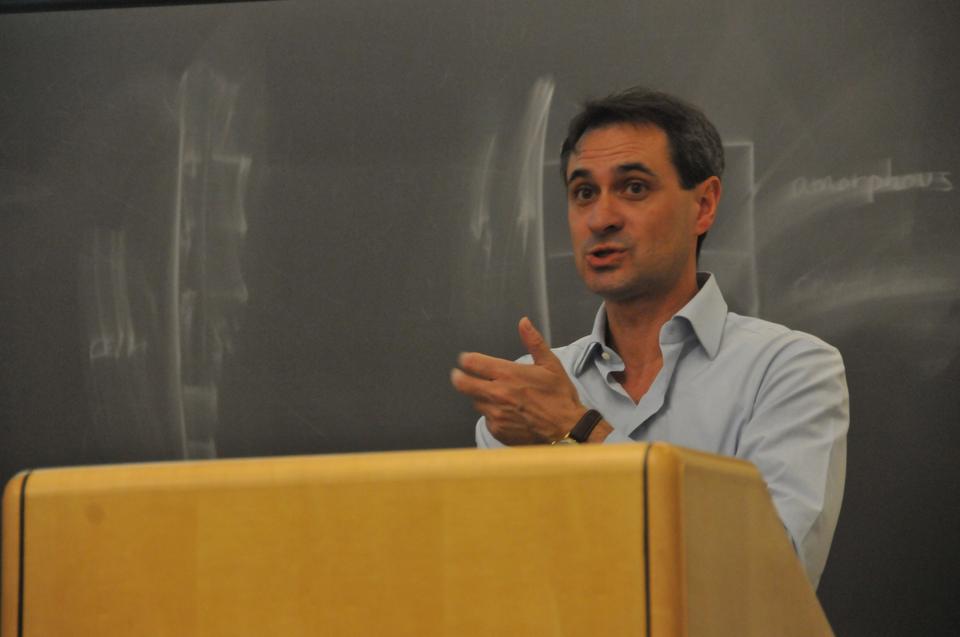 Birds swarm around an unknown object in flight, mistaking it for one of their own, but fail to communicate with the device: an autonomous flying robot.

Dario Floreano, a professor at the École Polytechnique Fédérale de Lausanne (EPFL) in Switzerland, presented his recent research on autonomous flying robots to a packed room at the School of Engineering and Applied Sciences yesterday.

Partially inspired by biological models, Floreano’s laboratory, the Laboratory of Intelligent Systems at the EPFL, has researched how to “map the sensory modalities of insects into a small robot.” The information from these sensors can be used to control the pitch and roll of robots so that they can fly in natural environments.

Floreano highlighted the robot’s capabilities during a video demonstration of the robot’s flight around a small village while avoiding obstacles such as trees and buildings.

The technology is already employed in current catastrophe response and defense efforts in Floreano’s native Switzerland, as autonomous flying robots are capable of locating and rescuing individuals and simultaneously establishing a communication network for rescuers.

Floreano said that the new technology solves fundamental issues currently limiting unmanned aerial devices, which commonly depend on GPS signals that do not provide information about complex natural environments.

“The main limitation we face today is the resolution of the camera,” Floreano said. “The only time the robot collides with small objects is when these small objects are not resolved by the camera.”

The potential extraction of principles from nature and their application to technology were also discussed with regard to other bio-inspired industry innovations.

Mirko Kovac, a current post-doctoral researcher at the Harvard Microrobotics Laboratory who studied for four years as a Ph.D student under Floreano, stressed the potential of robots using self-deployable wings to jump and glide, a current development that coincides with Floreano’s research.

In addition to examining flight, current researchers at Harvard’s Wyss Institute for Biologically Inspired Engineering are drawing from other areas of biology.

“In general, when you are looking at designing robots, we’re looking at building a robot with all the senses you have,” said SEAS Associate Professor Radhika Nagpal, who co-hosted the discussion and is involved with the Wyss Institute.

Going forward, Nagpal said that medical technology and autonomously-driven cars are potential areas in which this sensory-based technology could be employed.