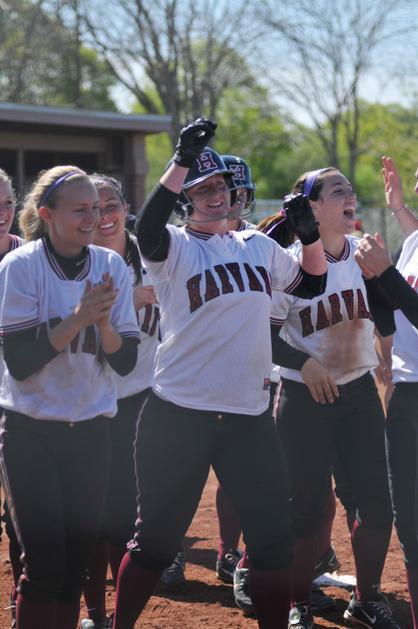 Shown here celebrating its Ivy League North Division title, the Harvard softball team encountered much more difficulty in the Tucson regional of the NCAA tournament, where it lost two games by a combined score of 17-0.
By Scott A. Sherman, Crimson Staff Writer

Harvard junior Rachel Brown was back to her old self in the NCAA Tuscon regional elimination game Saturday night, holding Texas Tech to just one hit over 6.2 innings of shutout ball.

Unfortunately for the Crimson, the performance of Brown—the Ivy League Pitcher of the Year—came far too late, as freshman starter Laura Ricciardone had already been rocked, giving up seven runs before she could even record two outs in the top of the first.

The Crimson offense, for its part, was unable to score for the second straight evening, and Harvard was eliminated from its first NCAA tournament since 2007 after a 7-0 loss.

“Nobody on the team had made it to the tournament before, so obviously it was a great experience for all of us to make the trip here,” Brown said. “I think we know now what it takes to get here and what it takes to win.”

Both the Crimson and the Red Raiders came into the contest after having been shut out the previous night, with Harvard falling to No. 8 Arizona, 10-0, and Texas Tech dropping a 9-0 contest to New Mexico State.

But on Saturday, the Red Raider offense was not to be denied, jumping on Ricciardone with seven hits in the opening inning.

Emily Bledsoe and Logan Hall led off with singles, and after a sacrifice bunt advanced them to second and third, first baseman Sandy James put Texas Tech up 2-0 with a single that was misplayed by Crimson freshman right fielder Shelbi Olson.

Holley Gentsch and Raven Richardson added two more singles to load the bases, and Taylor Powell followed with an RBI base hit up the middle. With the bases still loaded, Red Raiders’ designated player Cydney Allen ended Ricciardone’s night with a three-run double to right-center to give Texas Tech a 6-0 lead.

Brown—who finished the regular season with a 1.90 ERA but gave up 10 runs against the Wildcats—came on in relief and shut the Red Raiders down. The junior forced a ground out and a pop-up to limit the Texas Tech lead to 7-0, avoiding what could have been a forfeit before the Crimson even got a chance to bat.

“I knew, especially since we were down, 7-0, that if we gave up one more run, that was the mercy rule,” Brown said. “Out of necessity I really tried to limit their offense so we could still have a chance to make a comeback in the full seven innings.”

Brown would continue to contain the Red Raiders, giving up just one hit over the next three frames. But Harvard’s offense was unable to pick up the slack.

In the bottom of the second, Crimson junior Marika Zumbro led off with a single over shortstop before freshman Allison Scott and sophomore Ashley Heritage each struck out against Red Raiders starter Kelsey Dennis. After junior Whitney Shaw was hit by a pitch, classmate Jane Alexander lined out to end the threat.

Harvard put two runners on again in the bottom of the fourth. Freshman Kasey Lange led off with an infield single to second. After Zumbro struck out and Scott hit into a fielder’s choice, co-captain Emily Henderson walked, but Dennis got Shaw to pop out to the catcher to keep the shutout going.

“I don’t really have a reason for why we didn’t come out as strong offensively as we have been,” Shaw said. “We did have rallies at times, we did get runners on base ... [but] things just didn’t go our way.”

Brown continued her brilliant outing, putting Texas Tech down 1-2-3 in each of the final three frames. But the same fate met the Crimson offense, which couldn’t muster a hit in the fifth, sixth, or seventh against Texas Tech reliever Brittany Talley, who earned the three-inning save.

Sophomore Jessica Ferri struck out to end the game, eliminating the Crimson and dropping Harvard to 3-8 in the NCAA tournament all-time. But Shaw said getting a taste of the tournament left her and her teammates hungry for more.

“It was an unbelievable experience,” she said. “We wanted to show what we were capable of. Unfortunately we weren’t able to fully do that, but we know now it's a realistic goal to make it back. It was definitely an experience we want to continue, and make an appearance there year after year.”

The loss ended a record-setting year for Harvard, which finished with a program-best 36-16 record and an Ivy League Championship under its belt.

“We learned a lot from this,” Brown said. “It was definitely a sad way to end the season, but it certainly does not take away from the incredible season that we had.”