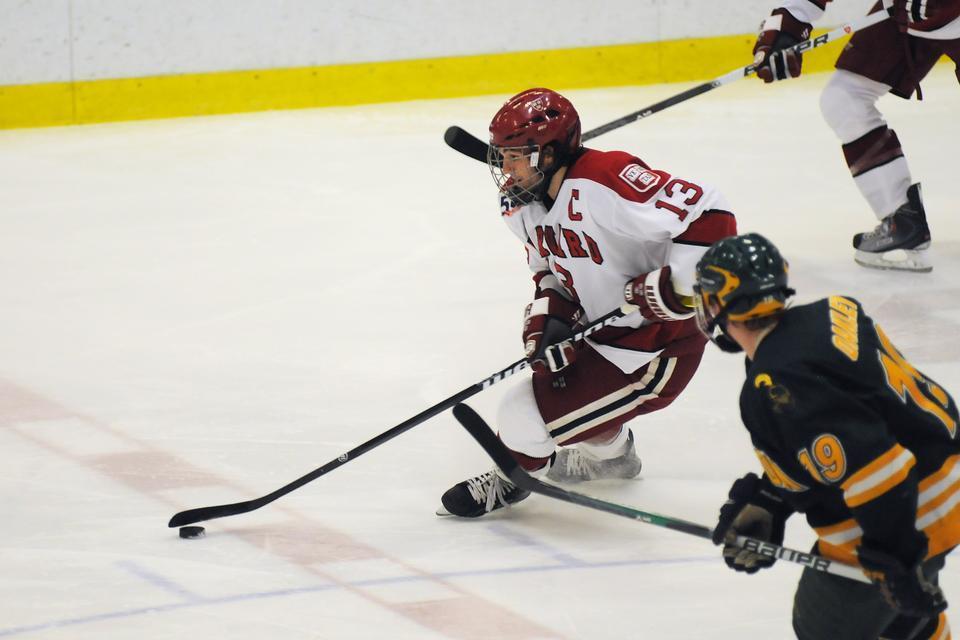 Co-captain Michael Del Mauro and the Crimson had a poor start to the season but put together a series of strong performances as the year wound down. In the ECAC tournament, Harvard swept Clarkson and won the first game against Dartmouth before dropping the next two. By Karen L. Ding
By Robert S Samuels, Crimson Staff Writer

But for the first 22 games, it was just the worst of times.

After an abysmal 4-18 start, the pieces finally fell in place for the Crimson (12-21-1, 7-14-1 ECAC), which went 8-3-1 the rest of the way. The team’s late-in-the-season hot streak propelled it into the ECAC quarterfinals, where Harvard’s season ended in a loss to Dartmouth in a best-of-three series.

“We didn’t get a lot of momentum early on, and that obviously hurt us,” sophomore forward Marshall Everson said. “We had a couple bad losing streaks, but the last eight or nine games, I thought we played pretty well…We came together late, and we started to play our style of hockey.”

The season didn’t yet turn south for the first few games. Though Harvard fell to No. 15 Union, 2-1, in the year’s first contest, the Crimson responded with an upset over No. 18 Rensselaer and a win at St. Lawrence.

That’s when things started to fall apart. Harvard didn’t win another contest for nearly two months, and the next league victory didn’t come until another month after that. In the seven-game losing streak, the Crimson was outscored, 28-11.

Harvard hit rock-bottom in back-to-back 8-2 and 5-2 losses to Dartmouth.

“We played [Dartmouth] where…we were in one of those ruts that we went through, and it showed,” Everson says. “[Dartmouth’s] confidence took over in both of those games.”

A 4-2 win over Army on New Year’s Day ended the Crimson’s skid. But the next day, Harvard fell to Vermont, beginning yet another seven-game losing streak. And other than the lone 6-2 victory against Colgate, the worst team in the ECAC, Harvard didn’t win again until Feb. 14.

But in a one-week span in February, the Crimson managed to turn its season around.

It started with a brutal 4-0 loss against unranked Northeastern in the Beanpot opener. Harvard failed to get anything going all game and was sloppy all night. In a play emblematic of the Crimson’s season to that point, a shot by a Northeastern forward hit senior goaltender Ryan Carroll’s stick, and the puck bounced over Carroll’s head into the back of the net. After allowing four goals in two periods, Carroll was later pulled in favor of senior goaltender Kyle Richter.

“Coming out of the Northeastern game, no one could feel good about the way we played,” Everson said. “We had a long week of practice to think about it.”

After tying Princeton, a team that had beaten Harvard earlier in the year, in its next game, the Crimson came into the Feb. 14 Beanpot consolation match against Boston University with a little momentum. But the effects of the loss to Northeastern still lingered.

“[There] was a lot of frustration, some anger, but we also [saw] some benefits against Princeton of when we play more of our style of game,” Everson said. “I think we took that into the BU game.”

And that’s when things fell into place.

Harvard pulled off the improbable upset against the No. 15 Terriers, winning, 5-4, in a high-scoring showdown.

The victory proved to be the turning point of Harvard’s season.

“It was a confidence booster, winning that game,” co-captain defenseman Chris Huxley said. “If you have more confidence going into other games, then it helps.”

But confidence wasn’t the only factor in the Crimson’s rebound. The team also retooled its previously poor power play with huge success. Up to and including the Northeastern game, Harvard successfully converted just 11.8 percent of its power plays. From then, the Crimson scored on power plays a whopping 32.7 percent of the time.

After the BU upset, Harvard started racking up the victories, winning four of five to close out the season and earn the 10-seed in the ECAC Playoffs.

In the first round, the Crimson had to trek Potsdam, N.Y., to face off against seventh-seed Clarkson. In the best-of-three series, Harvard needed only two games to close out the victory, winning 2-1 in the first game and 6-4 in the subsequent contest.

The following week, the Crimson met up with Dartmouth, a team that had crushed Harvard earlier in the year.

“We had two tough games against Dartmouth during the regular season,” sophomore forward Alex Fallstrom said. “But we still knew that we had a very good chance of beating them.”

The Crimson did just that in the first game, winning 3-2. But from there, Harvard couldn’t keep up its torrid pace, as Dartmouth narrowly took the next two, 2-1 and 4-3, to win the quarter final series and end the Crimson’s year.

Despite the early exit from the ECAC tournament, the team was satisfied with the large strides it made during the season.

“We had a little rocky start, and maybe the first half of the season didn’t go as expected,” Fallstrom said. “[But then] all the guys started figuring out the systems and doing their roles, and…we became a high-caliber team.”