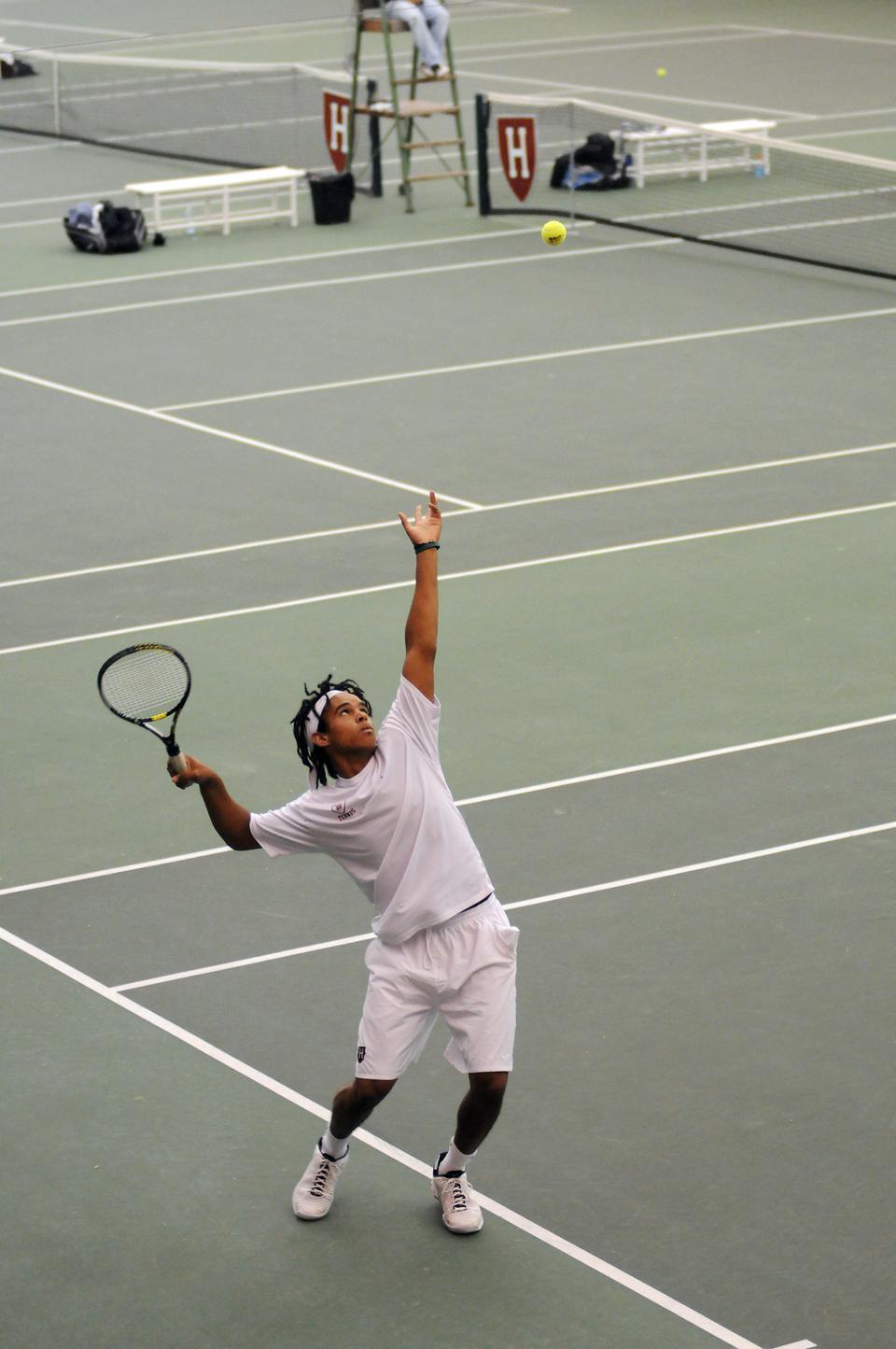 Captain Aba Omodele-Lucien closed out the year at 15-11 overall in singles and 7-2 in tournament play. In his college career he finished 57-49.
By Steven T. A. Roach, Crimson Staff Writer

Just like the top of men’s professional tennis, the competition in Ivy League men’s tennis was intense this year. And just as top players such as Novak Djokovic and Andy Murray have struggled against the dominant forces of Rafael Nadal and Roger Federer in the past, the Harvard tennis team’s best was not enough to defeat its toughest Ivy League opponents.

Despite an overall 15-10 record in this year’s dual season, Harvard’s 5-5 conference play did not allow the squad to capture the Ivy League crown or qualify for the NCAA Championships.

“There’s no question that everybody, one through six, was putting it on the line, day in and day out, and as a coach, that’s what you hope for,” said Crimson assistant coach Andrew Rueb. “Certainly it was disappointing to not win the title, and that was our goal, but we’ll just have to keep raising the bar.”

Although the team fell short of its ultimate goal, there was one player who was able to stand out and earn Ivy League recognition.

After transferring from Brown University, junior Jon Pearlman had a rough start in the fall season but quickly turned things around in the spring. Pearlman earned an 11-11 record playing at the No. 1 singles position the entire season and capped his season off with the first-team All-Ivy accolades.

“I was satisfied with my performance this year,” Pearlman said. “I felt a little nervous with the transition at the beginning of the year, but I felt it went smoothly. By spring…I was definitely playing my best tennis of the year.”

MacMaster, another source of new blood, performed consistently well on the team this year, and he gives the Crimson a promising future. MacMaster worked his way to the No. 4 position on the squad in singles after beginning the season out of the starting lineup. Out of his nineteen matches played, MacMaster only dropped five, and held the team’s longest undefeated streak in singles with seven straight victories.

He proved to be an equally strong competitor in doubles. Teaming up with Pearlman at the beginning of the semester, the duo earned a 6-2 record, but MacMaster moved up midway through the season to partner with captain Aba Omodele-Lucien at the No. 1 slot. The new pair finished off the spring with an even 7-7 record.

In contrast to the new players on the team, junior Ali Felton is a seasoned veteran playing in his third year with the squad. Playing at the No. 3 position, Felton earned an 11-12 record.

Felton also paired up again with his doubles partner from last year, sophomore Andy Nguyen. The pair started off the year in the fall with an 11-4 record in tournament play, defending their Northeast Regional doubles title, but slipped at the end to the No. 3 slot on the team and finished the dual season with an 11-11 record.

“It’s hard to always keep [the chemistry between doubles partners] going and [Felton and Nguyen] needed to build some confidence,” Rueb said. “I think, as coaches, if we would have let them play a few more matches at No. 3, they would have been able to gain more confidence.”

Omodele-Lucien, another seasoned veteran, played in his final season for Harvard. Competing at the No. 2 slot for most of the season, Omodele-Lucien at one point stood with an 8-6 record, but lost his last three dual matches of the season to finish 8-9.

In doubles, Omodele-Lucien posted a 13-9 record with partners Tchan and MacMaster and at one point held a six-match winning streak against his opponents. Omodele-Lucien finished off his doubles career with a 72-52 record.

Although the squad loses two seniors, Omodele-Lucien and Alexei Chijoff-Evans, the Crimson returns most of its roster, giving it a chance at an Ivy League title in the 2011-2012 season.

But just like for Djokovic against Nadal and Federer, the pieces will have to fall into place.