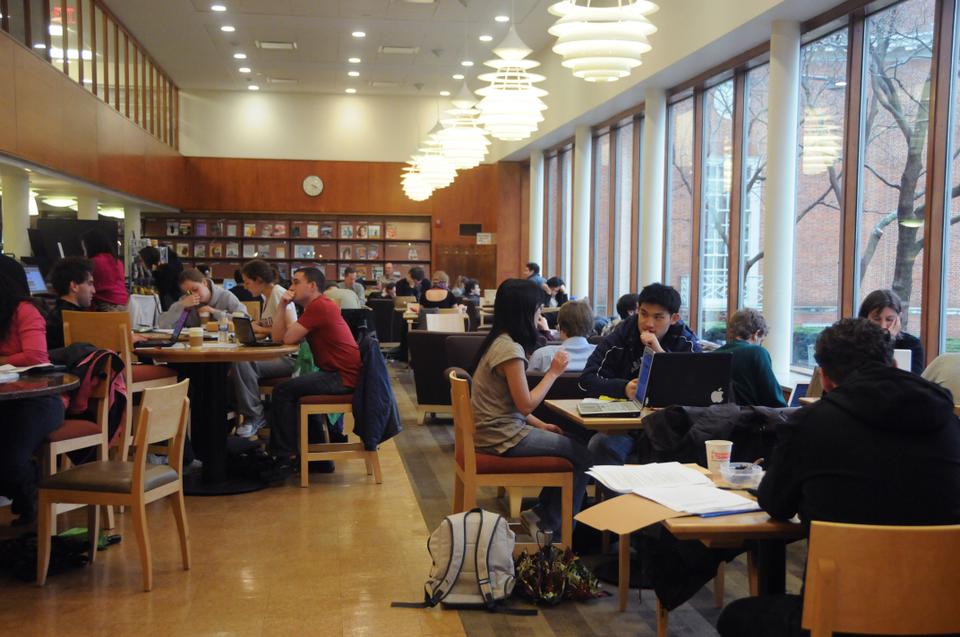 Administrators point to Lamont Cafe as an example of a positive recent development in College social space, but some students say that the semi-social location fails to live up to their definitions of a social space.
By Hana N. Rouse, Crimson Staff Writer

Clusters of frantic undergraduates study in the Lamont Library Cafe, while their peers dance to Lady Gaga in cramped dorm rooms and still others chat over cereal in House dining halls.

To work, socialize, and party, Harvard students must physically disperse, moving from one social space to another.

While undergraduates at other colleges flock to one student center, no such central space exists at Harvard.

Students and administrators acknowledge that the issue of social space is central to the Harvard undergraduate experience. Many agree that the campus’s current social space offerings are lacking, and with the recent efforts of groups like the Harvard Students for Safe Space, Harvard’s social space has again come under scrutiny as students repeatedly raise complaints about the issue.

But each Harvard undergraduate has an individual definition of social space—some want to socialize with friends in smaller casual areas while others focus on the weekend evening party scene.

As students continue to complain and administrators respond with solutions of varying success, the question becomes—what exactly is missing from on-campus social space at Harvard?

WHAT IS SOCIAL SPACE?

The definition of social space varies from person to person, both among students and among administrators, who acknowledge students’ varied needs but sometimes fail to provide spaces that undergraduates find useful.

Administrators recognize that students have a broad range of needs in terms of social space, and over the past decade Harvard has allocated a significant amount of money and resources to making additional social space available to undergraduates.

But the spaces that the school has chosen to develop in the recent past—like the Student Organization Center at Hilles and Cambridge Queen’s Head Pub—often fall short of student needs, many students say.

For example, administrators point to Lamont Cafe as an example of a recent success, but some students say that the semi-social study space fails to live up to their definitions of a social space.

Andy Balbuena ’12 says that for him, the Eliot House dining hall—a place to talk and see his friends—is enough.

“It’s where I go to hang out. Where people go to talk and socialize,” Balbuena says of social space.

House Masters say that there are many House spaces that allow for casual conversation among students.

But other students look to the alcohol-induced fraternizing of cramped dorm parties for their social fix.

But House Renewal—slated to begin in June of 2012 with Old Quincy—could take more than a decade to complete and remains a long-term solution.

Students and administrators—although they voiced various complaints about social space—largely expressed an interest in reutilizing existing spaces in Houses and the Yard.

“We want to continue to evaluate current spaces as well as identify new spaces in an effort to effectively meet the social and programmatic needs of students,” says Assistant Dean for Student Life David R. Friedrich.

Some students echo the sentiments of administrators, calling for better utilization of the rooms that currently exist in Harvard’s Houses.

“I think that there’s a lot of social space in the Houses that maybe could be used more or used better,” says Anne G. Douglas ’12, Adams House Committee co-chair.

Student organization leaders, who say that it is often difficult to find on-campus space for events, agree that restrictions on some House rooms that are available only to House members are to blame in part for the apparent lack of social space.

Students also complain about a lack of social space during freshman year in particular.

Upperclassmen benefit from House life, but without that centralized social scene, many freshmen say that they have difficulty finding activities for weekend nights.

A survey conducted in December by the Freshman Dean’s Office revealed that a lack of social space is a primary concern among first-year students.

The Freshman Space Working Group—a collection of students and administrators formed earlier this school year to address concerns with freshman social space—recommended, among other things, that the College renovate the common rooms of freshman dorms and that Annenberg Dining Hall remain open for longer hours, giving freshmen another space in which to socialize.

Dean of the College Evelynn M. Hammonds is currently reviewing their recommendations and any planned changes to freshman social space have yet to be finalized.

THE DESIRE TO DRINK

Other students search for easier access to alcohol and greater availability of events with alcohol, a desire that the administration may never be able to meet.

“I think the biggest problem is that we don’t have a place of our own, away from our proctors and away from school regulations,” says John Kye ’14.

Administrators recognize that some percentage of Harvard students see socializing as intoxicated partying and seek a large on-campus venue in which to replicate the atmosphere of parties that take place in cramped dorm rooms.

But despite student pleas for a school-sanctioned on-campus party space, administrators say that the type of social space that those Harvard students are asking for is impossible for them to provide.

“We can’t be a refuge from the laws of the Commonwealth,” Dean of Freshman Thomas A. Dingman ’67 said during a March interview on the results of the FDO’s freshman survey. That survey revealed a desire among freshmen for a more lenient alcohol policy in the Yard, where alcohol is banned from dorms entirely.

“The biggest problem I have with the Harvard social scene is that freshman guys don’t have enough space to throw down our own parties,” Kye says. “A couple of times me and my roommates wanted to throw down in our own room and we got busted by our proctors.”

Still other students ask for the creation of new casual social space. For decades, this desire for new space has manifested itself in calls for an on-campus student center—a central building for on-campus social life.

Brian I. Choi ’13 says that he sees a student center as “a place where students are actually comfortable hanging out in.”

“I don’t think students at Harvard have a space for that,” says Choi, also a Crimson photo editor.

Students say that although Harvard may intend for Houses to be “microcosms of the College,” they often want to meet students outside of their Houses.

“It’s a very segregated situation now where people meet in their own dining hall and you really don’t meet people outside of your House,” Balbuena says.

Despite repeated attempts by the administration to create a student center, the lack of such a building remains a permanent obstacle to Harvard social life, some students say.

“This is like the student center on campus,” Ebrahim says, pointing around the crowded room of Lamont Cafe. “And that’s a problem.”

University President Drew G. Faust has said that she hopes to see the creation of more common space for students, faculty, and staff, citing the lower floors of the Holyoke Center as one possible option.

According to Faust, the funding for the creation of a student center is being considered as a possible goal of the upcoming capital campaign.

“My goal would be to find a space where everybody could have shared interactions during the daytime and then at night it would belong to the undergraduates,” Faust says.

‘A LOT OF OPTIONS’

Despite these concerns, many students say that although the Harvard social scene may have its flaws, ultimately they have been satisfied with their experience.

“I never felt like I wanted something that wasn’t available,” says Luke L. Sperduto ’11.

Many students say that overall they were happy with Harvard’s social life, and only articulate minor problems with it.

“A social space is a place where you can hang out with your friends or party or something,” says Kevin A. Chenault ’14. “You might have to look for it, but I think there’s a lot of options.”

—Monika L. S. Robbins contributed to the reporting of this story.