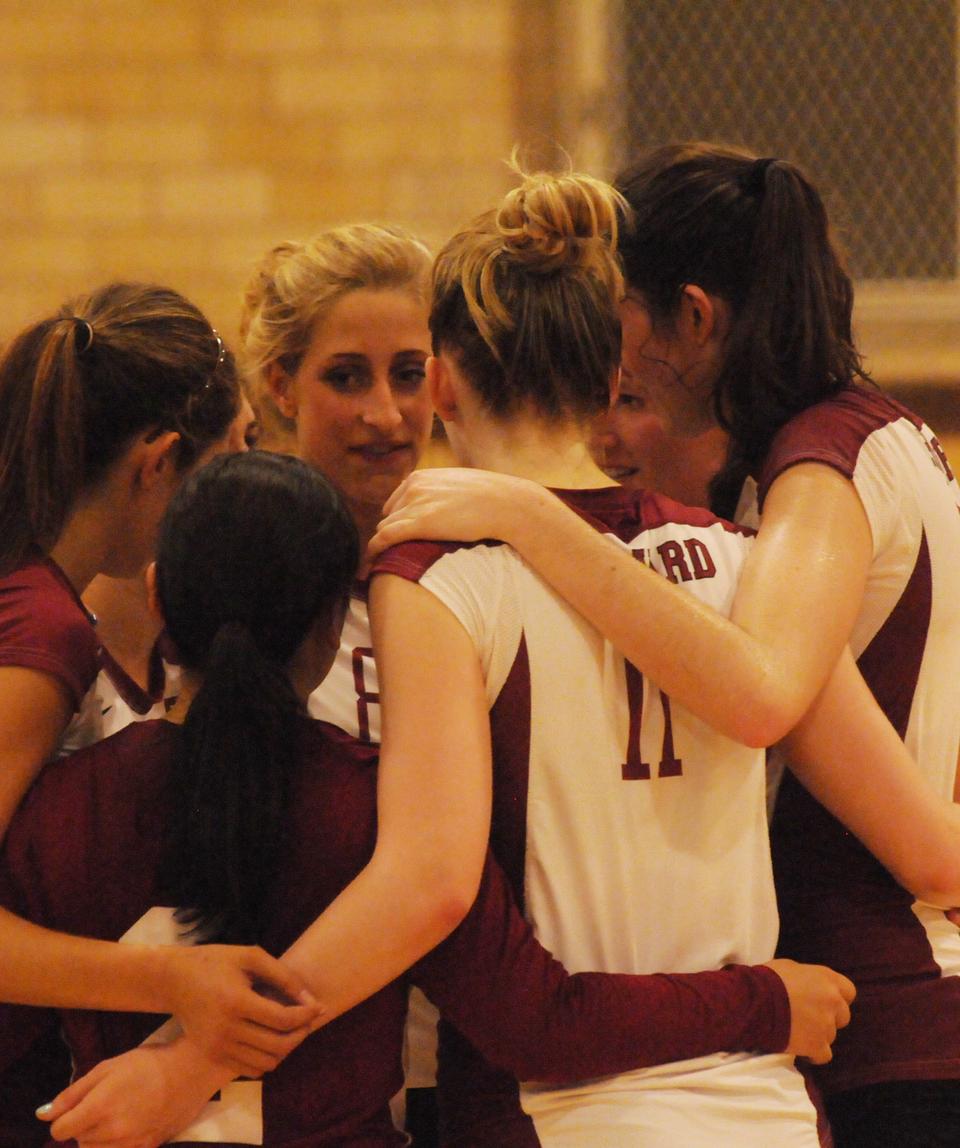 Harvard and New Hampshire traded games last night, but the Crimson was able to edge out the Wildcats, 15-12, in the deciding game. Harvard returns to action this Friday to face Holy Cross.
By Jacob D. H. Feldman, Contributing Writer

In a tightly contested fifth set, the Harvard women’s volleyball team (5-2) narrowly topped the University of New Hampshire (0-12) to win its home opener.

Up 13-12 in the decisive final set, the Crimson caught a break when the first referee ruled that an attack attempt grazed a Wildcat player before whizzing out of bounds, giving Harvard a match point opportunity.

The team took advantage as outside hitter junior Taylor Docter killed the ball to slam the door on the visitors.

“The mentality was to just get it done,” co-captain Sandra Lynne Fryhofer said of the team’s attitude down the stretch.  “We weren’t going to let this game get away from us.”

From the outset, the teams were evenly matched, battling back and forth to a 14-12 score midway through the first set, with New Hampshire enjoying the early advantage.

Then, in a play that would foreshadow the hectic finish, the Wildcats pushed their lead to three when the first referee ruled an errant attack touched a Harvard blocker before landing out.

But the Crimson responded by winning 13 of the next 17 points to take the first set 25-19, holding New Hampshire to a first set hitting percentage of .026 in the process.

Despite the Wildcat’s winless record, Harvard coach Jennifer Weiss and the team knew it would be in for a struggle.

“We didn’t even talk about the record,” Weiss said. “New Hampshire has some great blockers and attackers on the outside.”

In the second set, the Wildcats exhibited their resilience by jumping out to a 6-0 lead and holding on to win the set 26-24 after the Crimson tied the score at 24.

“I felt pretty comfortable because this is the gym we practice in so it was more of a comforting feeling playing at home for once.”

MacLean played a big role in regaining control of the momentum in the third set.

With several key blocks and kills, she helped the team win the set 25-21.

Thanks to her strong third set, in addition to key contributions throughout the match, MacLean led the team with 19 kills in her first full match after playing in only one set in Harvard’s first six contests.

After going up two games to one, Harvard was unable to finish the match in the fourth set, registering a match-low of .167 hitting percentage in the frame.

The Wildcats tallied a .385 hitting percentage and killed 18 balls en route to tying the match at two and setting the stage for a nail-biting fifth set.

For a team with only two seniors, Harvard showed plenty of composure in the fifth set as it attempted to start their five-game home stand off with a win.

The stakes were just as high for New Hampshire, which was looking for its first win.

The teams battled evenly with points punctuated by diving stabs and timely blocks.

But when the game hung in the balance, with the teams tied at 11 apiece, it was the Crimson who stepped up.

After Harvard won two long points to go up 13-11, the Wildcats called a timeout to gather itself for the final push.

In the huddle, Weiss talked specific strategy and made sure her team was confident and composed before sending them back onto the court.

“The team came out in control.” Weiss said. “We knew what they were going to try to run and what we were going to do and we executed the game plan, which was good.”

Even though Harvard escaped with a win, Weiss recognized that there is always room for improvement, especially early in the year.

“We were up and down. We have a lot that we can learn from the match for the matches coming up,” she said.

“Hopefully this match will bring us more confidence and we’ll have a good weekend,” Fryhofer added.

Next up for the Crimson is a match with Holy Cross on Friday to open the Harvard Invitational.

Harvard will then take on Navy and Northeastern on Saturday before beginning their Ivy League slate with a home match the following weekend against another school from New Hampshire, Dartmouth College, on Sept. 24.