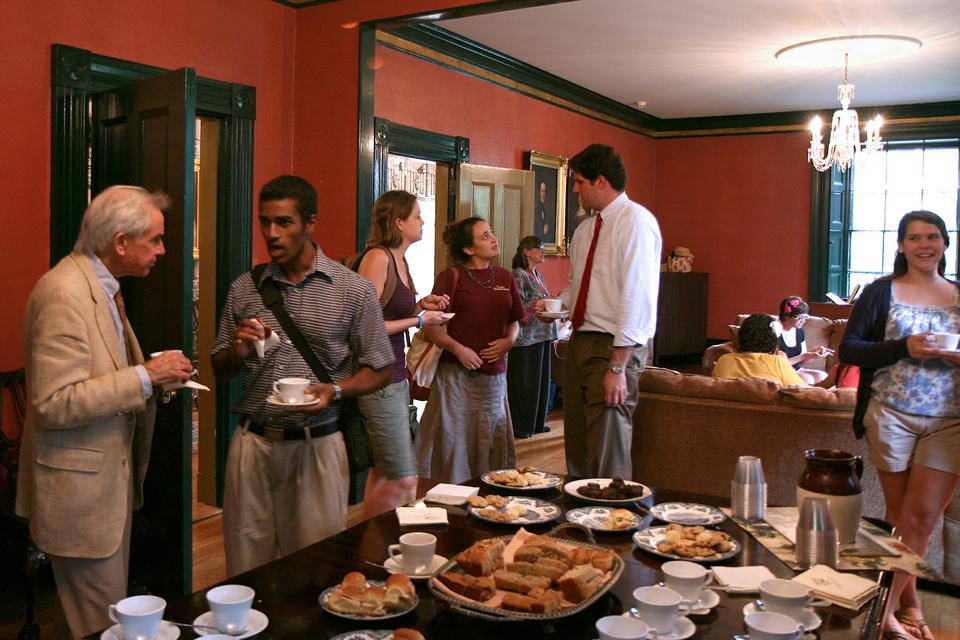 Students, staff, and other members of the Harvard community converse and enjoy tea and treats during Wednesday Tea at Sparks House, a tradition started by the late Rev. Prof. Peter Gomes. By Karen Zhou
By Justin C. Worland, Crimson Staff Writer

As bells rang out across Harvard’s campus to mark the five o’clock hour, Sparks House—the former residence of the late Reverend Peter J. Gomes—opened its doors again on Wednesday to continue its tradition of hosting a weekly tea.

Though the custom was put on hold earlier this year after Gomes’ death, a hearty crowd of visitors from across the University showed up yesterday ready to mingle, snack, and relax.

“It’s a real joy that we are doing this. Tea has been such a good tradition of hospitality and fellowship at the church,” said Administrative Assistant at Memorial Church Christine E. Whiteside. “We wanted to continue that.”

Though Gomes passed away in February, many continued to reflect on his legacy, including the teas that he used to hold.

“To enter Sparks House for the first time [after Gomes’ death] is ... to feel both the poignance of his absence and the warmth of his welcoming, encompassing spirit, sustained in the hospitality of the Memorial Church,” said one longtime tea attendee and Harvard affiliate in an email to The Crimson.

Guests said they noticed subtle differences between the revived tea and the teas that Gomes once held.

No longer is a guest of honor selected to pour tea each week. In the past, Gomes would, in Anglophile fashion, choose a friend or acquaintance to pour tea for the other visitors—a position of great honor, according to Whiteside. Guests now pour tea for themselves.

And although the house is not completely empty, it lacks the previous air of a “veritable museum,” according to longtime caterer of Gomes’ events Gerald S. Pierce. Gone are the portrait-filled walls, the grand piano, and the ornate silver serving dishes, trademarks of Sparks House during Gomes’ lifetime.

One longtime tea attendee joked that the removal of Gomes’ numerous collections gave visitors an opportunity to finally see the architecture of the house.

The few pieces from Gomes’ time that have remained include portraits of the home’s first owners, former University President Jared Sparks, a member of the Class of 1815, and his wife.

According to Pierce, many of the other portraits that once adorned the walls were more difficult to identify.

“On the spot, [Gomes] would tell stories about the portraits that were just completely made up,” he said.

“There was one who looked like my Aunt Vera. So he just called her that,” the church’s Pastoral Coordinator Jan C. Randolph recalled with a laugh.

Though Gomes died months ago, he would likely not be surprised that his friends still have him on their minds.

“Well you know Jerry, he may well be a star,” said Pierce, imitating a line Gomes would repeat about a Harvard professor. “But I am an institution.”

Though hospitality was the word on the minds of the church’s staff, the event had to come to an end.

“We will kindly ask you to make your leave,” said Epps Fellow Nathaniel P. Katz with a smile.