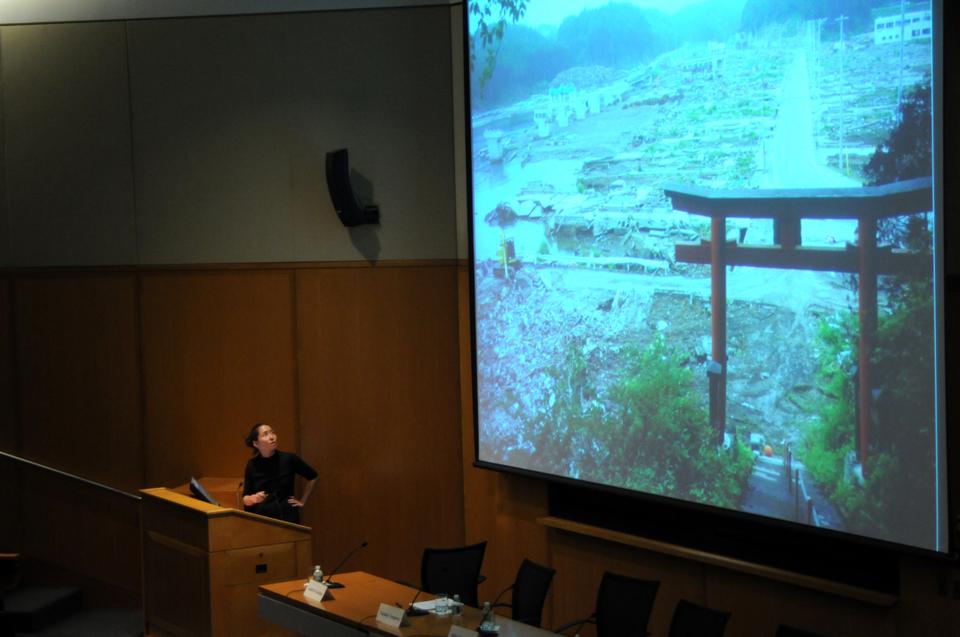 Friday afternoon a panel of Harvard affliates who worked in effort to rebuild Japan during the summer discussed their projects in the Tsai Auditorium.
By Michelle M. Hu, Crimson Staff Writer

Due to the March earthquake that devastated much of northeastern Japan, Jun Shepard ’14 found out that her internship at the Tokyo Gas Company was cancelled.

But unlike many other students with internship offers in Japan who decided to work elsewhere, Shepard decided to join the relief effort.

“I wasn’t afraid because I’ve been in earthquakes before in Japan,” said Shepard, who is part-Japanese and a native Japanese speaker. “I was pretty well aware about the entire process.”

Shepard spent six weeks this past summer in northeastern Japan, where she spent two weeks collecting food donations from Tokyo citizens and four weeks distributing items and assisting with temporary housing. She spoke about her project last Friday in a panel discussion about Harvard-affiliated summer rebuilding efforts in Japan.

The panelists agreed that the effects of radiation exposure and the unstable financial climate would present long-term challenges for Japan beyond the present relief efforts.

“There needs to be more [radiation] research to come up with answers that people trust,” said Mazereeuw, who worked with Graduate School of Design students to build a community center.

Shepard said people need to accept that economic assistance may be the most effective means of supporting recovery efforts.

“The unemployment rate is skyrocketing, especially in the fishing industry,” she said, adding that fundraising and promoting industrial growth are critical ways to help.

“You heard so much about stoicism and endurance last March and April, but clearly there’s a limit to that,” said Andrew D. Gordon, a history professor and event moderator.

The Japanese government issued a report stating that the suicide rate rose 39 percent in the Miyagi region, an area that was particularly ravaged by the earthquake. Even in Tokyo, which was not in the disaster zone, suicides were 27 percent higher.

Unlike Shepard, Bogardus spent most of his time in an office in Tokyo, where he helped translate files that were sent to foreign aid organizations.

“When I signed up for a volunteer job, I had a romantic vision of being on the ground, helping and getting dirty and gritty,” he said. “It became clear to me that there are endless amounts of Japanese people who are already helping and doing it very well.”

He added that he realized that he would be most helpful by “working in this office and acquiring the resources that were necessary to help the recovery effort.”

Gordon, who is the director of the Reischauer Institute, said the institute will continue to fund students to assist with recovery efforts.