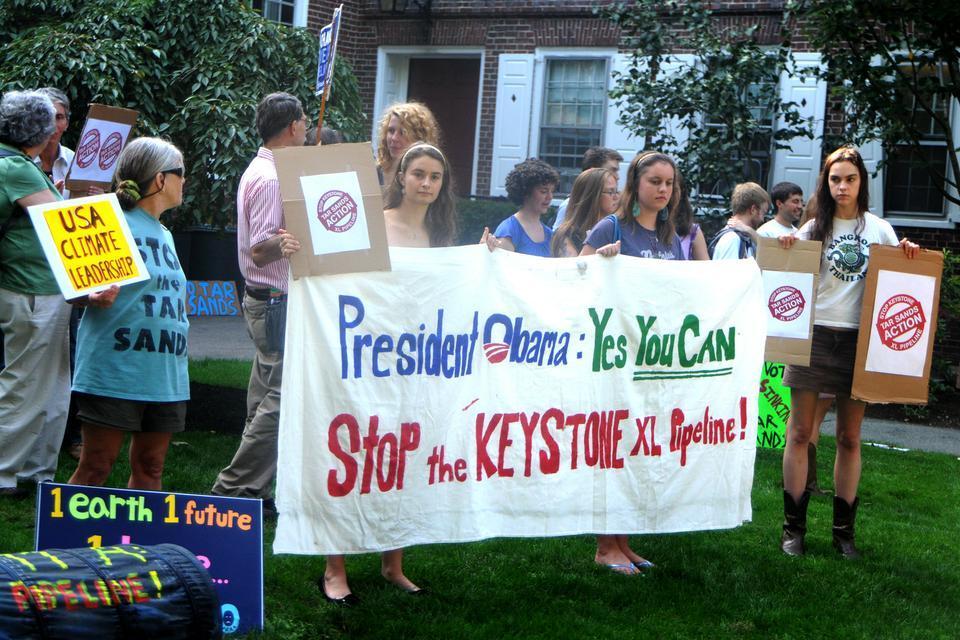 Patricia Levi '12 and Katrina Malakhoff '14 hold up a banner as part of a silent protest to get the attention of David Axelrod on his visit to Harvard.
By Samuel Y. Weinstock, Contributing Writer

Approximately 30 students and other activists lined a sidewalk in the Kirkland House courtyard in silent protest of a pipeline proposed to run from Canada to the Gulf Coast as President Obama’s top presidential strategist David Axelrod made his way to an installment of the discussion series, “Conversations with Kirkland.”

Zhao said that while the environmental impact of the pipeline is a serious concern, the protest was meant to be positive.

“We are trying to support the President in his ability to reject the pipeline. It’s a disaster in a number of ways,” Zhao said, citing threats to water security, farm security, and indigenous rights.

This is the second EAC protest of a “Conversations with Kirkland” talk in recent weeks. Two weeks ago, the EAC protested during a discussion with Obama’s campaign manager Jim Messina.

“I think that the silence is really powerful,” Zhao said. “We are the mainstream. Not everyone wants to yell.”

As Axelrod entered Kirkland Courtyard, EAC member Collin A. Rees ’12 walked up to Axelrod and asked him, “How do you and the President plan to address flagging voter enthusiasm among the environmental base due to the pipeline issue?”

After quietly responding to Rees, Axelrod briefly addressed the protesters.

“I appreciate you guys being here and your commitment,” Axelrod said. “You may be silent, but you’re being heard.”

EAC Treasurer Kyle B. Flanagan ’11-12 said that many of the protesters had supported Obama when he first ran for President because of his stance on environmental issues.

“We’d like him to continue his commitment to the environment,” Flanagan said.

Zhao said a major motivation for the protest was to let the Obama administration know that approving the pipeline would disappoint his liberal voter base.