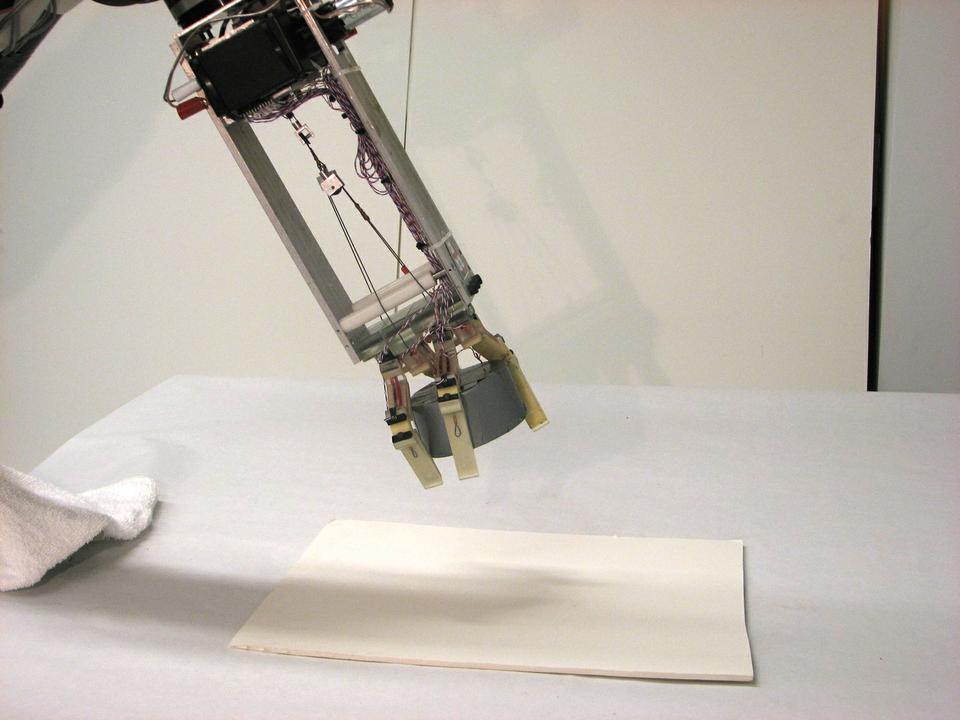 From developing robotic hands to inventing devices that may transform heart surgery, the Harvard BioRobotics Laboratory is on the brink of revolutionizing the field.
By Julia E. Kete

Obama is making the nerd cool again: this June in Washington D.C., President Obama pledged $70 million for robotics research. Here in Cambridge, the Harvard BioRobotics Laboratory is on the brink of revolutionizing the field. The Lab, started in 1990 by Abbott and James Lawrence Professor of Engineering Robert D. Howe, focuses on technology in the biosphere.

“The component technologies are getting cheap enough you can use [robots] to help real people,” says Leif P. Jentoft, a graduate student at the Lab. “When you get a good breakthrough on research,” he says, “you can transfer that out to actually making a difference in the real world.”

“People have been trying to build robotic hands for a long time, 30 years, maybe even more,” explains Jentoft. People envision a world where they can be used for everything from cleaning to the disposal of roadside bombs.

But robotic hands have never successfully been integrated into society, because they are too fragile and expensive. This time, things might turn out differently. “What we’re doing in our lab is to see how simple we can get away with and still be useful,” Jentoft says.

This robotic hand is a far cry from the sensor and motor-covered models that labs have produced in the past. It has only one motor, as well as a transmission that distributes tension equally between different cables, which connect to soft rubber flecture joints. “Rather than moving exactly how the motor commands them to, they have to pull inwards, but however they pull inwards is something that the underlying object will dictate,” Jentoft explains.

Harvard’s robotic hand currently has a patent, and the Lab is in talks with local companies who could sell the device in the future. “The classic use case for robots is anything that’s dull, dirty or dangerous for humans to perform” Jentoft says. “In all these cases, a good hand is really, really important, and especially a good hand that’s cheap enough that the people who need them can actually afford it.”

Others at the lab, like graduate student Samuel B. Kesner, are working on a device that may transform heart surgery.

“The problem is, right now when you do almost any kind of surgery on the inside of the heart, the heart has to be stopped and emptied of blood,” says Kesner. Stopping the heart and oxygenating the blood from outside the body is both dangerous and invasive.

“Essentially it’s a dead structure at that point and so you’re guessing, ‘OK, well when it’s beating I want it to do this, so if I have to move this over here and cut this and sew this,’ but they don’t know until they start it back up if it works,” Kesner explains.

Kesner is the third Ph.D. student to work on a project that began seven years ago at the Lab: engineering a robotic catheter that can perform heart surgery inside the heart while it is still beating.

A major challenge, actually, was the heartbeat itself. “If you were to put a rigid tool in [the heart], you would just pump a hole in it,” says Kesner. He designs tools that use imaging to track the motion of the heart, preventing the robot from colliding with the fast-moving tissue.

Kesner explains, “If we want to repair a valve in the heart, we have to create a tool, which can interact with that heart while it’s moving.” It’s a daunting task that has a promising future. The catheter may start appearing in hospitals within the next five to 10 years.

The proximity of Boston’s world-class hospitals is essential to the Lab’s research. Ignacio Galiana, a Ph.D. student came to the Lab all the way from the Polytechnic University of Madrid to do research on a device for rehabilitation of post-stroke patients. “The main thing is the resources, and the ability to interact with doctors working in this area,” he says.

The Lab is a small place with a big mission. “It’s really exciting, I think it’s a really good environment,” says Julie Xie ’12, an engineering concentrator who works in the lab doing computer programming.  “You learn a lot working here,” she adds.