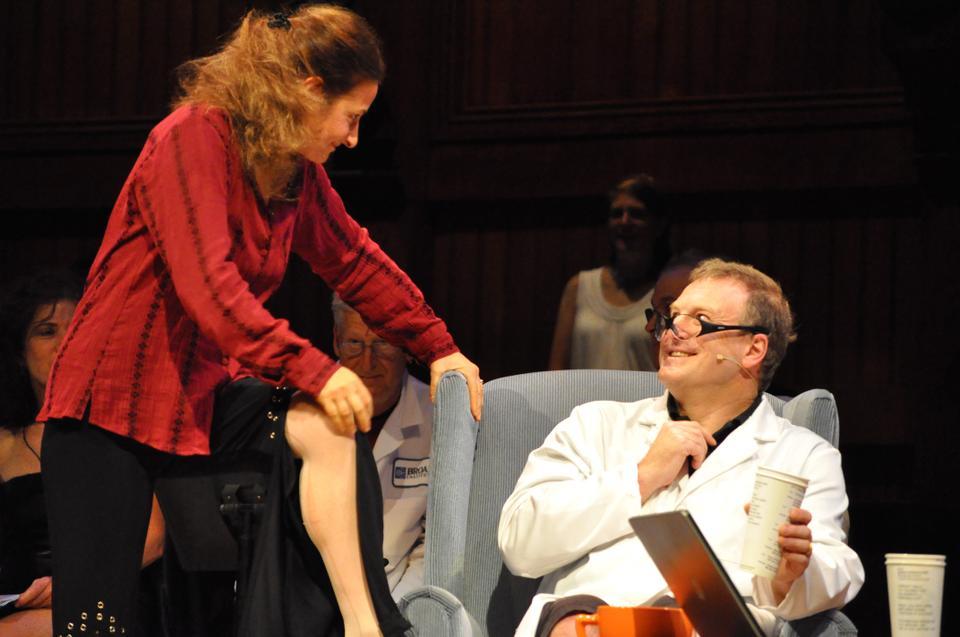 Maria Ferrante seduces Daniel Rosenberg with a song about caffeine during "Chemist in a Coffee Shop: A Mini-Opera in 5 Acts" at the chemistry themed 21st annual Ig Nobel Prize Ceremony in Sanders Theatre on Thursday.
By Melanie A. Guzman, Crimson Staff Writer

Twenty-three years ago, Darryl T. Gwynne of the University of Toronto and David C. Rentz, a retired entomologist, published a research paper on beetles and their attempts to mate with beer bottles on the side of the road in western Australia.

The beetles perceived the brown color and reflection of the beer bottles as characteristics of a giant female beetle and wasted sperm on failed efforts to mate with the glass products.

“Personally, I think it’s good to communicate what I do as a scientist to non-scientists,” Rentz said. “And humor is a good way to do that.”

Hosted by the organization Improbable Research, the Ig Nobel Prize Ceremony honors scientific research that makes people laugh and think, according to the Improbable Research website. A satiric take on the Nobel Prize ceremonies, the Ig Nobel Ceremony invites Nobel laureates and other researchers to participate in a science-themed comedy performance.

The theme of this year’s ceremony was “chemistry,” a word that prompted applause and whooping from the audience throughout the ceremony. Previous themes have included “bacteria” and “redundancy.”

“If you didn’t win an Ig Nobel Prize this year—but especially if you did—better luck next year,” Abrahams said at the end of the ceremony.

The ceremony also recognized researchers from Japan who found the ideal density of airborne wasabi and scientists from the Netherlands who found that people have a tendency to make fewer impulsive decisions when they have the urge to urinate.

“The award is also a recognition of creativity and originality, and that’s something that’s important to scientists,” said Mirjam A. Tuk, lead author of “Inhibitory Spillover: Increased Urination Urgency Facilitates Impulse Control in Unrelated Domains.”

After hearing about the event from his academic advisor, Ari D. Brenner ’14 volunteered to run the press desk for the ceremony.

“This show highlights scientific achievements that are pretty atypical,” Brenner said. “But I think it glorifies advancement in general. It’s also about sparking innovation for innovation’s sake.”

But not all attendees thought highly of the scientific achievements.

“I came to the ceremony because I wanted to see what not to do in science later in my life,” said Veronika Stelmakh, a third-year grad student at the Massachusetts Institute of Technology.

No Ig Ceremony would be complete without Jim Bredt, a materials scientist who for the past 20 years has served as Ig Nobel’s human spotlight, which entails painting his entire body silver while sporting aluminum-colored bikini bottoms and shining a flashlight on people.

In addition to premiering “Chemists in a Coffee Shop,” a mini-opera that celebrated the chemistry of the caffeinated beverages, The Ig Nobel Ceremony also featured a series of “24/7 lectures.” Researchers described their studies in technical terms in 24 seconds and in simple colloquialisms in seven words.

Assistant Professor of Anthropology at the University of Illinois Kathryn B. H. Clancy condensed her study on vaginal pH into universal language.