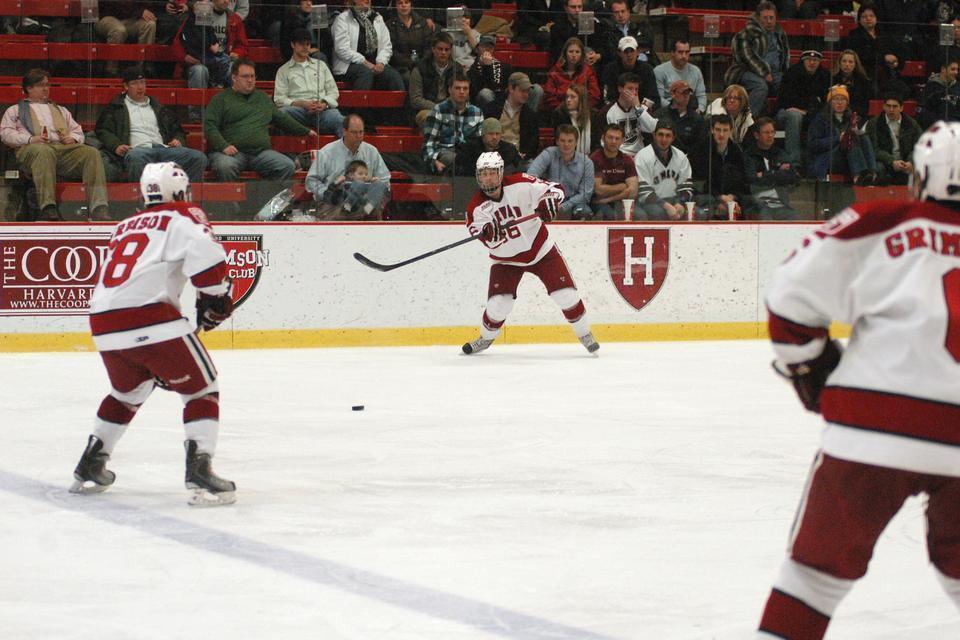 Shown here in earlier action, junior Alex Fallstrom (center) led the Crimson with two goals against No. 6 Boston University on Saturday night. Fallstrom's seven goals are second-best on the team this season.
By Scott A. Sherman, Crimson Staff Writer

In sports, the difference between winning and losing can often come down to the smallest of margins, and on Saturday night, the Harvard men’s hockey team found itself falling literally just inches short of what would have been the biggest win of its season to date.

Late in the third period, the Crimson was up, 3-2, against No. 6 Boston University when Terriers’ forward Ben Rosen fired a backhanded shot off the left goalpost.

The referees initially ruled no goal, but video replay showed the puck to have just squeaked over the goal line before Harvard freshman goaltender Steve Michalek could dive on it, giving the Terriers a game-tying score.

Just over two minutes into the ensuing overtime period, BU squashed the Crimson’s upset attempt and finished off its comeback when the Terriers’ Garrett Noonan scored off a rebound to give BU a 4-3 victory.

“I thought we played well for the first 40 minutes,” junior forward Alex Fallstrom said. “And then we let them take over a little bit, which ended up costing us the game.”

One night after the Crimson saw its 18-game streak with a power-play goal halted, the Crimson’s man-up attack came out roaring on Saturday, scoring three times in the first period.

Fallstrom put the Crimson on the board with a score 3:06 into the contest, redirecting a Marshall Everson slap shot from the right of the goal past BU goalie Kieran Millan.

“I went in and I dropped it to [Everson],” Fallstrom said. “He took a shot, which I deflected into pretty much an open net.”

After neither team could find the back of the goal for the subsequent 13 minutes, the end of the period produced an offensive onslaught.

BU’s Chris Connolly tallied his first score of the season to tie things up at the 16:32 mark of the period, putting back a rebound of an Adam Clendening attempt for a power-play goal.

Fallstrom responded with his second score of the contest—and his seventh of the season— a minute later.

“We caused a turnover and [Everson and I] came in on a two-on-one,” Fallstrom said. “Their goalie came out really far, so I just faked a shot, took it to the middle, and just put it in an empty net.”

Following a blown two-on-one opportunity for the Terriers, forward Alex Killorn gave Harvard a two-goal lead with just nine seconds to go in the period. The senior orchestrated a give-and-go with classmate Eric Kroshus before firing past Millan for his 10th goal of the season.

Neither team could score in the second, despite each having two power-play opportunities. Harvard outshot BU by a 13-5 margin during the frame but could not convert, with Fallstrom just missing a chance for a hat trick by hitting the post behind the BU netminder.

“I thought we played really well in the first two periods,” sophomore defenseman Dan Ford said. “[But] in the third period we came out a little flat and didn’t stick with what brought us success in the first two.”

The Terriers took advantage of that flatness and cut the deficit to one when Connolly put back a rebound with 11:09 to go in the game.

“I feel like their second goal was kind of a momentum shifter for them,” Fallstrom said. “I think we had the game under control up until that point, and after that they really got going and started creating a lot of opportunities.”

Soon after, Rosen tied the game with his first goal of the year following a scramble around the Harvard crease.

In the overtime, after a Crimson neutral zone turnover, Michalek saved a Connolly attempt from the right but left the rest of the net exposed. The rebound went directly to a trailing Noonan, who was able to easily put back the rebound to give BU the win.

“We probably stopped attacking as much offensively,” Ford said. “That just led to them having more puck possession, and they put a lot of pressure on us and were able to get two goals.”

Alex Chiasson assisted on the final three Terrier scores, joining Clendening with three assists on the evening. Everson had two assists for Harvard, while Michalek made 30 saves in defeat.

It was the second straight 4-3 win over an intra-city rival for BU, which was coming off a victory over Northeastern. The Crimson lost its second straight after falling to No. 14 Union at Fenway Park Friday night.

“We definitely learned from this game that when you’re protecting a lead in the third period, you’ve got to play smart, but you’ve still got to attack offensively,” Ford said. “We kind of stopped doing that and played a little more passively. There’s too much time to just sit on a two-goal lead against a good team for two periods like that.”