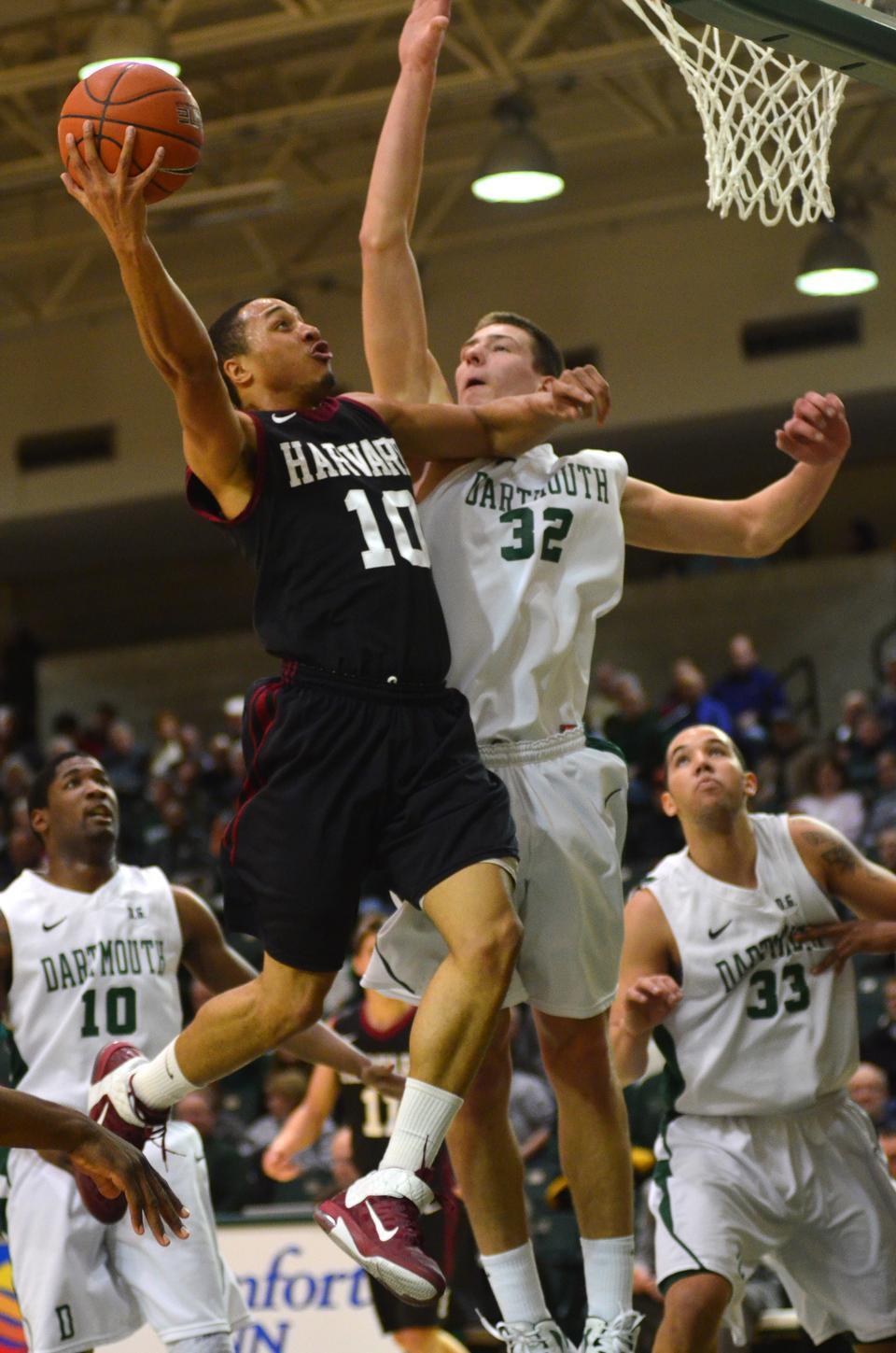 Junior Brandyn Curry attacks the basket against Dartmouth rookie Gabas Maldunas during the Crimson’s 54-38 win over the Big Green. Curry was held scoreless in Saturday’s matchup, but the point guard finished with a team-high five assists in 29 minutes.
By Dennis J. Zheng, Crimson Staff Writer

HANOVER, N.H.—If the No. 24 Harvard men’s basketball team is to live up to expectations and earn the first outright Ivy title in school history, the league favorite must be prepared to grind out low-scoring affairs in front of sizeable road crowds throughout the Ancient Eight.

The Crimson did just that Saturday evening when freshman guard Corbin Miller had a game-high 13 points and classmate Steve Moundou-Missi added nine to lead Harvard to a gritty 54-38 win at Dartmouth.

The Crimson (16-2, 2-0 Ivy) led by five early in the second half before jumping out on a 18-3 run over the next seven minutes to drop its Ivy travel partner for the sixth straight contest.

“I give all the credit to Harvard,” Dartmouth coach Paul Cormier said. “They just came out, they played terrific defense, and it’s a real credit to them.”

Though Harvard had picked up a 63-47 victory over the Big Green two weeks ago at Lavietes Pavilion, it trailed by as many as seven early on in the second half of the Ivy opener for both squads.

And so when Dartmouth held the Crimson scoreless for nearly six minutes to open Saturday’s game—or when it cut the Harvard lead to 28-23 on a three-pointer by Melville at 13:35 in the second half—an upset did not seem impossible.

But on a night when reigning Ivy League Player of the Year Keith Wright had four points on two-of-seven shooting and point guard Brandyn Curry was held scoreless, Harvard relied on its reserves to provide a key offensive spark.

The Crimson’s bench outscored its starters, 32-22.

“Going into this year, we thought the keys for us would be our bench and our balance,” Harvard coach Tommy Amaker said. “Now, as we get into late January, I’m hopeful if we can stay healthy, continue on the path we started tonight, it will be a nice opportunity for us.”

And wielding the nation’s fourth-ranked defense in points allowed per game, Harvard is well-equipped to remain competitive when its stars’ shots aren’t falling.

The Crimson held the Big Green to six assists and forced 17 turnovers.

Harvard’s latest win was indeed anything but pretty, as the visitors again struggled with the ball at the beginning of the second frame, going without a field goal until junior Christian Webster nailed a three-pointer from the right wing six minutes into the frame.

Then Miller, who showed no signs of rust after missing three games due to a left thumb injury, began the decisive second-half spurt with a jumper on the baseline on the Crimson’s next possession.

Several minutes later, Casey came off a screen to slam home a two-handed jam—his first points of the game—to give Harvard a double-digit lead for the first time on the night.

Two possessions later, Miller hit a smooth triple from the left wing off a pass from Wright.

Following a Big Green turnover, Miller nailed a long jumper off the dribble to grant Harvard a 41-26 advantage with 8:55 left in the game.

Returning to action after missing two straight games with a hip injury, Webster came off the bench and had eight points on three-of-four shooting from the field.

The Crimson led, 23-16, at intermission after a first half in which the two squads combined for 21 turnovers.

“We didn’t finish,” Amaker said. “We didn’t make a ton of baskets that we thought we should have made, especially around the goal.”

Dartmouth did not fare much better, as only three of its players scored in the first half.

The Big Green went 6-of-20 (30 percent) from the floor and reached the free throw line once.

The Crimson will look to preserve its undefeated Ivy League record when it visits Yale and Brown this coming weekend.