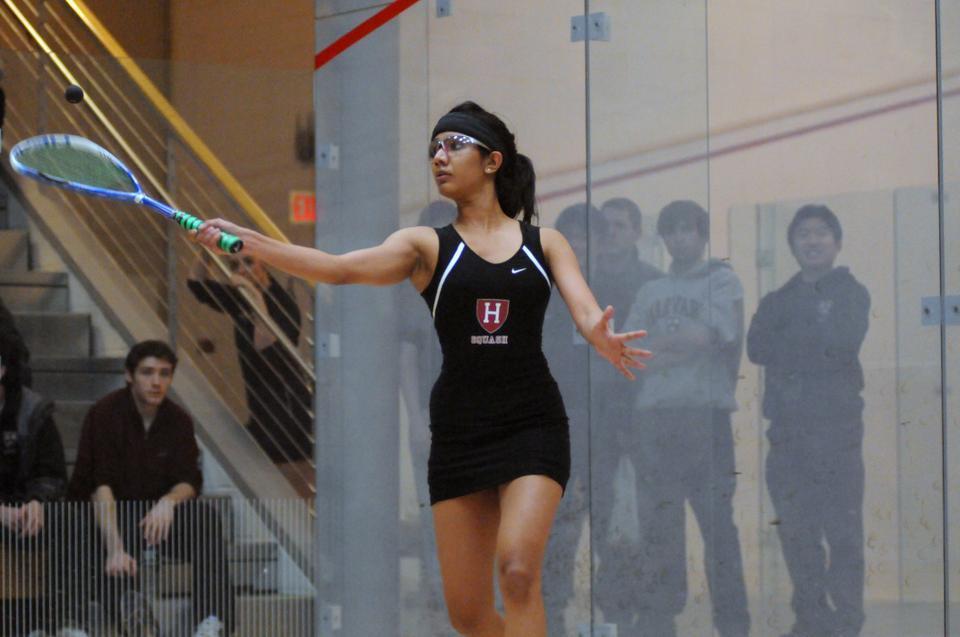 Co-captain Nirasha Guruge, shown above in earlier action, and the Harvard women’s squash team captured a decisive 8-1 win over Trinity on Saturday, preserving the Crimson’s undefeated record and No. 1 ranking in the country. Guruge grabbed a 3-0 win for the Crimson at the No. 3 spot. By EMILY A. PEREIRA
By Marlee Melendy, Crimson Staff Writer

The Harvard women’s squash team (10-0, 3-0 Ivy) remains undefeated as it overpowered Trinity, 8-1, at the George A. Kellner Squash Center on Saturday afternoon, winning its fifth consecutive victory over the No. 5 Bantams (9-2).

“Undefeated” seems to be a word quite familiar to this Harvard squad, as four of its players—freshmen Amanda Sobhy and Megan Murray and juniors Laura Gemmell and Sarah Mumanachit—currently boast perfect records.

The rookie allowed her opponent to score just nine total points over the first two games and kept her scoreless in the third.

“We’re really happy to have Amanda playing at No. 1 with us now,” freshman Haley Mendez said. “She’s been playing great, and it’s huge for the team to have such a strong No. 1 that can guarantee a win. It gives us all a boost of confidence and an edge.”

Gemmell, who went undefeated both in her freshman and sophomore regular seasons, looks to be headed for a repeat, topping Trinity’s No. 2 Alicia Rodriguez to improve her record to 6-0. While Gemmell comfortably won the first two games (11-3, 11-4), Rodriguez rallied hard in the third before Gemmell ultimately prevailed, 13-11, to nab the victory.

The closest and perhaps most exciting matches of the day were at the No. 4 and No. 5 spots, both of which were pushed to a decisive fifth game.

At the No. 4 position, Trinity’s Natalie Babjukova gained an early lead on Mendez, taking a very close first game, 11-9, and then grabbing the second game, 11-4.

But Mendez made a sudden comeback in the third game, overcoming Babjukova to win, 11-7. With momentum swinging, the rookie then snatched the fourth game, 11-6, to tie Babjukova at two games apiece.

In the fifth, the two traded points, but Mendez took the game, 11-9, to complete the comeback.

“[Babjukova] was super quick getting all my balls and it really caught me by surprise,” Mendez said. “So I revised my game plan, waiting patiently to attack until it was the right moment, and I was ultimately able to come back, which was great.”

Crimson junior Natasha Kingshott appeared poised to pick up her eighth straight victory after she gained an early advantage with an 11-9 victory against Bantam Jennifer Pelletier in the first game at the No. 5 spot.

But Pelletier quickly took back the lead, earning convincing wins in the second and third games, 11-3 and 11-5, respectively.

Kingshott came back to win the fourth game, 11-9, but it was not enough, as Pelletier took the fifth, 11-9. The loss was Kingshott’s first of the season and Harvard’s only defeat of the day.

The Crimson clinched its overall victory over Trinity with co-captain Cece Cortes’s win over Bantam senior Andrea Echeverria at the No. 6 position.

After losing the first game, Cortes fought back to gain three straight wins by a score of 11-8.

At the No. 7 spot, Mumanachit extended her undefeated record to 8-0, taking down Trinity junior Robyn Hodgson in an intense five-game contest.

Four of the Crimson’s eight individual match victories against Trinity were earned by freshmen, including Julianne Chu’s 3-1 win in the No. 8 position and Murray’s 3-1 victory playing at the No. 9 spot.

“It was a really big day for us freshmen,” Chu said. “We weren’t expecting to do so well because we knew that Trinity has a very talented team, and so we were especially happy to all come out with victories that day.”