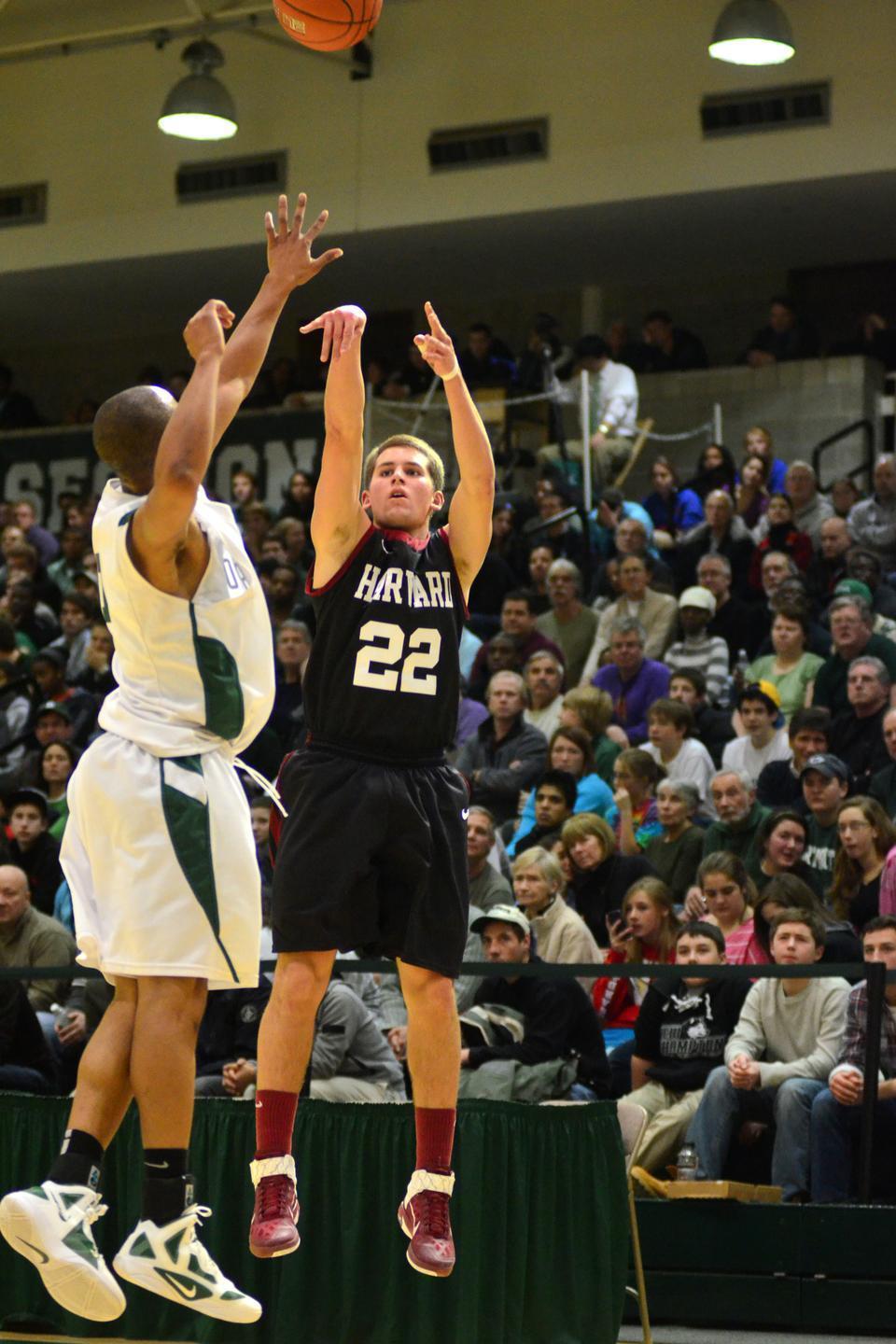 During the Harvard men’s basketball team’s 54-38 win over Dartmouth on Saturday, one of the team’s seven rookies led the Crimson. It wasn’t Kenyatta Smith—ESPN’s 17th ranked center from the high school class of 2011—nor Wesley Saunders—who committed to Harvard over offers from USC, San Diego State, and Colorado. It was Corbin Miller, a 6'2'' point guard from Sandy, Utah.

Miller poured in 13 points, connecting on three-of-four three-point attempts. His performance earned him Ivy League Rookie of the Week and cemented his position as a key role player for the team.

“I think he is a very confident player,” Harvard coach Tommy Amaker said. “I think he is a kid that believes he belongs and is capable. He steps up in big moments and is not afraid to take a big shot, and he has certainly made some for us.”

The freshman guard’s shooting ability was what originally caught the eye of Harvard recruiters.

Miller has continued his accurate shooting as a Crimson player, netting 59.3 percent of shots from three-point range (16 of 27) over the course of the season.

Amaker also emphasized the ease with which Miller has been able to transition to college play, learning the Harvard system quickly.

“I just came in with the attitude of working hard and trying to help the team in whatever way I could,” Miller said.  “[I want to] keep developing, getting used to the college game, learning how to make quicker decisions, and helping to lead when I’m in.”

Co-captain Oliver McNally has served as a mentor and guide for Miller during his first season on the team.

“He really got going in the Atlantis tournament,. He hit some big shots,” McNally said. “He didn’t look as comfortable being a point guard, being a leader…but now, I remember at the end of the Dartmouth game I was saying ‘go ahead, take the ball’ in late-clock situations. He was such a dominant high school player, and he is starting to channel that on the college level.”

Despite Miller’s success on the court thus far, he was forced to sit out three games due to injury.

“We missed [Miller] in a couple of games when he hurt his thumb,” McNally said. “I think it hurt us in the Fordham game because he was playing but he definitely wasn’t himself.  Going into the next few games without him, we missed that presence coming off of the bench.”

But Harvard will have to manage without him next season.

Miller has decided to leave the confines of Cambridge to embark on a mission for the Church of Jesus Christ of Latter-day Saints.

Miller’s absence will be a tough loss     for the Crimson, but the freshman has made an important commitment to his Mormon faith that will keep him from Crimson basketball over the next two seasons.

Yet despite many of Miller’s teammates’ unfamiliarity with Mormonism, Amaker was supportive of his decision and mindful of the consequences for the team.

“We made [Miller’s family] aware of the community that we have and all of the Harvard students who have gone on their mission and come back,” Amaker said. “Once they were comfortable looking at it from an avenue and perspective that this is part of what we have done in the past—maybe not so much a basketball player, but other students here at Harvard—they were very comfortable looking at this as a serious option for him.”

Miller is very clear about his values and priorities.  He recognized the Crimson program and style of play as a good fit for him, while acknowledging the fact that he could maintain his commitment to education and religion as a Harvard student.

“[My faith] is something that is really important to me, and it always has been that way,” Miller said. “It’s really who I am, the things that I’ll be doing.  I’ll be able to go out and serve other people, and share a message that brings joy to my life.”