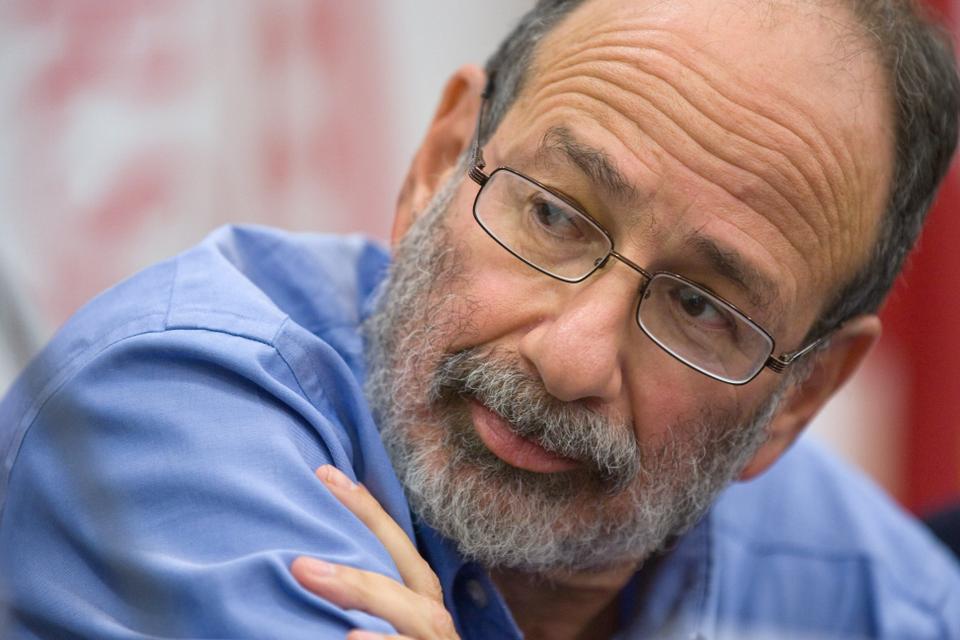 Harvard Business School professor Alvin Roth who is currently a visiting professor at Stanford University, listens at a press conference announcing his award of a shared Nobel Memorial Prize in Economic Sciences on Monday. He shares the prize with Lloyd Shapley, professor emeritus at UCLA.
By Francesca Annicchiarico and Samuel Y. Weinstock, Crimson Staff Writers

Harvard Business School professor Alvin E. Roth was awarded the Nobel Prize in Economic Sciences on Monday morning for his research on market design. He shares the prize, which is given by the Royal Swedish Academy of Sciences, with University of California, Los Angeles professor Lloyd S. Shapley ’44.

Roth, who has taught at Harvard since 1998, is currently a visiting professor at Stanford University and will leave for a full-time role there in January.

At a press conference in Palo Alto, Roth said the call he received in the wee hours of Monday morning was unexpected.“The people who call you up spend a good deal of their effort convincing you it’s not a prank call,” Roth said.

Roth said that he believes that many other economists deserve recogition as well and that his award represents a body of work much larger than his own.

“It’s nice to be the object of attention, but I would also like to deflect that attention to a lot of my colleagues,” he said.

Roth’s work has largely focused on how individuals, companies, and other institutions select one another in a variety of contexts, particularly in markets that do not have prices. He explained that many of life’s most significant events can be explained by “matching markets”—from choosing a school, to finding a partner, to starting a career.

His research has examined organ exchange and the process of assigning students to schools, including Boston public schools.

“The question is how to organize exchange,” Roth said. “We can help our surgical colleagues organize what you could call barter on a large scale [for organ transplants]. Market design is a sort of helping profession.”

Roth’s colleagues at Harvard said that they were happy, but unsurprised, by the award.

“This morning when I read the news I just put up a big smile on my face,” economics professor Gregory Lewis said. “I expected him to win the Nobel Prize at some point; it was just hard to predict the year when it would have happened.”

Lewis praised Roth’s ability to translate mathematical formulas into practice, noting that Roth has made a meaningful difference “in the kidney transplant sector, where market design matters in terms of saving lives.”

“I believe his work is very fruitful and inspiring for the whole field of market design,” he said.

Economics professor Ariel Pakes said that he was excited about Roth’s recognition.

“It’s a wonderful and well-deserved prize,” he said. “It’s great not just for him but for the entire field.”

Roth and Shapley will split approximately $1.2 million as a reward. Roth said he does not currently have plans for his use of the prize money.

Including Roth, 45 former or current Harvard faculty members have won the Nobel Prize in a wide range of disciplines.