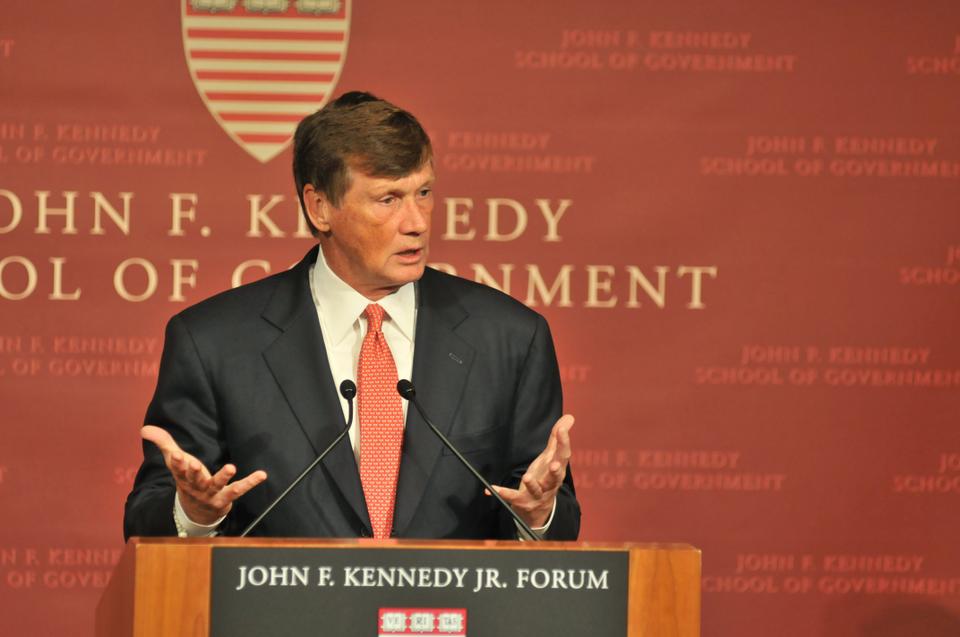 Charles E. Haldeman gives the 2012 Glauber Lecture Thursday night at the John F. Kennedy Jr. Forum. Haldeman spoke about the affairs and operations of Freddie Mac during his time as the company's CEO, which began in 2009 and ended earlier this year. By Alexander L. Jaffe
By Dev A. Patel, Contributing Writer

While most people think of only financial disaster when hearing the names Fannie Mae and Freddie Mac, Harvard students heard the other side of the story at a speech at the Institute of Politics on Thursday night.

Former CEO of Freddie Mac Charles E. Haldeman outlined both the mistakes and the accomplishments of these government sponsored enterprises—called GSEs—during his lecture.

“I hope people have a better understanding of the contributions that Fannie and Freddie have made to the society and some of the unfortunate mistakes that were made,” Haldeman said after the speech.

Haldeman said that the subject of Freddie Mac often gets heated—wearing their workplace T-shirts to the grocery store, his employees have even been accosted—and it is uncommon to hear a fair perspective.

“If I succeed, it may be the first time that there has been a balanced presentation on the GSEs,” he said during his speech.Haldeman, who headed Freddie Mac from 2009 through 2012, addressed the widespread accusation that his company and Fannie Mae were behind the 2008 recession.

“I don’t think they were the cause of the financial crisis, but I do think that they did contribute to underwriting standards because that’s where the competition was going,” he said.

He discussed three options for Freddie Mac and Fannie Mae’s future—a wholly government-run set-up, private companies, or a combination of the two. He said he favored private ownership, with the caveat that the government would still provide guarantees on securities for companies that paid insurance premiums.

But he expressed frustration that Congress had not acted to put any plan in place yet.

“I think the most important thing is to go somewhere soon,” he said. “During the election year, it is remarkable how little the candidates have discussed this, given how important of an issue it is,”

John S. Reidy ’61, a member of the advisory board for the Shorenstein Center on the Press, Politics and Public Policy, said that Haldeman provided a valuable perspective. “I thought it was very revealing, but we were left with the same uncertainty of what is next.”