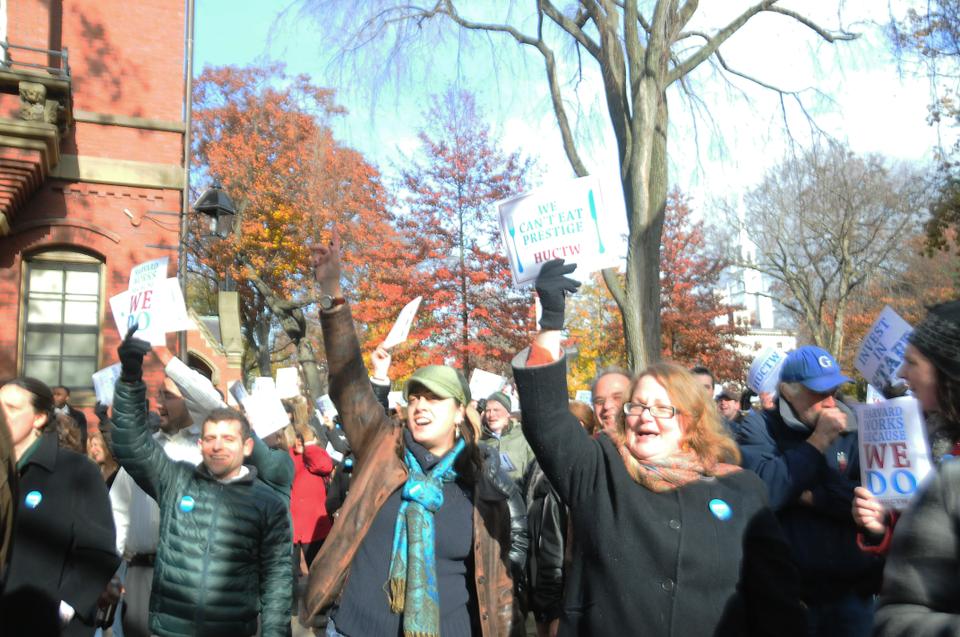 Members of the Harvard Union of Clerical and Technical Workers, students, and other members of the Harvard Community gather in Harvard Yard to rally for a fair contract on November 15, 2012. The HUCTW is asking for a fair contract including raises that keep up with inflation and better health care costs.
By Samuel Y. Weinstock, Crimson Staff Writer

The Harvard Union of Clerical and Technical Workers rallied with its supporters on Thursday in a demonstration of solidarity as contract negotiations between the union and the University drag into their eighth month.

Hundreds of protesters swarmed the plaza in front of Dudley House and raised their voices in chants and songs—at one point, urging the administration to "invest in the staff" in a song set to the tune of "Hey Jude." One woman lifted a sign that read, in reference to a recent pop hit, "We have no contract, and this is crazy. Treat the union fairly, maybe?

"HUCTW, which represents more than 4,600 of Harvard’s non-faculty staff, has been deadlocked in negotiations with the University regarding a contract that was originally scheduled to go into effect on July 1. The lack of "any real significant movement" in the negotiations, as HUCTW Director Bill Jaeger puts it, has led to undesirable delays for union members seeking a contract that calls for higher salaries and more affordable health-care plans.

"I’m standing up for those people who come here every day and give 110 percent," Tasha Williams, president of HUCTW, shouted into the microphone as she stood before the crowd. "We want Harvard to appreciate the work we do."

The "We (Still) Can’t Eat Prestige" rally, which takes its name from a HUCTW slogan more than several decades old, was the third public event organized by the union over the past two months to garner community support.

George Kokkinogenis, a HUCTW member who works as an IT analyst at the Business School, said he hoped the rally would show the University that the negotiations affect the very livelihoods of its workers.

At the rally, speakers gave testimonials and read from letters that union members had sent to high-level University administrators about the personal importance of the negotiations. Musical interludes were provided by the Second Line Social Aid and Pleasure Society Brass Band, a group that uses music in support of social activism.

U.S. Senator John F. Kerry and Senator-elect Elizabeth Warren—also a professor at Harvard Law School—sent messages of support to the union, according to HUCTW officer Peter Berry, who read a letter from Kerry at Thursday’s rally.

"You’re at the very core of the people who make the University hum on a daily basis," Kerry wrote to HUCTW, adding that he hoped for the "fair and equitable contract you deserve."

Harvard spokesman Paul Andrew said the University is committed to agreeing on a fair contract. "We have been proactive in negotiations with the union," he wrote in an emailed statement, "proposing offers that are highly competitive in the market and consistent with agreements reached with other unions at Harvard."