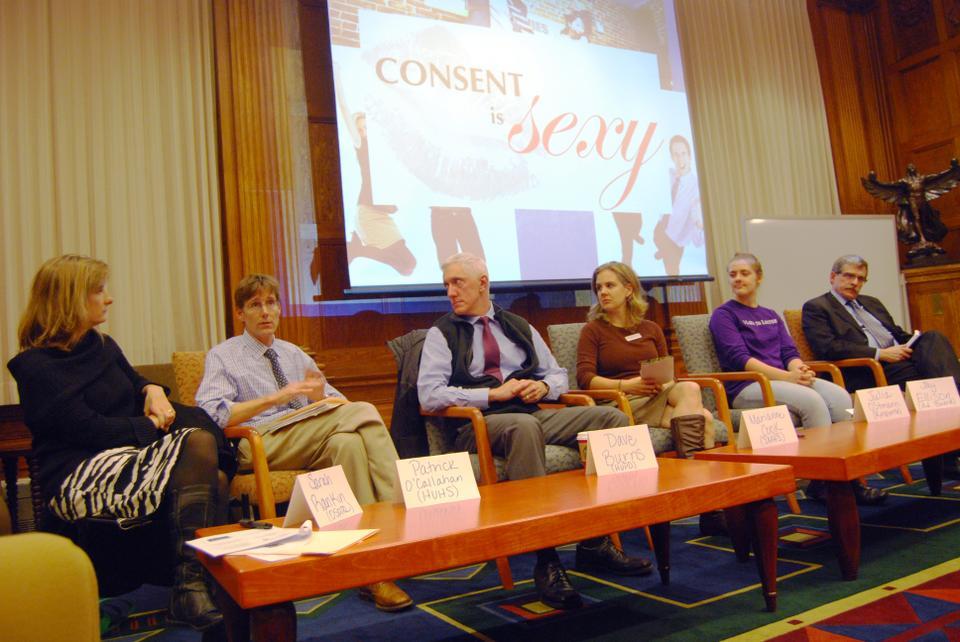 On Wednesday evening, representatives from OSAPR (Office of Sexual Assault Prevention and Response), HUHS (Harvard University Health Services) , HUPD (Harvard University Police Department), SMHS (Student Mental Health Services), Response, and the Administration Board discuss what is done when someone is concerned about sexual assault at Harvard. One major concern from all representatives is the discrepancy between the large number of concerns that OSAPR receives, compared to the very small number of cases brought to HUPD or the Administration Board. By Katharine R Putnam
By Michelle Denise L. Ferreol, Crimson Staff Writer

Representatives from the Administrative Board, University Health Services, and other campus groups sought to clarify the University’s current policies in dealing with cases of rape or sexual assault at a panel on Wednesday evening.

“We want to promote a better understanding of how Harvard handles this issue,” said John N. Azubuike Jr. ’14, vice president of the student group Consent, Assault Awareness, and Relationship Educators. “We need to fill in gaps of information before we have a more evolved dialogue.”

Panelists represented organizations directly involved with sexual assault response on campus, including the Office of Sexual Assault Prevention and Response, the Harvard University Police Department, and the Ad Board.

“Our goal is to make sure that someone doesn’t lose the opportunity to get a degree at Harvard because of something that has happened to them,” said OSAPR Director Sarah Rankin. “Zero percent of these cases are inevitable. They can be prevented.”

Patrick D. O’Callahan, an associate physician at UHS, and Marianne E. Cook ’02, a social worker at Student Mental Health Services, emphasized that students who have experienced sexual assault can avail of their services under complete confidentiality.

“We are here to help people to deal with the emotional and psychological impact of sexual assault and trauma,” Cook said. “Your records are yours and yours alone.”

At the event, Secretary of the Ad Board John “Jay” L. Ellison clarified the process by which students can bring their cases to the University.

The process includes two written statements from each party, committee interviews, and research by an independent fact-finder.

The Ad Board meets with each student to determine whether there is enough evidence to validate the accusation and whether the incident violates Harvard rules, Ellison said.

Ellison added that the Ad Board’s ultimate responsibility is to the community.

“At the end of the day, it really is about integrity, how we treat each other, and how we live together,” he said.