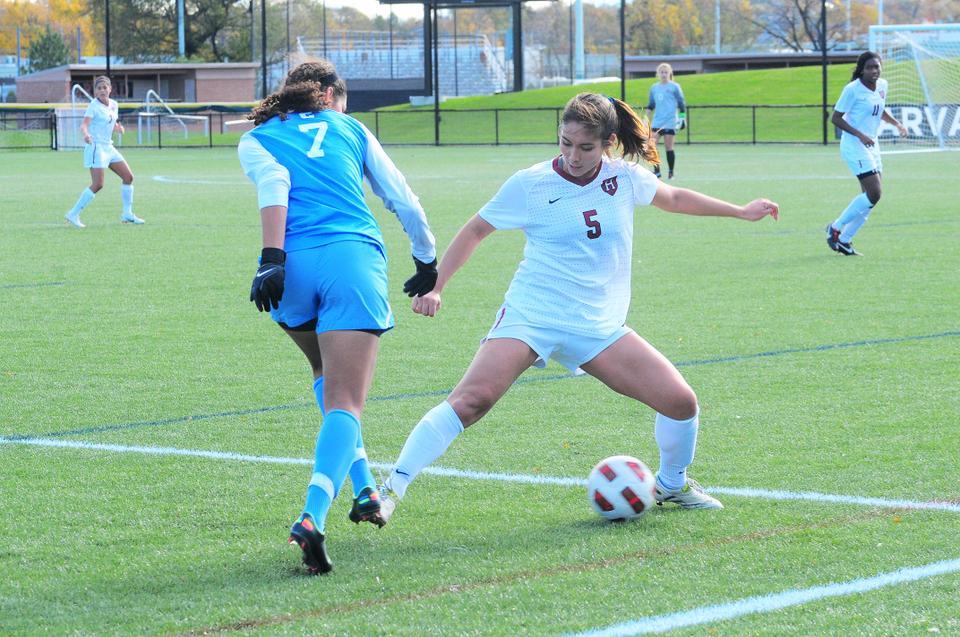 After the first 89 minutes and 30 seconds, Saturday’s game at Soldiers Field Soccer/Lacrosse Stadium between the Harvard women’s soccer team (9-5-3, 3-3-1 Ivy) and Columbia (6-9-1, 2-4-1) stood knotted at 0-0. But as fans prepared for overtime, freshman Brooke Dickens had other ideas.

Taking a cross from senior Aisha Price outside the penalty box, Dickens tapped the ball and sprinted past the outstretched arms of Lions goalkeeper Grace Redmon, heading the ball off the post and into the right corner of the net with five seconds to go.

Dickens threw up her arms in celebration as the bench erupted with cheers and yells. When the clock finally struck zero, with Crimson goalkeeper Bethany Kanten cradling the ball in her hands, the team charged the field and celebrated.

“The plan wasn’t to go into overtime; it was to score in regulation and win the game,” Dickens said. “I knew that the clock was winding down and Aisha saw me waiting for the ball, and she found me and the ball found the back of the net. It’s definitely a lot more pressure at the end of the game because you know you can’t play slowly and relax, and you just have to keep pressuring the other teams.”

Crimson forward Peyton Johnson compared the final play to a Hail Mary with the team playing the ball into the middle of the penalty box and hoping for the best.

“You have one play left in the game, and your only hope is that it finds the back of the net,” the junior co-captain said. “It was a great pass by Aisha and a perfectly timed run by Brooke. It took a lot of courage to put her head in there for the team, and it was remarkable.”

When the clock began to wind down, Johnson said that Harvard had to strike a balance between aggressive and conservative play. While the team did not want to give up a goal, according to Johnson, it didn’t want to miss opportunities on the other end.

“We were deep in our half [when the final minute started],” Johnson said. “That’s when your first motivation is to get it out of their danger zone. Once we find it on the other half, it becomes all forces go and everyone begins to pressure and get more aggressive.”

The group of six seniors—goalkeeper Alexandra Millet, defenders Taryn Kurcz and Catherine Coppinger, who are both Crimson sports executives, and midfielders Alicia Johnson, Alexandra Conigliaro, and Price—led the Crimson to 39 wins over their four seasons with the team. Harvard had 19 wins over Ivy League foes over that time and claimed two Ancient Eight championships, most recently last season. According to Dickens, it was important that the team was able to send its seniors out with a win on Senior Day.

“It’s the last time that some of our girls will ever play for Harvard,” Dickens said. “We love them so much and it’s definitely an emotional time because we are working as hard as we can for them to make this moment great for them. We wanted to end the season with a bang and make their last game a good memory.”

The Crimson totaled 18 shots—11 coming in the second half. But Columbia matched Harvard throughout the majority of the game denying the Crimson many scoring chances. In one sequence in the 55th minute, Redmon saved three separate shots from Harvard players, finally clearing the ball after a series of deflections.

The teams briefly stopped play in the 62nd minute to allow referees to clear out a group of rowdy Crimson fans from behind the Columbia goal, whose raucous heckling was deemed targeted at an individual player—Redmon—prompting the referees to relocate the fans.

Harvard finished the season fourth in the Ivy league and struggled through an early stretch of the season before finishing 6-2-2 in their last 10 games. Over that span, Harvard gave up over one goal only twice (a 4-1 loss to Princeton and a 2-0 defeat against Dartmouth) and had five shutouts over that same span.

The team outscored its opponents 27-23 over the course of the year, led by sophomore forward Meg Casscells-Hamby’s six goals.