Old Quincy Opened Up for Inside Look 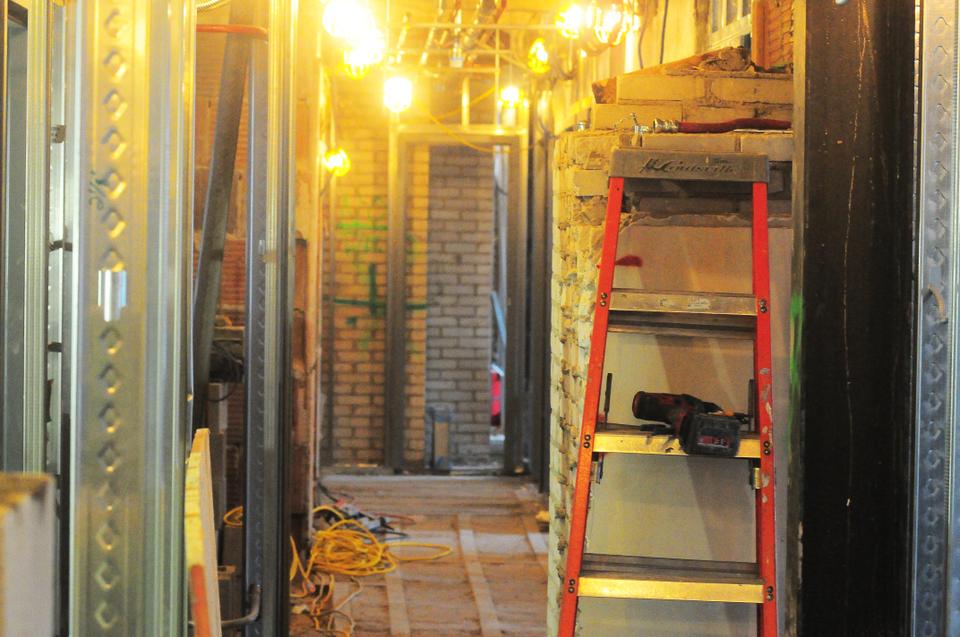 The insides of Quincy are bare and spooky, but construction is well under way and should be done around mid-August 2013.
By Laya Anasu and Jared T. Lucky, Crimson Staff Writers

After stripping away decades’ worth of old paint, the renovators of Old Quincy uncovered the original color of the window frames: “useful gray,” model no. 7050. That shade—an off-white more muted than the bright white on today’s River Houses—now rims all the windows on the Neo-Georgian brick building, just one step in a restoration that seeks to modernize Old Quincy’s interior while remaining true to the building’s 82-year history.

Students can expect better living accommodations and more accessible common spaces inside the building, project managers said during a building tour on Friday. The new design dramatically redraws the floor plan of Old Quincy, which once lacked elevators and subjected students to walk-through bedrooms. New rooms will include a mix of singles, doubles, and four- to six-person suites, and unlike old rooms, insulation will make them mostly sound-proof. Each floor will contain male and female communal bathrooms, with an additional gender-neutral single bathroom. Future residents will also have access to two elevators.

Building designers also incorporated common spaces into each entryway—now two to a floor, rather than one to a staircase—that include printers for each floor and seating areas built into hallway nooks.

Like the common spaces developed in the renovation of Yale’s Colleges—a similar major project which senior project manager Lee Blackwell, who is now running the Quincy renewal, worked on for about 15 years—Old Qunicy will feature new recreational spaces in addition to residential rooms.

An expansive basement multi-purpose room with windows and high ceilings opens onto an outdoor terrace, with a grassy ramp up to the ground level of Quincy courtyard.

Project managers said that they considered installing air-conditioning but realized that current Massachusetts weather would only necessitate its use for a few days each school year. Instead, student rooms will be equipped with new ceiling fans, and during the winter, students will have access to a thermostat that offers limited control of room temperature. Space has also been left in the walls for the wiring and pipes required for air-conditioning units in case climate change makes them a necessity.

Each room will be outfitted with new furniture, including one possible desk with built-in electrical outlets.

Project managers said that they prioritized the historical preservation of Old Quincy, which—along with the rest of the River Houses and a number of other Harvard buildings—is on the National Register of Historic Places. In addition to rediscovering the original paint color, builders sought to use authentic materials in the construction, in one case converting old doors into wood paneling and flooring. The slate roof, which had deteriorated since the building’s construction in 1930, was replaced with shingles from the same quarry in Vermont. Several unsound chimneys were taken down and carefully reconstructed in their original style—of the fifteen chimneys now standing, it is nearly impossible to tell which six are replicas and which are the refurbished originals.

Sustainable design has also been an important consideration throughout the construction process, and project managers said that they hoped to improve the heat efficiency of Old Quincy by insulating its brick walls and chimneys and installing air-tight, double-paned windows instead of storm windows. Additionally, a rain-water accumulation tank will reduce water waste by recycling rain for non-potable uses like toilet flushing.

Although they said that the building was structurally sound, builders faced several challenges common to historical renovations. Designers found it difficult to modernize the floor plan of Old Quincy, which is only 35 feet wide from one exterior wall to the other. Modern architectural wisdom calls for a 65-foot width for a typical college dorm, managers said. Additionally, trained workers had to remove toxic asbestos from some parts of the building. Renovators water-proofed the basement and built pumps to remove groundwater—a constant concern for most of Harvard’s buildings close to the Charles River.

Since construction began in June, the workers—usually 80 to 110 a day—have mostly finished work on the interior façade and will soon tackle the Plympton Street side. The old walls inside have been entirely gutted and replaced by a five-story steel skeleton of the House-to-be lit by construction lamps and soon to benefit from temporary heating.

Old Quincy is set to open in August, just after renovation of Leverett—the next House to undergo renewal—begins in June.