Putting Harvard to the Stress Test 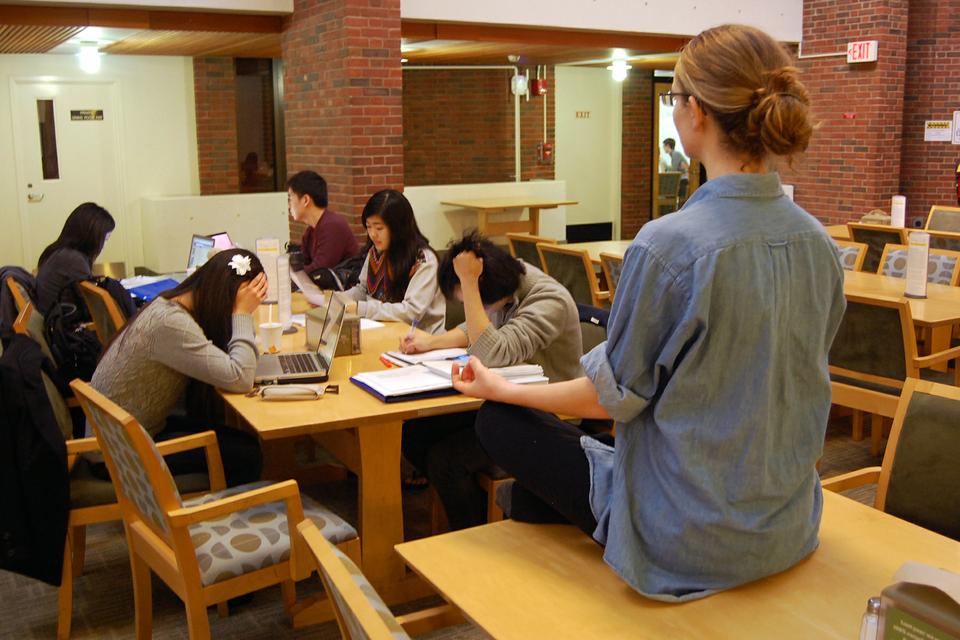 Part III of a three-part series on mental health at Harvard. Part I was published on Dec. 10, and Part II on Dec. 12.

When Harvard University President Drew G. Faust sat down with students in the intimate Kirkland House Junior Common Room in mid-October, much of the talk centered on her book on the Civil War and her recent appearance on “The Colbert Report.” But one student stood up to ask a more serious question.

Trevor N. Coyle ’14 said that he had heard of long delays in care at University Health Services’ overtaxed mental health clinic. He said that those in need of help might never seek that medical attention because as Harvard students, “they feel like they’re too strong” to admit a mental health problem. And he alluded to the three student deaths this year alone, and a suicide rate at Harvard College that is two or more times higher than the national college average.

“Given some recent events,” he said, “I guess I’m interested in seeing whether you think the University should take a preventative measure in terms of mental health.”

Faust responded, “This is a very stressful place.... It is something that is very much on our minds.”

“It’s something that permeates the air here,” Hammonds said. “People are always stressed out, and I don’t think that’s a good thing.”

Earlier this semester, Hammonds launched a committee to examine the issue. The Workgroup on Student Stress, headed by UHS director Paul J. Barreira and Adams House master Judith S. Palfrey ’67, will consider whether the University is providing enough support for students, according to Hammonds.

“What do you do when you get stressed out? Where do you go? What kinds of things do you do to keep yourself well? What sorts of wellness programs do we need to have?” she says, listing questions the group will probe.

The committee will report back to Hammonds in the spring with recommendations for improving campus culture.

While the working group studies the issue, some students are taking matters into their own hands now rather than waiting for administrators’ opinions.

Smile beaming from her face, Arleen B. Aguasvivas ’15 seems out of place as she navigates the Kirkland dining hall. With paper deadlines and final exams nearing, the rest of the 10 p.m. crowd is buried in textbooks or tapping away at their laptops.

But she is not here to study. Armed with lollipops, earplugs, and colorful notes with uplifting messages, this student mental health liaison has come to engage students in non-academic conversations, if even for a moment.

“I really enjoy it,” she says. “I love seeing their reactions. They are all eyebrows furrowed, but then they smile, and it’s truly nice.”

This mobile study break, as Aguasvivas describes it, is just one initiative SMHL puts on during high-pressure testing periods. Founded in 2008 by Barreira, then the director of behavioral health and academic counseling for UHS, SMHL aims to educate students about mental health resources at Harvard.

In the spring, SMHL plans to launch a video, with funding from the College and the help of a professional videographer, based on the popular LGBT-focused “It Gets Better” series.“

The college environment is a tough place. We want students to know that people have struggled and sought help and gotten better, and that that is a normal route,” says SMHL co-president Seth H. Cassel ’13.

Cassel credits Harvard’s peer counseling groups, like Room 13, Response, and Eating Concerns Hotline and Outreach, with providing most of the daily one-on-one support for students.

“There is this whole peer counseling community that is fantastic,” he says. “And honestly, they’re an underutilized resource.”

Alexa, who suffers from bipolar disorder, says that Harvard programs outside of UHS have frequently helped her. “I have found Harvard to be an extraordinarily nurturing environment,” she says.

Mackenzie, who has battled PTSD and depression, credits the Harvard College Queer Students and Allies community for supporting her socially during her time at Harvard.

“People in the LGBT community have struggled with these issues,” she says. “It’s been important to have those conversations in a safe space.”

“I don’t even want to be a doctor anymore...but I don’t have that luxury because I am poor, a minority, female, and first generation,” one anonymous Harvard student confides over Tumblr. “I’m at Harvard—that should be good enough, right? Well, I don’t feel good enough. I feel like I should go to UHS right now to prevent myself from failing 2 of my classes with assignments due in a few hours, but I don’t even have the energy to get out of my room.”

Another writes of having no real friends at Harvard. “I want to have a kind of friendship where it’s more than a few meals and just a group get-together once a month or so. But at the same time, I’m so tired of putting in any effort into my relationships,” the writer shares.

One student currently on a semester abroad posts, “I’m going through the same patterns of stress, depression, self-loathing as before and feel even more pressure to succeed here. My professors, classmates, and host family know I am from Harvard, and everyone knows Harvard, but when the Harvard kid is falling apart mentally and other students are not, it makes people wonder if that student is really from Harvard.”

The blog is just one of several initiatives this semester aimed at spurring discussion on mental health. In November, SMHL hosted a panel in which four Harvard undergraduates—none of whom were interviewed for this series—told the stories of their suicide attempts. The month before, the spoken word group Speak Out Loud invited students to share their experience with mental illness through spoken word, interpretive dance, and candid conversations. Emotions ran high as students reflected on every kind of loss—from that of a friend to suicide to that of a daughter’s relationships with her father after coming out as a lesbian.

Mackenzie felt the open mic night was one of the most important mental health events of the year. “These are the conversations that haven’t happened on campus,” she says.

Alexa feels strongly that such conversations are the only way to reduce the stigma of mental illness at Harvard.

She encourages sufferers to do the most difficult, and crucial, thing—say something.

“There are people available for us,” she says. “It’s so important to find someone trusting. People are not out there to sabotage you. People are there to be helpful.”

Mackenzie too emphasizes the importance of not going it alone. “If you reach out to people, they will understand. They may not understand completely, but they will be sympathetic,” she says.

Looking back at her suicide attempts, Christine recognizes that her story—now one of recovery—could have turned out differently. Today there are still days she takes hours to pray through her despair, but with a mind free from suicidal thoughts, she celebrates her progress toward mental health.