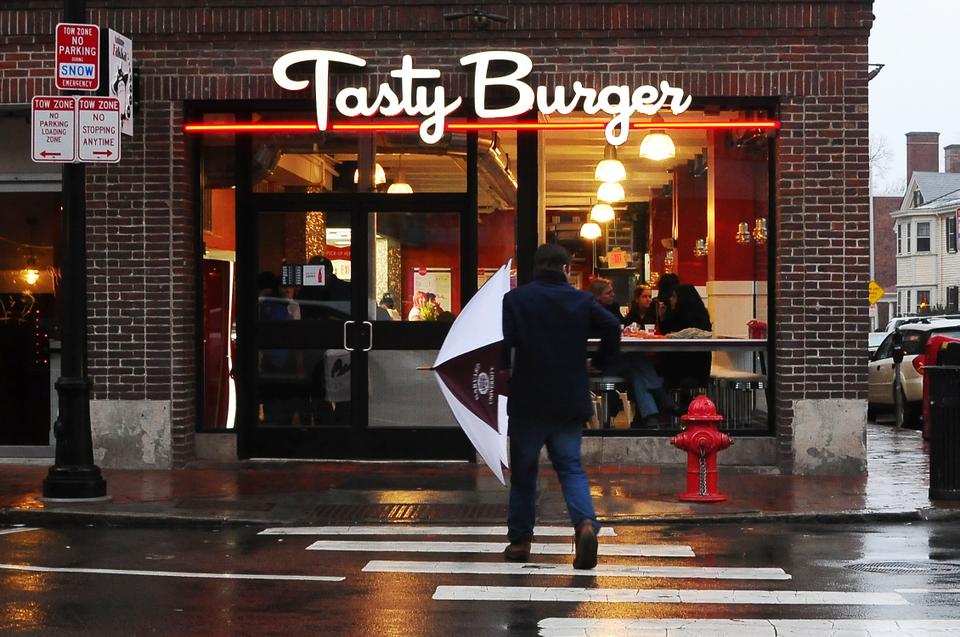 Customers step out of the rain and into Tasty Burger on the restaurant's opening day in the Square.
By Kerry M. Flynn, Crimson Staff Writer

A menu featuring reasonably priced burgers, hot dogs, and shakes—along with a $10 Starvin’ Student deal that includes a hamburger, beer, and fries—drew a constant stream of customers to the official opening of Tasty Burger, Harvard Square’s newest restaurant, on Sunday.

The stairs at the front of the restaurant lead to a cavern-like bar with additional tables and a billiard tables.

According to co-owner David A. DuBois, the restaurant’s long hours, with full service from 11 a.m. to 4 a.m., will appeal to many different demographics.

The Harvard Square location is the third in the Boston area for the company, which also operates restaurants near Fenway Park and in South Boston.

“What the owners hope to do is make this the flagship location for future success,” said general manager Andrew Markey.

Laura Taylor and Dana Zayas had been shopping in Harvard Square and planned to go to another Tasty Burger location until they discovered that the chain had opened a restaurant in Harvard Square.

“They’re going to do really well here. They’ll serve everyone from the workers and students at lunchtime to the late-night crowd,” said Taylor, a Medford resident.

At 11 a.m. on Sunday, R.J. J. Aquino ’13 and several friends rushed to the restaurant to be among the first to try the new restaurant.

“I think we were customers two, three, and four,” Aquino said.

Although Aquino had never been to a Tasty Burger location before, he was excited by the addition of a fast food burger option to the Square.

“I was really excited we were getting a more traditional burger restaurant in the Square. It’s definitely in the same genre as Five Guys, but I wouldn’t call them fast food,” Aquino said.

Markey said that the majority of negative feedback from the first day surrounded the “fast food” concept.

“I think people expected for it to be more of a fast food experience,” Markey said, noting that most did not realize the burgers are cooked to requested temperatures.

Tasty Burger is the area’s latest restaurant to offer a new take on classic American burgers, with Flat Patties, b.good, and Mr. Bartley’s Burger Cottage already established in the Square.

Hoping to grab a burger at Mr. Bartley’s Burger Cottage while in town for his son’s squash tournament, James M. Reum ’68 had been disappointed to see the iconic Harvard Square restaurant was closed on Sundays. But while looking for another option, Reum and his son came across Tasty Burgers.

“You know what I’m going to tell you? The burgers are tasty,” Reum said.

With its long hours and deals, Tasty Burger adds another late-night option for students and Cantabrigians.