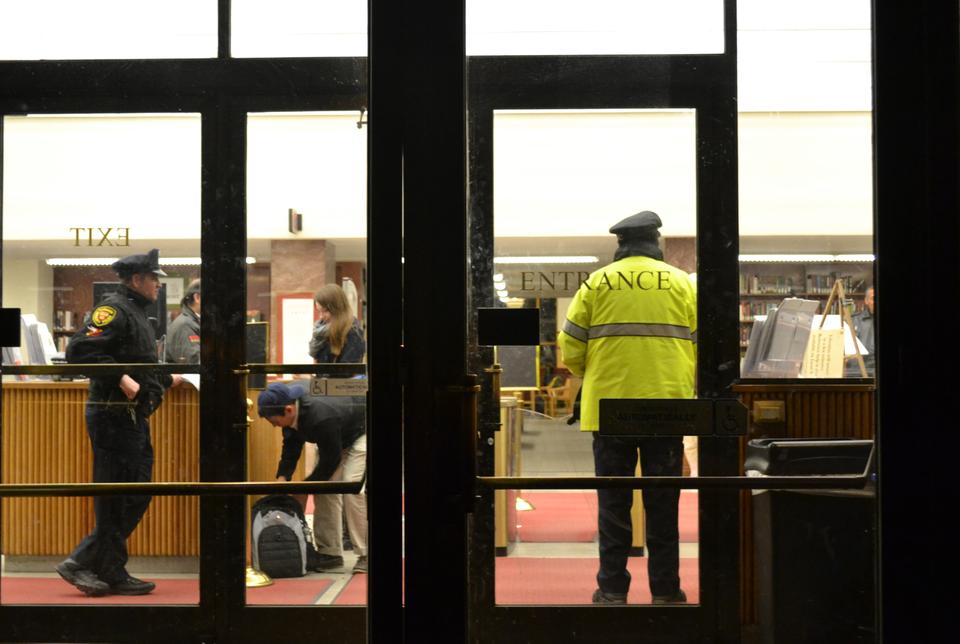 Members of the Occupy Harvard movement parked themselves in Lamont Library Café on Sunday night, pledging to stay in the café until 10 p.m. on Friday in order to protest planned staff reductions in Harvard libraries.

More than 23 supporters of the movement gathered in the café to inaugurate the next phase of their protest, the first to involve a physical occupation since Harvard administrators removed the Occupy Harvard dome from the Yard on Jan. 13.

An undergraduate café employee called the Harvard University Police Department to report the protest, according to an email to café workers obtained by The Crimson.

Police officers arrived on the scene and asked the protesters to remove the banners and signs that they had hung in the café’s windows, according to protester Andrew J. Pope, a doctoral student in history

Pope said that a night supervisor employed by the library told HUPD that the staff supports Occupy Lamont and that the protesters’ actions did not break any library rules.

HUPD could not be reached for comment on Sunday night.

“I hope it makes people aware that the Occupy movement is ongoing, and it’s building toward the future,” said Rudi Batzell, a doctoral student in history. “I think that the location [of the occupation] here is important, especially with ongoing library restructuring. It’s a show of solidarity with the library staff.”

On Sunday, Occupy Harvard also hosted an Occupy Boston Student Summit in Emerson Hall, which was attended by over 80 students from 18 campuses in the Boston area. In Lamont, occupiers chatted with summit attendees by Skype.

Protesters say that the purpose of the new occupation, which they call the “New Harvard Library Occupation,” aligns with the goals of the national Occupy movement that began in September.

“It’s a different movement, but a continuation of the same ideals,” Pope said.

Batzell added, “I hope that it will raise awareness that the Occupy movement is alive and growing. I hope it will connect the local struggle of library layoffs to larger issues of inequality and workers rights globally.”

Protesters said they will give out candy, offer tutoring services, and host twice-daily think tanks to include other Harvard students in their activism efforts.

“The hope is to build relationships with the broader Harvard community, including undergrads and workers, and engage with them in different ways,” Pope said.

Students plan to continue the occupation until Lamont Library, which is open 24 hours a day on weekdays, closes at 10 p.m. at the end of the week.

—Jane Seo and David Song contributed to the reporting of this article.

—Staff writer Eliza M. Nguyen can be reached at enguyen@college.harvard.edu