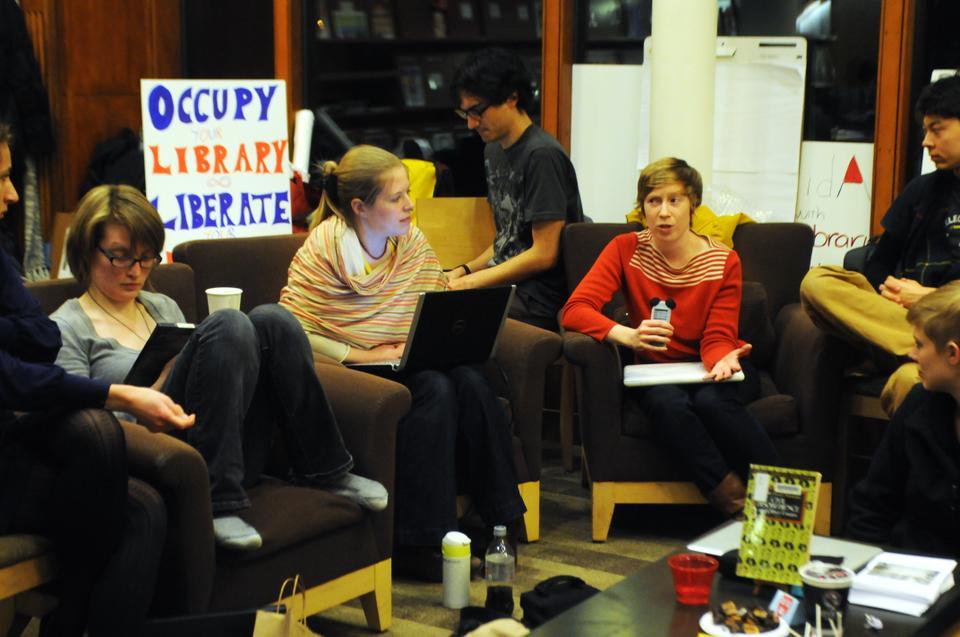 Katherine M. Stevens of the GSAS takes the microphone during an Occupy Harvard-Lamont's "Think Tank" on power, coercion, and the University.
By D. SIMONE KOVACS, Contributing Writer

A day before they plan to end their occupation of Lamont Library Café about 20 supporters of the Occupy Harvard movement talked in the café on Thursday night about the next steps that they will take after they leave this most recent encampment when the library closes at 10 p.m. on Friday.

This discussion was one in a series of small “think tanks” that the group has held twice a day since the beginning occupation of the café Sunday night.

According to a flyer distributed by the protesters on Thursday, the think tanks were intended as a “discussion forum where we will engage and collaborate on topics at the heart of our communities, the libraries, and occupation.”

Protesters said that they created the think tanks to make it easier for participants and visitors to contribute their opinions on a focused topic.

The think tanks framed the discussions around questions such as “Is livelihood a right?” “What does the library of the future look like?” and “What is Occupy Harvard’s relationship with other Occupies both near and far?”

A day after the protesters parked themselves in Lamont, decrying the University's stated intention to reduce the staff of its library system, the University announced a voluntary buyout offer to long-term library employees.

At Thursday's conversation, protesters extended their campaign against staff reductions to a demand for a total reform of the library system.

“To me, if there is a future for...both college and public libraries, it is in the space that they offer in transforming the landscape of knowledge [and] providing the tools and literacy,” said Derin Korman, a teaching assistant in the visual and environmental studies department.

At Thursday night’s think tank, protesters said that they had been successful in their occupation because they raised awareness of their presence in the Harvard community and put pressure on the University administration to make a change in the library system.

Since most of Occupy Harvard’s supporters are graduate students, the protesters at the think tank discussed how to reach out to the undergraduate student body.

They said that their plans for the future include having outdoor think tanks during lunch hours and setting up 48-hour occupations in Harvard Yard when the weather gets warmer.

The protesters also plan on making their presence known during Junior Parents Weekend.

When asked about the police presence in Lamont Library, Harvard Divinity School doctoral candidate Hannah L. Hofheinz said that the police patrol was “ridiculous,” and that “the orders [to patrol Lamont] are not respectful—they are for the purpose of intimidation.”

“The police have had a hard few years, are overworked, under-respected, and under-supported—same as every other group of workers at Harvard,” Hofheinz added. “I really respect the fact that they interact in such a respectful way. They have a lot of integrity.”

Students studying in the café said that the occupiers have not been disruptive.

Claire B. Fitzgerald ’14, a Lamont Library Café worker, said that “we haven’t had any problems. We kept to ourselves and they kept to themselves.”