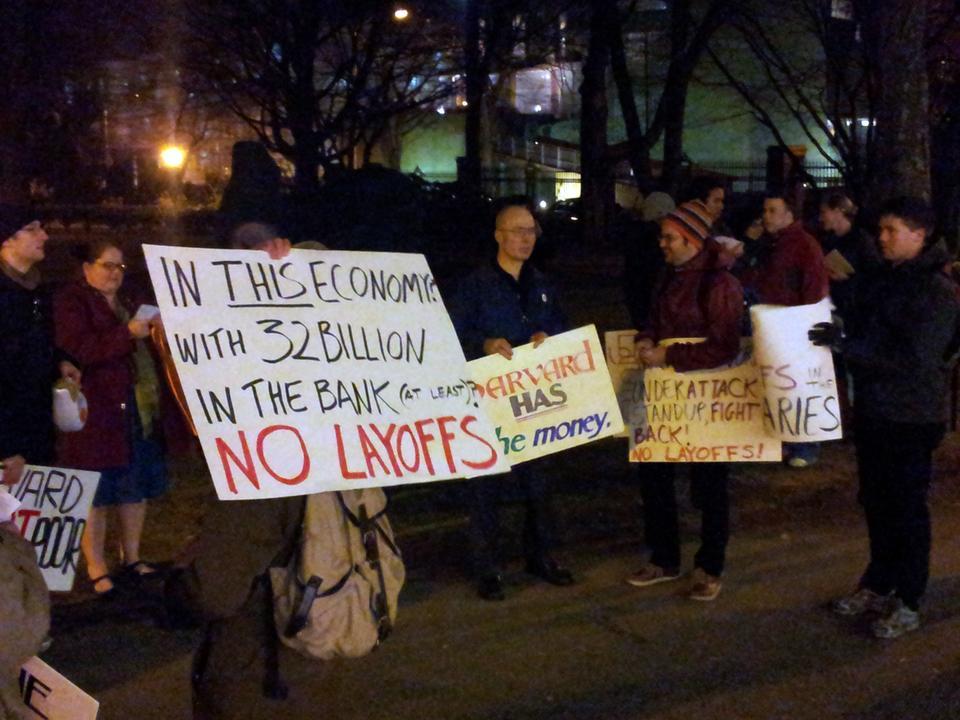 Protesters gather outside Lamont in an effort to prevent workers from being laid off, chanting "They say cut back, we say fight back," and "We are the 99%," among other slogans.
By Mercer R. Cook, Crimson Staff Writer

At the march, Cambridge City Councillor Leland Cheung, who is also a student at the Harvard Kennedy School, made a short statement on behalf of the library employees.

Ralliers carried signs and chanted slogans such as “Hey, Harvard, you can’t hide. We can see your greedy side,” and “The people, united, will never be defeated.”

Rally organizers said that the event, which was planned the day before it took place, was meant to show solidarity between students and librarians in the face of the impending library restructuring.

“We thought it was important to have a rally this week because we wanted to increase Occupy Harvard’s visibility,” said Geoffrey Carens, a Harvard library staff member. “We want as many people as possible to really be aware of what is going on.”

Earlier this year, the Harvard Library Board recommended a restructuring of the University library system. Some library workers have protested elements of the new plan, in particular the University’s earlier hints at the possibilities of job losses and, more recently, the University’s proposal of early retirement packages.

The University has said that it believes the restructuring is needed in order to maintain the standard of Harvard’s library as the premier library system in the world.

“It is indeed because we love the libraries we cannot ignore the challenges they face,” University President Drew G. Faust wrote in an email to the Harvard community last week. “We must direct our resources more effectively to our academic priorities.”

Anna Aizman, a graduate student in comparative literature and a student worker within the library system, said she attended the rally because she believed the new library proposals could have negative consequences for Harvard’s library system by reducing staff.

“In the last four years, library service has really been diluted,” Aizman said. “I’m worried that if we lose any more librarians, either to early retirement or job losses, we won’t be able to give our users as high quality of an experience. Student workers can’t provide the same quality of service that trained librarians can.”

Aizman added that she hopes the rally will help students realize the importance of the issue.

“I think if more people really know what’s going on, they would really care and get involved,” she said.

Andrew J. Pope, a doctoral student in history, said he attended the rally because he felt that it was an important way for students to support the librarians.

“We wanted Harvard to understand that this is part of a global movement against inequality, wherever it may be,” Pope said.

Carens said that this is the first of many rallies to come.

“This is a small event in a larger campaign,” Carens said. “We’ll definitely be back.”

—Staff writer Mercer R. Cook can be reached at mcook@college.harvard.edu