Lin Has Friends, Faith to Thank for Success 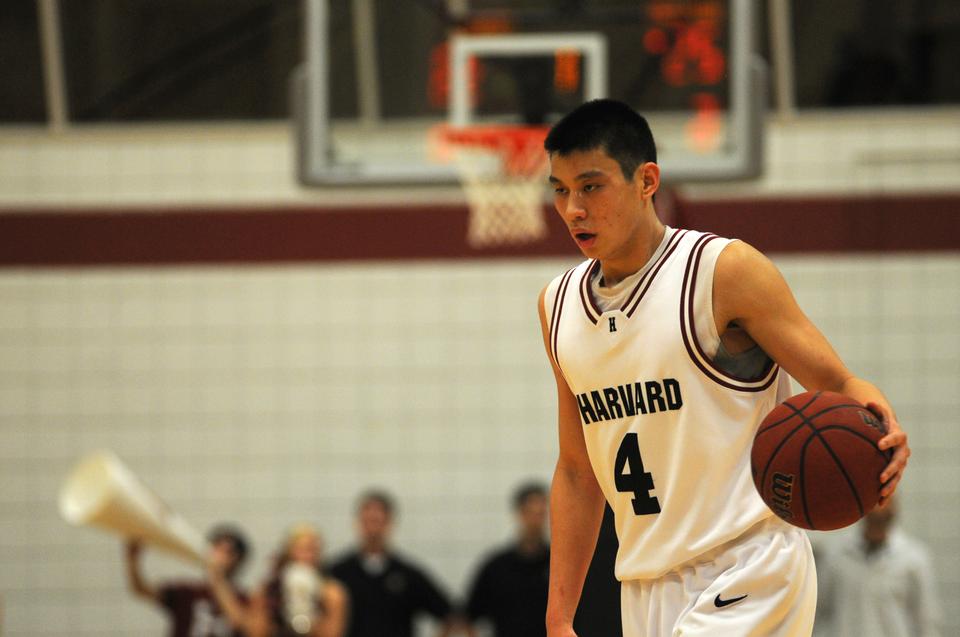 Jeremy Lin ‘10, shown here during a game against Cornell his senior year, has experienced a meteoric rise to fame and international recognition since his series of high scoring games while playing for the New York Knicks.
By Jacob D. H. Feldman, Crimson Staff Writer

Every Tuesday night, Jeremy Lin ’10 and his closest friends gathered in his Harvard dorm room to study the Bible. Listening to the economics concentrator dissect pre-selected verses and discuss how they could teach the assembled students to live better, it might have been hard to believe that Lin would one day become the face of one of the NBA’s proudest franchises.

Two years later, after that dream has come true, it is still tough for members of that Bible study group to realize that the 6’3” Taiwanese-American student they knew is now the newest star of the New York Knicks.

Who could expect Lin’s close friends Kai-Cheng Ho ’10 and Benjamin Wu ’10 to believe the headlines—when, after his first NBA start against the Utah Jazz, Lin talked with them until the wee hours of the morning about Ho’s work and community issues in China?

Even as Lin has emerged in recent days as an international superstar, he has stayed true to the friends and faith that helped get him to where he finds himself today.

Lin forged strong bonds with Wu at Harvard over their shared interest in video games. According to Wu, their game of choice was Defense of the Ancients, a real-time strategy game that pits two players against each other in a battle to destroy the other’s base.

“He was extremely competitive,” Wu said. “Besides his faith, besides basketball, DotA dominated a large portion of his time. It’s pretty hilarious, because you would imagine that he wouldn’t be sucked into these things, but that was a large drag on our free time. I think that just speaks to the kind of person Jeremy is, never indulging in what mainstream society would think a star basketball player would be like.”

Wu said that the two became closer during their senior year when Lin led their Bible study group. Every Tuesday, a group of 8 to 10 students gathered to learn about the Bible and about each other.

Beyond committing his Tuesday evenings to Christian education, Lin went to church near the Quad every Sunday morning. On Saturday, he would text Wu and others, reminding them to go to bed early so they could get their rest before waking up for church. On Sunday morning, Lin and Ho rounded up the others to head over to church together.

“Jeremy’s one of those guys who just never strayed,” Wu said. “He helped me find my motivation and inspiration to get up every Sunday morning and go to church.”

After Harvard, Lin spent two tumultuous years trying to make it as a professional basketball player.

He went undrafted and then had the chance to prove himself to the Mavericks in summer league play. When that team did not sign him, Lin joined the Golden State Warriors. During that time, he shared an apartment with his former Harvard roommate Eric Lee ’10. Lee saw the fringe NBA player struggle firsthand.

“When times were tough, it just made him work that much harder,” Lee said. “It was a roller coaster ride. He was always plugging away, trying to outwork the next guy, trying to better himself.”

At its start, this season was only harder for Lin. He was waived by the Warriors on Dec. 11. Then after joining the Houston Rockets for a few days, he found himself without a team again by Dec. 24.

Shortly after Lin was picked up by the Knicks, he visited Ho’s apartment in New York.

“He was very discouraged,” Ho recalled of that meeting. “Everyone thinks NBA life is glamorous, but they don’t understand how challenging it is. Everyone was telling him what to do and what not to do. At that time, I thought this might not be the right path for him.”

To encourage Lin, Ho brought up the sensation of the moment, Tim Tebow.

“I mentioned to him that Tebow is a guy who had been through the same situation. He was someone who didn’t get enough playing time and then busted the seam—and everything he does is a credit to God,” Ho said. “I see a lot of similarities.”

Lin and his college friends talked for the rest of the night before crashing on couches at around 4 a.m. The next morning, Ho and Wu took Lin to the same church where the two had brought the fledgling NBA player when he was trying to get drafted and again when he signed with the Warriors. Perhaps the third time was a charm.

Still, it took another month of uncertainty and another stint in the NBA Developmental League before Lin’s shot at stardom came along.

Wu sat down to watch the Knicks game on Feb. 4, as he had done every time the team played since his former classmate joined the squad just over a month earlier. Wu was hoping for a blowout so that Lin might get some playing time.

But for whatever reason, Lin came in early against the Nets on that Saturday night, and the rest is history. While Lin was dropping 25 points, seven assists, and five rebounds on an unsuspecting New Jersey team and a surprised world, Wu was just as shocked as anybody.

“I was ecstatic. I was going nuts in my own living room,” Wu said. “It’s amazing what he did that game. I was texting him every five minutes saying, ‘This is crazy. This is nuts.’ I was shell-shocked.”

The amazement hardly subsided when the final whistle blew.

“Watching the highlights come up, everyone was talking about Jeremy Lin, and it was so surreal,” Wu said. “I couldn’t really believe this was happening. But I knew this was real, because we all knew he was capable of this. That’s his game.”

Halfway across the country, in Indianapolis, Ho was at an NFL party on the night before the Super Bowl and could not watch the Knicks game. When he saw someone at the party scanning NBA scores on his smartphone, Ho leaned over to ask how Lin was doing.

“He said, ‘He’s doing pretty well. He’s scored 19 points so far,’” Ho remembered. “When he said that, my eyes lit up. I was...screaming and jumping around. People thought I was crazy, psychotic. I was beyond thrilled.”

That night, Ho gave Lin a call and learned that the newest NBA hit was just as shocked as his two friends.

“He was extremely happy,” Ho said. “He was overwhelmed with everything at that time.”

Two nights after Lin’s breakout against the Nets, he got his first opportunity as a starter against the Jazz. Once again, he exceeded expectations, piling up 28 points and eight assists to secure his spot in the lineup.

But following the contest, it would be hard to tell that Lin’s life had changed irrevocably. He did not go out partying; he did not seek out media attention; and he declined to spend time with the celebrities who wanted to meet the new sensation.

Instead, Lin met with Ho and Wu, as he had done all through college. The three chatted outside of a Papaya Dog take-out restaurant until the wee hours of the morning—not about the fact that Lin was quickly taking the world by storm, but about Ho’s work with the NFL in China.

It was typical Lin, his friends said.

“It was never about him. The last thing he wanted to talk about was basketball or himself,” Wu said. “He wanted to hear about us.”

When Lee called Lin, he noticed, “Nothing’s changed. Our relationship is still very much the same. If I was living under a rock, I would have no idea this was going on by talking to him.”

Lin is changing the attitude on the Knicks—in New York, in Asia, maybe even the whole world. But the world seems not to have changed Lin a bit.

“Who you see in the media, the interviews, is Jeremy Lin,” Wu said. “This is who he is.”