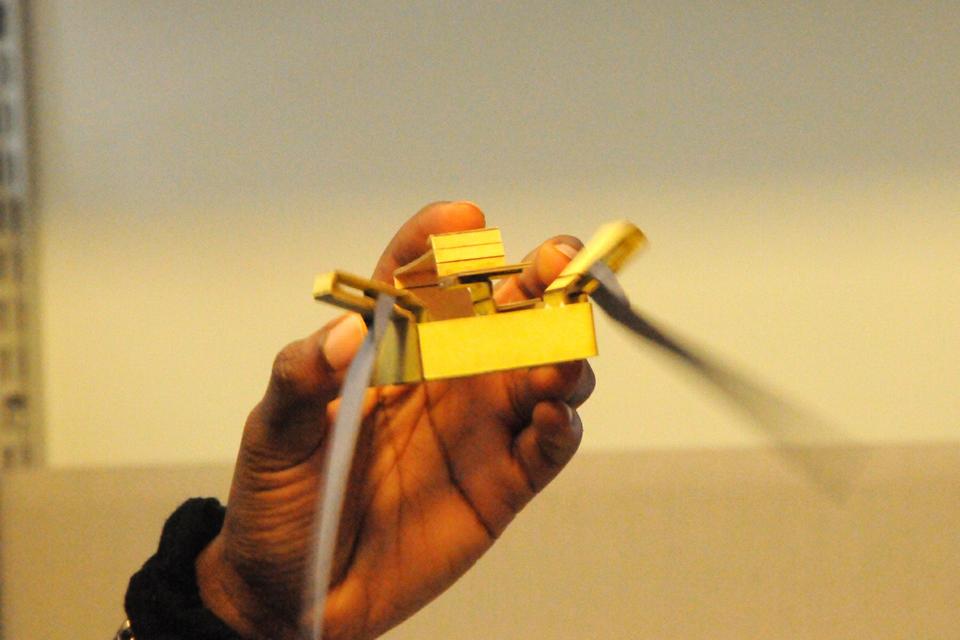 A new fabrication technique for creating robotic insects crawled out of the Harvard Microrobotics Laboratory this week.

The technique, which its creators say was inspired by children’s pop-up books and origami, is the latest development in the RoboBee project, which aims to produce autonomous robots about the size of a quarter.

The new method, which can create RoboBees in a day instead of a few weeks, sprung from frustration with the lengthy original process, which required engineers to individually assemble the robot’s separate components by folding, aligning, and securing them by hand.

The new process reduces the time required and removes the possibility of human error by incorporating techniques similar to those used in the manufacturing of printed circuit boards. The 18 different layers of carbon fiber, titanium, and other materials that compose the Harvard Monolithic Bee—also called Mobee—are stacked and bonded together at once in a flat design.

When lifted by pins, an attached assembly scaffold pops up the flat structure into a 2.4-millimeter tall machine in under a second. The device is dipped into a liquid metal solder to lock the robotic joints and the scaffold is cut away, releasing the Mobee.

“It’s like you’re building two devices; one is your actual robot, and the other is a second robot that assembles the first robot for you,” said John P. Whitney, a SEAS research assistant who helped design the underlying manufacturing methods.

The fully automated process of building the RoboBee can now use a wider variety of materials and allows for the rapid production of clones of the micro-robots by the sheet.

The technology can be used in a variety of commercial applications, as the RoboBees can now be produced quickly by machines.

“Instead of having a skilled craftsman or artisan build one over the course of a week, this process really allows them to be mass-produced for the first time,” said Pratheev S. Sreetharan, a graduate student who led and designed the new process.

Sreetharan can trace the roots of the new method to an off-hand comment made by electrical engineering professor Robert J. Wood.

“Rob made a joke about making something that would function like a ship in a bottle. You’d stick it in, pull a string, and the whole thing would pop up,” Sreetharan said. “We all laughed about it then, but that’s the basic idea behind what we developed.”

For the researchers, seeing the first successful pop-up RoboBees was a vindication.

“It was exciting to see the first ones pop up,” said Sreetharan, “We sent an email saying that we could get all the parts in one set. Wood sent one back saying ‘Seriously? I thought that was 10 years away.’”

The new process has drawn much praise for its implications on micro-fabrication.

“Much like the way that integrated circuits changed the world of electronics, I believe this novel fabrication technique has the potential to open up a new era of discovery and advancement for micro-robotics,” said electrical engineering professor Gu-Yeon Wei.

Computer science professor J. Gregory Morrisett also lauded the laboratory, writing in an email to The Crimson that “Rob Wood (and his team) are geniuses.”

The process may be applicable to the design of micro-surgical devices, micro-sensors, micro-optics, and other integrated electromechanical devices.

The researchers are working to extend their process to integrate printed circuit boards into the mechanical structure of the robots.

Their new method will be featured in the March issue of the Journal of Micromechanics and Microengineering.

—Staff writer Akua F. Abu can be reached at aabu@college.harvard.edu.