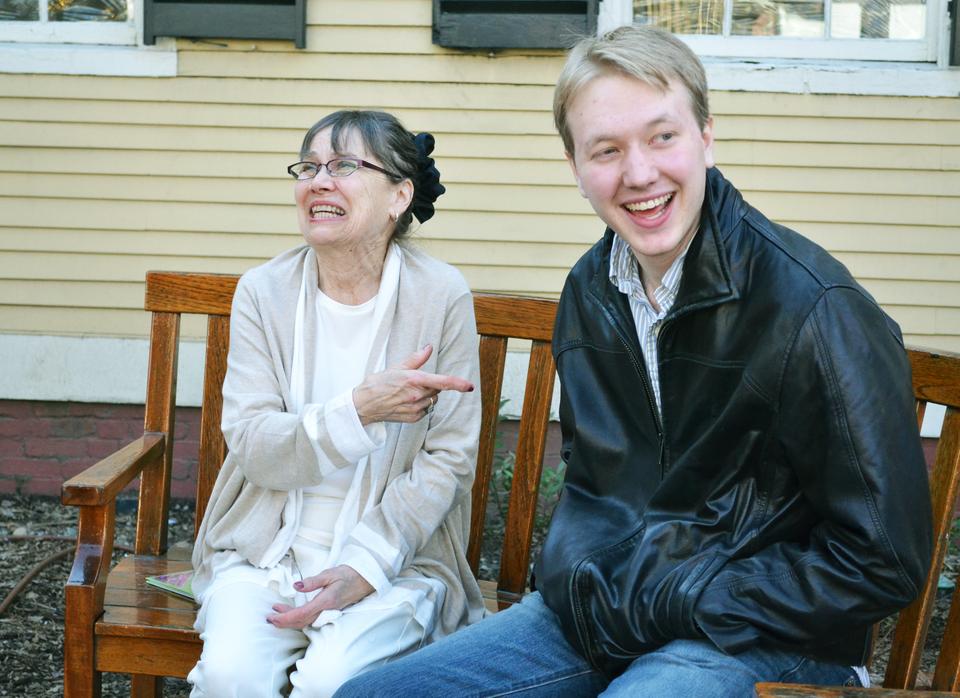 In 2004, William V. Bergstrom ’13 wrote a creative essay for an English class which he later published as a picture book. His grandmother, Anne-Marit “Mumsel” Bergstrom illustrated the book, called “The Magic Telescope.”
By Valeria M. Pelet

In 2004, William V. Bergstrom ’13 wrote a creative essay for an English class which he later published as a picture book. His grandmother, Anne-Marit “Mumsel” Bergstrom illustrated the book, called “The Magic Telescope.” Mumsel is an established artist from Devil’s Lake, N.D. William is an English concentrator living in Winthrop House and an Editorial Chair of The Harvard Crimson. FM sat down and spoke with them about their illustrator-writer relationship. The interview has been edited for concision.

“Jingleheimer is an elf who, in competing for Santa’s Toy of the Year Award, comes up with the idea of creating a magical telescope, and when the kids look at the magical telescope, they can see Santa doing whatever he’s doing all year round. Jingleheimer, for this incredible invention, wins the award and gets to deliver presents with Santa that night.

So I turn it in, and my teacher actually calls me aside after class like, three days later, and says, ‘Will, I really like this, you should try and get it published!’ At which point, I really started thinking about this because it wasn’t my mom. So we looked into it, and we found a company in New Jersey that published it for us. Two years later, in tenth grade, the book was finally published.

I thought the idea of Santa Claus in a bathing suit was hilarious, and I thought we should have a picture of that. Especially for these ones, I was like, ‘Well, I would need to show one where he’s working hard, so can you give me one of those?’ And Mumsel was like, ‘How does this look?’ and I was like, ‘That’s fantastic. I loved that one.’

And then there’s another one in here somewhere where Santa and all of his elves are working. Mumsel was painting them all with different colored suits on in each picture. In this one, they were all wearing little orange suits, but they looked like a bunch of inmates who were doing their community service building toys for Santa. I was like, ‘Okay, Mumsel, we can’t do that, it looks like we’re in the North Pole Correctional Facility right now.’

How would I describe her? Positive would be a good word. Just overwhelmingly positive, which I think helped when you have an eighth grader who’s very staunch about what he wants in his book and bossing you around. I think you gotta be pretty positive to deal with that, even if he is your grandson.”

“It was such a special experience, to collaborate with my grandchild. He came to me and he said, ‘If I were to publish this book, would you do the illustrations?’ and, of course, I was honored. And so I said yes.

He’s always been a good storyteller. Ever since he was very young, he loved words, and he always had a big vocabulary, and just amazing perception.

He would come each day after school to see what I had done that day, and maybe it would meet his approval and maybe not. He would critique! I’ll just tell you that it was wonderful to work with him because he had such a clear concept of the characters in the story. It was marvelous, because here he was, this young man, and yet he was able to guide me.

It’s 7000, population-wise, Devil’s Lake. Adults in the community think of the book as a keepsake. I had a lady call me recently, and she said, ‘You know I have a new grandchild, I need another book, can you get him to sign it?’ The baby was a couple of months old at that time, but she knew it was something the child should have.

There’s just a nice feeling. It’s a good community. A supportive, nurturing environment, I guess. It’s something that happens in a small town, maybe. Maybe it happens everywhere. There’s just so many people that care. And the teachers are so supportive. Now, if she had just treated that like every other paper she got, it wouldn’t have happened. She recognized his imagination and his ability to find the right words. I don’t know, I’m glad she saw what she saw! And I saw what I saw.

He’s very dependable, too. You can depend on him—I can’t explain it. How do you explain somebody you love? What is it Browning said? ‘If you can put it into words, fear to call it loving.’ You know, the love that a grandmother has for her grandchild is something so special, you can’t put it into words.

He’s an inspiration to me. You’re just all so inspiring to me, I can’t explain it, and to know that this is our future, then I think the world is in good hands.

I’m an artist—words aren’t my vocabulary. If I could paint a picture for you, it’d be easier. He’s better at words than I am.”