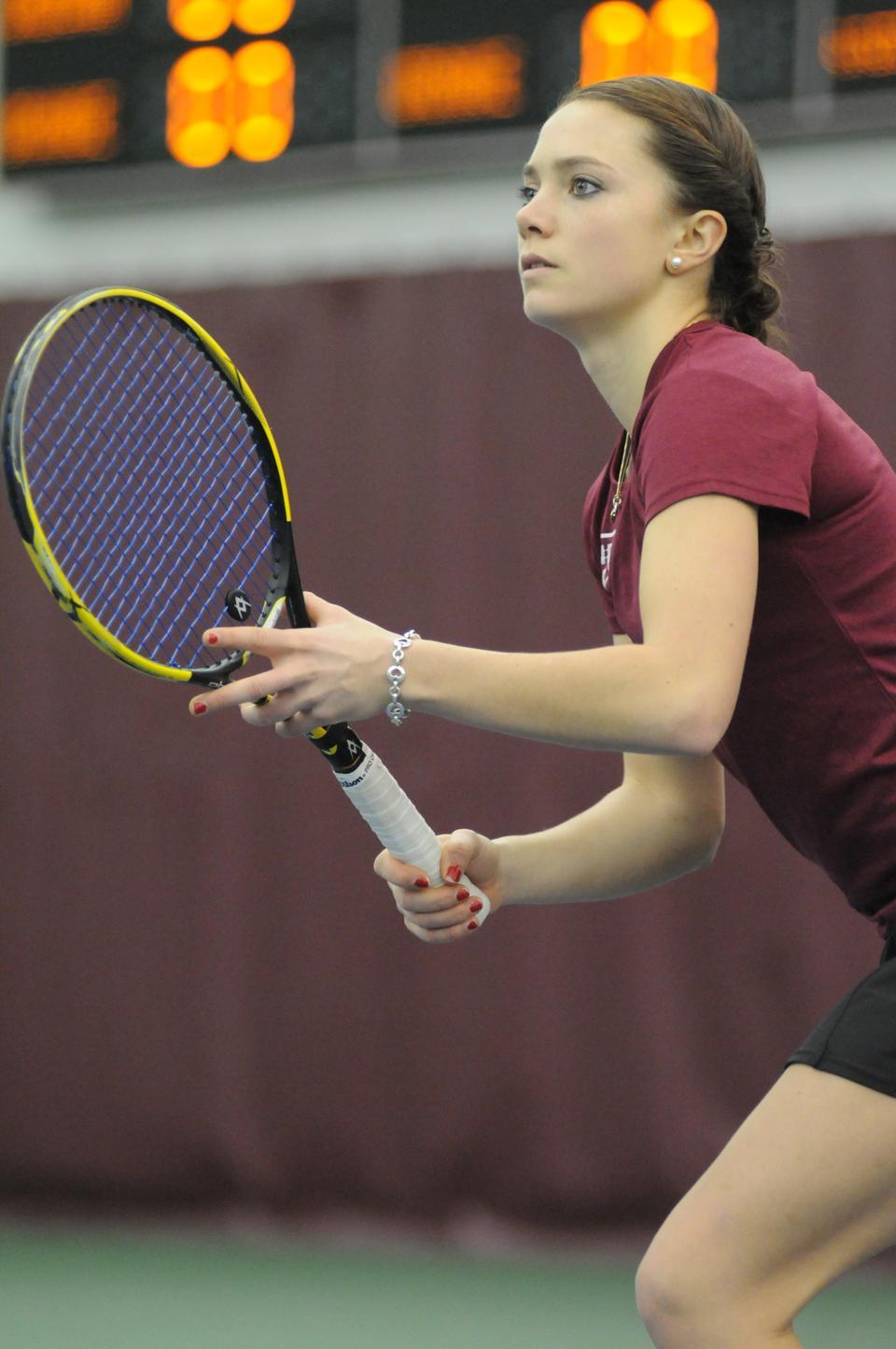 Junior Camille Jania, shown here in previous action, won all four of her contests over the weekend, helping the Harvard women’s tennis team earn a pair of 5-2 victories. Playing at the No. 2 spot, Jania’s straight-set victory over Furman’s Michelle Stanford, 6-3, 7-5, clinched the Crimson’s perfect weekend.
By Taryn I. Kurcz, Crimson Staff Writer

Since its victory on Jan. 29 against the University of Massachusetts to open the spring season, the No. 67 Harvard women’s tennis team had struggled to pull out a win.

But after three close losses in a row, the Crimson (3-3) won both of its matches at the Murr Center this weekend against Boston University and Furman.

“We just took our frustration [from losing] and turned it into energy, and we really took it out on the court,” junior co-captain Kristin Norton said. “We’ve been practicing really hard for these two matches, so we were really proud of ourselves and how we played. “

Harvard won the doubles point in both contests before taking four of the six singles matches en route to a pair of 5-2 victories.

“Every match to us, I believe, is a learning experience and a test to our training that we commit ourselves to every single week,” said junior Camille Jania, who won all four of her matches on the weekend. “We build up all these different tools and skills and endurance as we train, and we want to prove to ourselves just how good we are by playing these matches and using these tools that we’ve developed.”

The Crimson finished its second match of the weekend on Saturday on top of the Paladins (3-6), 5-2.

Jania and senior Samantha Gridley grabbed the first win of the day for Harvard, 8-3, at the No. 3 doubles position.

After the 23rd-ranked doubles duo of Norton and junior co-captain Hideko Tachibana dropped their contest, 8-4, at the No. 1 spot, the doubles point came down to the pair of sophomore Hannah Morrill and freshman Kelly Whelan.

Morrill and Whelan came through, combining for an 8-4 victory over Michele Stanford and Margaret Boyette of Furman.

In singles play, Tachibana and Norton gave the Crimson a three-point lead after quickly topping their opponents, 6-1, 6-2, and 6-0, 6-2, respectively.

“It was a fight in the second set,” Jania said. “But I just kept on doing what I train every single day.”

“These two matches definitely got our confidence back up again,” Norton said. “We have two wins in a row, so we just want to keep it going. Hopefully we can just continue to keep the wins rolling.”

The Crimson’s first win in four matches came over the Terriers (4-2) on Friday afternoon.

Harvard came out strong, capturing all three of the doubles matches.

Norton and Tachibana decisively beat BU’s reigning America East Player of the Week, Leonie-Charlotte Athanasiadis, and partner Jessi Linero, 8-2, at the No. 1 position.

Morrill and Whelan beat their opponent, 8-2, at the No. 2 court, while Gridley and Jania finished on the winning side of an 8-5 match that gave the Crimson a doubles sweep.

“The fitness really showed during our matches,” Norton said. “Despite not being able to look down on the court, we knew that we could outrun our opponents.”

“I think our coach is just mixing up the lineup a little bit,” Norton said. “I think on any given day, anyone can play on every level…. I’ve never played [the No. 1] position before, so I was pretty nervous, but I tried not to think about it.”

On the adjacent court, Jania beat the Terriers’ Stefanie Nunic by default after Nunic retired before the end of the first set due to injury.

Despite sophomore Natalie Blosser dropping her contest, 6-2, 6-2, on the sixth court, Gridley and Whelan both outmatched their opponents to give Harvard the victory.

—Staff writer Taryn I. Kurcz can be reached at tkurcz@college.harvard.edu.